As China's economic and political clout grows, so does the nation's role in the Middle East. The country has already overtaken the US as the largest oil importer. But can Beijing also bring stability to the region? 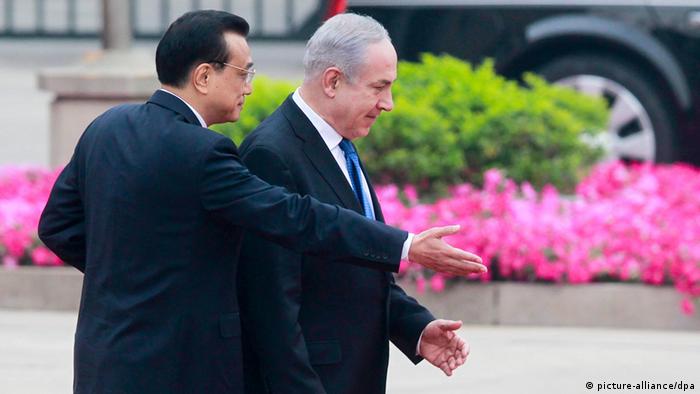 With conflicts raging from Iran to Palestine and Syria to Iraq, the events unfolding in the Middle East are also being closely followed by Beijing. And there is good reason for China's interest in the Middle East. For the past two decades, China has been engaging with the region for the same main reason as other rising powers have: oil. More than half of China's oil imports - some 2.9 million barrels per day - come from this part of the world. And like other growing, industrializing powers, China needs the energy resources to power its economic expansion.

Even as China has focused on diversifying its energy suppliers by increasingly looking to Russia and Central Asia for oil and gas, any instability in the Middle East heavily impacts global prices, thus harming a net importer of energy like China, which surpassed the US as the world's largest importer in late 2013, according to the US Energy Information Administration (EIA).

Driven by the rapid growth in oil and gas imports, Chinese trade with the Middle East has risen from around 20 billion USD a decade ago to an estimated 230 billion USD last year, with the trade volume expected to exceed 500 billion USD by 2020. 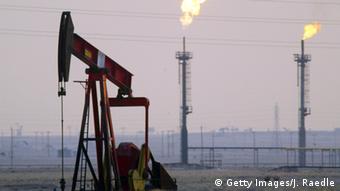 China has surpassed the US as the world's largest oil importer

Around 70 percent of this trade is currently conducted with the six Gulf Cooperation Council (GCC) countries of the United Arab Emirates, Oman, Bahrain, Qatar, Kuwait and Saudi Arabia, the latter of which is China's largest source of imported oil, ahead of Iran. The GCC together accounts for around one-third of Chinese oil imports.

Given the scale of the economic interests involved, China has stepped up its involvement in the Middle East in a number of areas. Just recently, Beijing announced it would speed up free trade talks with the GCC in a bid to cut costs of fuel imports, which are key for the country's energy security.

While oil and gas remain China's overriding economic interests in the region, the Asian giant's fast-growing economy is also looking for new markets for its exports, particularly as developed economies experience slower growth. Sam Chester, analyst at the global investment firm Clarity Capital, explains that China is seeking innovative technologies to import, consumers to export to, and strategic positioning at global transportation routes.

All these factors have pushed Chinese firms to expand across the region, with 22 percent of the companies' global investment flowing directly to the Middle East last year. Chester points out, for instance, that Israel has become a magnet for Chinese investment into its technology sector. As a result, negotiations on a free trade deal with Israel are set to begin this year. 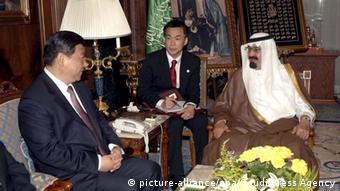 Rajiv Biswas, Asia-Pacific Chief Economist for IHS Global Insight, told DW that Chinese firms have also been playing a significant role in infrastructure development in the region, with an estimated 30 billion USD invested in projects over the past decade, ranging from telecommunication to retail malls. Another example is the Suez Economic and Trade Cooperation Zone in Egypt. Launched in 2009, the special market zone is home to more than 30 Chinese enterprises.

Moreover, Beijing has become a marginal arms seller in the region and one of the leading proliferators of small arms in the world, with Middle Eastern countries as top recipients, according to the United States Institute of Peace.

In light of this development, Andrew Small, China expert at the German Marshall Fund of the United States, explains that almost every state in the region has sought to benefit from enhanced trade and investment with China, while attempting to leverage Beijing's geopolitical heft – whether through support in the UN Security Council or a direct security relationship, for instance for Chinese workers in those countries.

Pakistani-Iranian ties are gradually turning into a hostile affair as the two neighbors continue to engage in border clashes. Analyst Siegfried O. Wolf tells DW why Islamabad needs to re-evaluate its regional policies. (04.11.2014)

Despite being overshadowed by a border standoff, Chinese President Xi Jinping's visit to India marks a new chapter in bilateral ties and shows Beijing has now a stake in India's economy, analyst Gauri Khandekar tells DW. (19.09.2014)

"Even some US-friendly states disillusioned with Washington's handling of the politics in the region have started to turn to China as a potential long-term alternative force in the region, however modest it is for now in political and security terms," Small told DW. The region's view of China at the moment seems so positive that according to a recent Pew global poll, China's favorability in the region was higher than that of the US.

Biswas explains that Middle Eastern states mainly regard China as a rising global economic power and therefore as an increasingly important market for energy and other key regional exports, such as petrochemicals. Beijing has so far managed to keep consistently close relationships with major regional players such as Saudi Arabia, Egypt and Israel; and Turkish ties are in good order after a difficult period in the aftermath of the inter-communal violence in Xinjiang in 2009.

Moreover, as Biswas points out, China continues to regard Iran, which has been shunned by the US, as an important source of oil, and has indicated that it is seeking better military cooperation with the country.

Nadine Godehardt, an Asia expert at the German Institute for International and Security Affairs (SWP), has a similar view. The analyst argues that the Chinese have a rather pragmatic approach to dealing with every country in the Middle East without having a clear political preference: "The Chinese are talking to everyone - even with different factions within states - since they don't want to annoy anyone."

But while China has become what some would describe as an "economic juggernaut" in the region, its political influence still remains minimal. That dichotomy - a Chinese foreign policy that is strong on economics, light on politics - is what analyst Chester describes as "Beijing's global calling card." But the analyst also points out that this balancing act is especially hard to pull off in a region where politics too often trumps all, and there is no shortage of sworn political enemies. 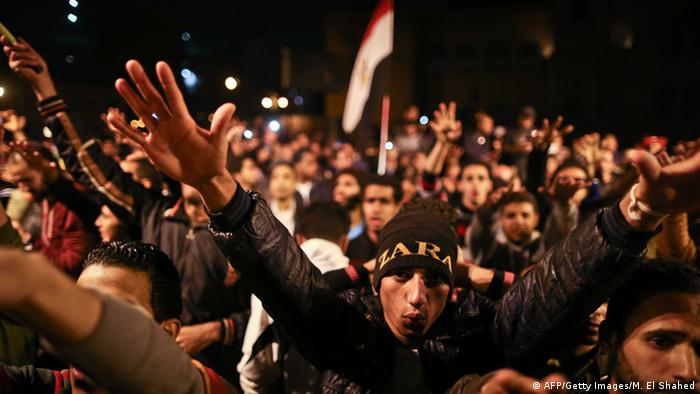 A Chinese foreign policy that is strong on economics but light on politics, is a hard balancing act, say experts

So how has Beijing managed so far to brush off most requests of its regional partners to get more involved in regional political or security arrangements? According to Chester, there are two main reasons for this: First, the US political and security presence is still so strong in the region that there remains no acute need for China to shoulder more responsibilities in the near future.

Second, Beijing's relations with every Middle Eastern state are asymmetric, Chester argues. "China is always the much stronger partner in every relationship and as a result, Beijing sets the terms of its relations with its Arab, Iranian, Turkish and Israeli regional partners."

Local partners are aware of this and so increasingly we can expect to see Jerusalem, Cairo, Riyadh, Baghdad, Tehran and Istanbul jockeying for influence in their respective bilateral relations with China, the Middle East expert added.

Although China's political interests in the region are mainly influenced by its resource needs, the Arab Spring led the Chinese to partially re-examine their ways of dealing with the region. Before 2011, Beijing made little effort to understand or develop ties with domestic opposition groups and was far more reticent about its growing ties with Israel.

But all this changed when Chinese workers were stranded at the onset of hostilities in Libya. Ever since, Beijing has sought to expand ties with a range of groups - best seen in Iraq where Chinese firms and diplomats have reached out to wide range of parties - and has led Chinese officials and companies to openly embrace closer ties with Israel. 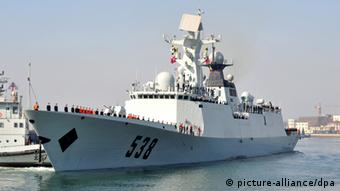 China's direct military role in the Middle East is modest, but growing. As analyst Small points out, the Libya evacuation was the first time the People's Liberation Army (PLA) has sent assets to protect civilians in another region of the world.

The rise of "Islamic State" (IS) has also made the region even more important to Chinese counter-terrorism concerns, with Beijing claiming that hundreds of Chinese fighters have arrived in Syria and Iraq, mostly Uighurs, but even a small number of Hui Muslims.

"Unlike al Qaeda, which trod fairly carefully and tactically around China, IS has included the 'East Turkistan' cause among its list of concerns and its leader, Abu Bakr Al Baghdadi, has made explicit reference to China in his speeches," said Small.

But will Beijing also leverage its significant "soft power" to help resolve conflicts in the region? There are also many who believe Beijing could play a greater diplomatic role in the Middle East Peace Process, as the Palestinians view China as a more impartial actor. But so far these expectations have not been met, with analysts arguing that, in this context, Beijing is still some way outside its comfort zone.

"China still sees itself as a second-tier actor in the Middle East, not as one of the principal external powers influencing developments there," said Small. Beijing has tried to balance the geopolitics of the Middle East carefully, accommodating but restraining the US and European Union's agenda on issues such as Iran, and backing the Russian stance on issues such as Syria while attempting to portray itself as the more moderate, balanced party in its backing for the government of Syrian President Bashar al-Assad's government, he argued.

But this balancing act has been difficult. For instance, Chinese flags were set alight in various Arab capitals following the country's veto of UN Security Council resolutions on Syria. In addition, the country's close relationship with Israel has been criticized by several Arab states.

'Punching below its weight'

Chester believes that China is not filling the political and security space maintained by the US even in situations where Washington has reduced its profile. 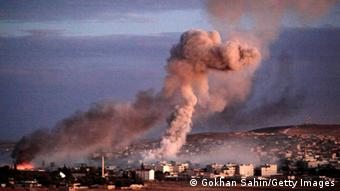 China was criticized following the country's veto of UN Security Council resolutions on the ongoing conflict in Syria.

As China's energy imports from the Middle East continue to grow, the country will seek to strengthen its economic and political ties with the region. But there is so far little evidence of any major security or defense pivot by China towards the region.

"We are still not yet at the stage where China has an evolved political strategy for the region, which still means that while its role as the region's largest trade partner is clearly consequential it still punches below its weight there in diplomatic and security terms," said Small.