Security is tight as demonstrators rally for Unity Day celebrations in Dresden marking 26 years since German reunification. German Chancellor Merkel was met with chants of "Merkel must go" and "Traitor to the people." 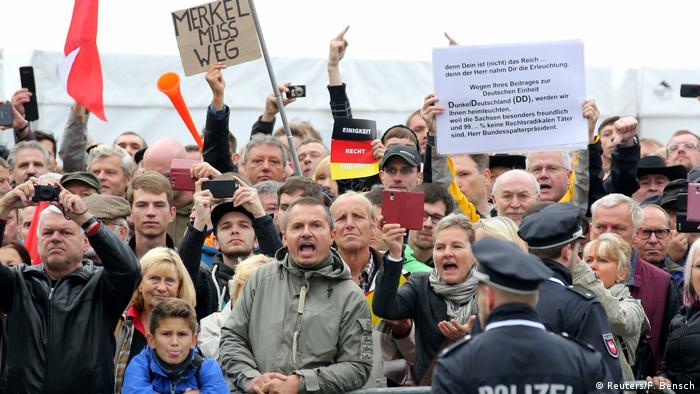 Hundreds of demonstrators loudly protested against Chancellor Angela Merkel before and immediately after an ecumenical service at the Church of Our Lady in Dresden, one of the highlights marking official Unity Day celebrations on Monday.

"Merkel must go", and "Traitor to the people," the crowds chanted, including a co-founder of the anti-Islam movement Pegida, Lutz Bachmann, and many supporters of the populist right-wing party Alternative for Germany (AfD).

Many guests on their way to the ceremony must have felt they were running the gauntlet through the hostile crowd. The wife of Saxony's economy minister broke down in tears. According to DPA, a dark-skinned man trying to enter the church was heckled with ape sounds and calls of "Deport him!"

About 2,600 police officers are on duty to safeguard events in the eastern German city that is home to Pegida, the grassroots movement whose weekly rallies attracted around 20,000 supporters at the start of 2015. Last week, Dresden was shaken by two explosive attacks, one of them targeting a mosque. Late on Saturday, unknown perpetrators set fire to three police cars.

Sharpshooters were deployed on Monday to the Semper Opera building, where about 1,000 guests, including German President Joachim Gauck and Andreas Vosskuhle, the president of Germany's Federal Constitutional Court, were expected to attend the official ceremony.

On Sunday, demonstrators insulted Dresden Mayor Dirk Hilbert for holding a reception for Muslims at the city's town hall on occasion of the Islamic New Year, yelling "Get lost" and "traitor."

"To me, this is still a day of joy, a day of gratitude, but it's also a day that shows us, after 26 years of unity, that new problems await us," said Chancellor Angela Merkel, who grew up in Communist East Germany.

In an interview over the weekend, the chancellor criticized the "shamefully high number" of xenophobic attacks in Germany's eastern states.

Merkel also called on Germans to oppose right-wing protesters who chant "Wir sind das Volk" (We are the people), a slogan Eastern Germans coined in their peaceful 1989 protests before the fall of the Berlin Wall.

German reunification cannot be the central focus of this year's national holiday. The country has been facing new challenges for some time now, and Dresden is the ideal place to address them, says Felix Steiner. (03.10.2016)

Anxiety is rife in the capital of the state of Saxony. Worries and all, Dresden is expecting several hundred thousand visitors for Day of German Unity celebrations. (02.10.2016)

Police have said the incident is the latest in a series of politically motivated attacks in the city. Chancellor Merkel and President Gauck are scheduled to attend the Dresden festival on Monday. (02.10.2016)