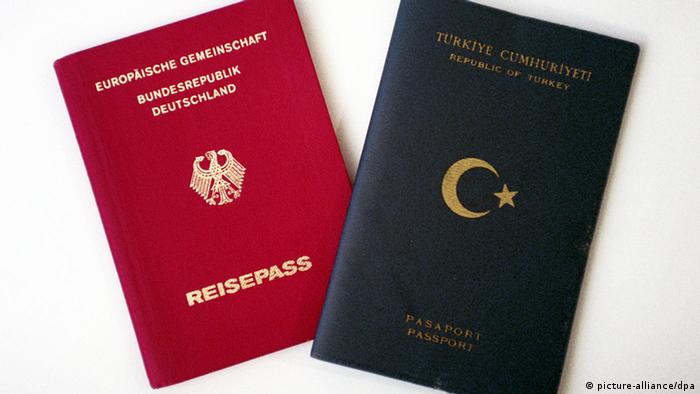 Germany's conservative-liberal coalition government used its majority in parliament on Wednesday to block the draft legislation put forward by the opposition Greens.

"For us, an expression of successful integration means that a person decides for Germany," said Schröder.

It's one or the other

There are, however, exceptions for citizens from other European Union nations or Switzerland. It would therefore have primarily affected Germany's large Turkish migrant population.

Under the current system, introduced in 2000, children born in Germany to immigrant parents receive temporary German citizenship. By the age of 23 they are required to have opted either for permanent German citizenship or for the nationality of their parents.

According to the federal interior ministry an estimated 3,400 young adults, mainly of Turkish origin and born in 1990, face that decision this year alone.

The government's decision to stick to the current "options model" met with fierce criticism from opposition parties on Wednesday. Several parliamentarians accused Merkel's coalition of holding an antiquated attitude to immigration, with some going as far as to accuse the government of holding anti-Turkish sentiment.

"Merkel has said she wants a welcoming culture, and yet the current law on nationality doesn't foster integration but rather forces people to give up their heritage," Oppermann said.

Setting immigration as a campaign issue ahead of the federal election in September, Opperman went on to pledge that a Social Democrat-Greens coalition government would reform Germany's current nationality laws.

Meanwhile Greens' party chairperson Renate Kunast said the proposed law change would have meant that contributions made by immigrant residents were recognized.

Left party parliamentarian Sevim Dagdelen, a daughter of Turkish migrants, described the existing German practice as inconsistent, saying "dual citizenship is granted twice as often for those without Turkish roots as for those with."

Industry keen to recruit from abroad

The opposition demand coincided with a German government push to attract hundreds of thousands of skilled foreigners to Germany to alleviate a labor shortage attributed in part to the ageing of German society.

The research institute Forsa on Wednesday published survey results showing that 53 percent of Germans favor dual nationality, with even a majority among Merkel's conservatives. Only among Bavarian conservatives were opponents in the majority.