Ukrainian President Petro Poroshenko has called for further sanctions against Russia, despite reluctance from Chancellor Angela Merkel. But both agreed that there was "no alternative" to the Minsk peace agreement. 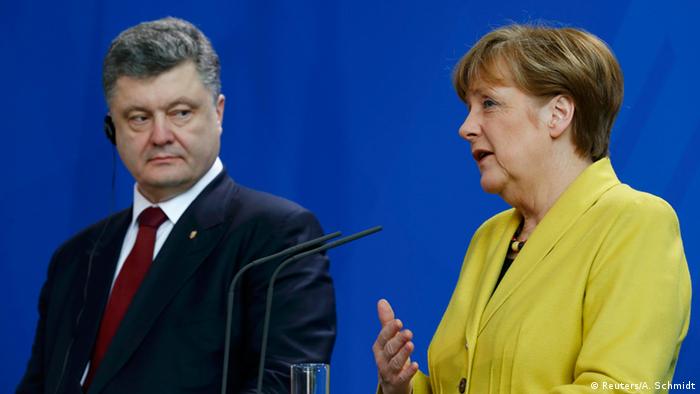 Ukrainian President Petro Poroshenko's visit to Berlin on Monday coincided with the first anniversary of the referendum which paved the way for Crimea's annexation by Russia.

At a press conference following their meeting, Chancellor Angela Merkel emphasized the annexation would not be forgotten, as it "called the peaceful order in Europe into question."

"It is important despite, or because of this, to work for a peaceful solution and not rest until the full sovereignty and territorial integrity of Ukraine is restored," Merkel said.

Poroshenko, who earlier in the day had been welcomed by German President Joachim Gauck with military honors, said he wanted European Union leaders to make clear that they would slap further economic sanctions on Russia if Moscow did not implement the Minsk accord which was agreed in February.

"If the commitments are not fulfilled, and I really hope that on [March] 19 at the summit, that it will be said just as clearly, then the sanctions will continue to be imposed and will be stepped up," he said.

While expressing support for Ukraine, Merkel spoke carefully when it came to the possibility of further bans against Russia. This week's EU summit in Brussels would not result in decisions on new sanctions against Moscow, she said. However, they were up for discussion.

"We are also prepared for new sanctions if need be, but sanctions are not an end in themselves," she said, also lamenting the dire humanitarian situation in the conflict zone. "Unfortunately the International Red Cross hasn't yet been able to gain adequate access to the areas of Donetsk and Luhansk. That must improve."

According to news agency Reuters, the Russian Foreign Ministry has said Ukraine had violated the Minsk agreement and increased suffering by "enhancing the blockade of the Donbass region," limiting citizens' communication and movements, as well as halting gas and other supplies to the eastern conflict regions. 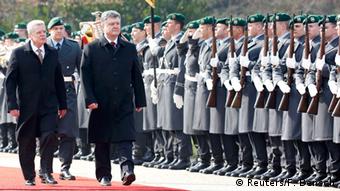 Responding to calls by Poroshenko for Kyiv's allies to boycott the planned 2018 Football World Cup in Russia, Merkel turned the focus back to current struggles.

"I am concentrating on the year 2015. We already have our hands full of things to do, firstly to implement the Minsk [peace] package," she said.

Meanwhile, Ukraine also said it would vote in the coming week on draft bills granting special status to separatist areas in Ukraine's east - part of the Minsk deal - which would give the self-proclaimed "people's republics" of Donetsk and Luhansk more autonomy, but keep them within Ukraine.

Despite the ceasefire, sporadic clashes between the separatists and Kyiv's forces have continued. Both sides have accused each other of breaching the truce. More than 6,000 people have been killed in the conflict since last April. Kyiv and its supporters in the West accuse Moscow of fuelling the fighting by supporting the separatists with money and troops, something Russian authorities have denied.

Throughout their press conference on Monday, Merkel and Poroshenko were united in voicing their support for a political solution to the conflict.

"There is no alternative to Minsk," Poroshenko said.