The leaders of Germany and Ukraine have agreed that there is no alternative to the Minsk agreement for resolving the Ukraine conflict. Both mentioned ceasefire breaches by pro-Russia separatists. 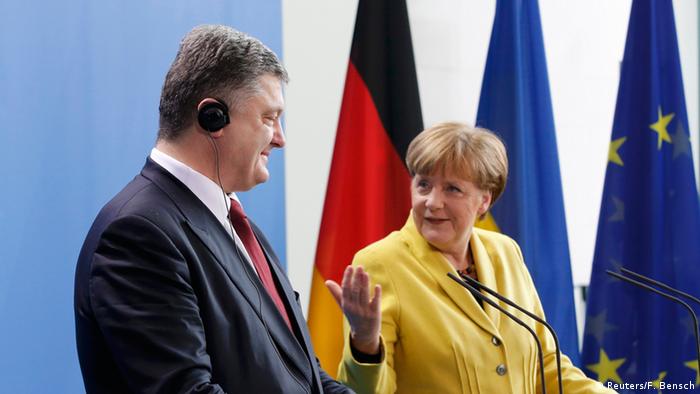 Speaking with reporters in Berlin on Monday, German Chancellor Angela Merkel said that she and Ukrainian President Petro Poroshenko had just concluded a "very intensive" conversation on the situation in Ukraine.

"We will do everything to give this peaceful solution a chance," Merkel said, referring to the February peace agreement signed by Ukraine, Russia, France and Germany.

"There is no alternative to Minsk," Poroshenko said. Earlier, the 49-year-old president had said the Minsk ceasefire was not working.

Merkel said pro-Russia separatists in eastern Ukraine were not yet fully complying with the accord.

"There are considerable shortcomings in the separatists' compliance with the withdrawal of heavy weapons," she said.

According to Poroshenko, Kyiv had filled its side of responsibilities under the Minsk agreement, while at the same time working its own challenges, such as fighting corruption.

"The war cannot be used as a justification to delay these reform efforts," he said.