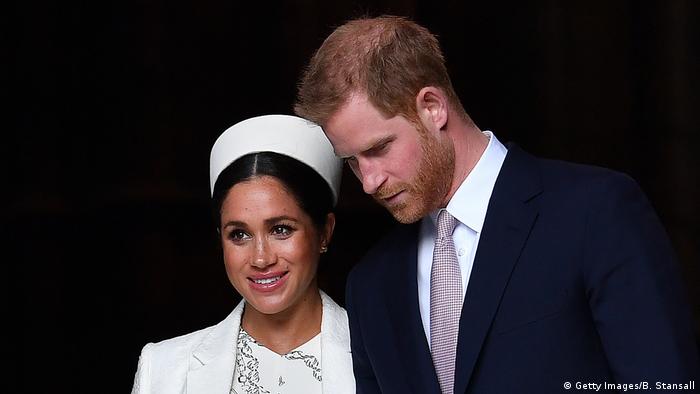 Meghan and Harry announced on Wednesday that they intend to step back as 'senior' members of the royal family and work to become financially independent.

It turned out that Britain's royal family wasn't quite ready for the personal statement emitted by the Duke and Duchess of Sussex, as hours after their announcement, Buckingham Palace issued a second statement pointing out that many issues still had to be worked out before Harry and Meghan's plan could be realized.

Writer Emily Dreyfuss joked on the fact that a family normally isn't a job:

Author Eric Nelson also humorously pointed out that things usually go the other way around, with public personalities quitting their jobs to spend more time with their family.

Author Saeed Jones hinted that Jordan Peele's hit horror film from 2017 might have inspired the move:

Reacting to their plans of "becoming financially independent," Trevor Noah's The Daily Show posted a job announcement for two new employees, tailored to the royals' specific skills, which include speaking impeccable English, being good at waving and having attended one or more weddings that involve swords:

A viral shout-out went to news outlet AJ+: With their headline, "Meghan Markle and her husband," they reversed an old media habit of leaving a famous man's wife unnamed:

Beyond the humorous posts, the hashtag #Megxit is also attached to polarized views on the royal couple's move, reflecting the racist and personal attacks against Meghan also found in the British tabloid press.

In just one example among many more using harsher words, Dan Wootton from tabloid The Sun wrote that Harry and Meghan have sparked nothing less than "a royal civil war."

But words of praise for the unusual decision also poured, including this tweet by Booker Prize winner Bernardine Evaristo encouraging Meghan's decision to "get away from the race hate you've been subjected to in my country."

With #Megxit being co-opted by far-right commentators, one Twitter user offered an alternative hashtag that probably won't become as viral, but it does offer a good final word:

All elements of a royal wedding are dictated by tradition — and perhaps none more so than the cake: A centerpiece often so ornamental that it is not served to guests. Is an organic elderflower cake a sign of change? (16.05.2018)

Who's the cutest royal baby?

As Britain's Duchess of Sussex, aka Meghan Markle, and Prince Harry appear in public with their new baby son for the first time, here are a few other British royal babies who've also had to smile for the camera. (08.05.2019)