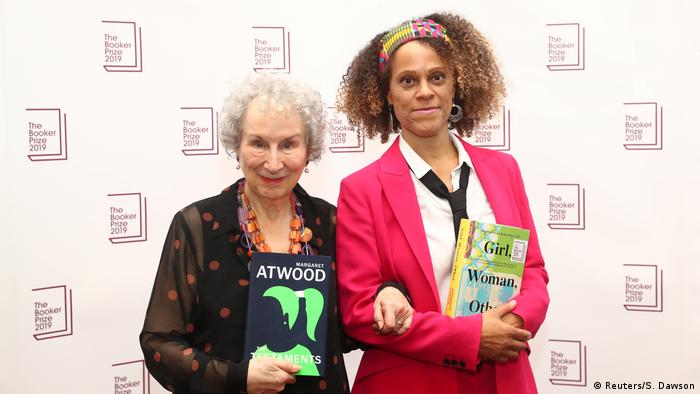 The Booker Prize for fiction this year ended in a tie, with two winners announced on Monday in London. Canadian author Margaret Atwood and British author Bernardine Evaristo both received the literary accolade.

Judges went against the rules by awarding a joint prize, but the panel's chairman, Peter Florence, explained they simply couldn't choose one winner between the two books.

"Our consensus was that it was our decision to flout the rules," Florence said. "I think laws are inviolable and rules are adaptable to the circumstance."

Atwood was awarded for The Testaments, her highly anticipated sequel to her 1985 best-selling dystopian story The Handmaid's Tale. Evaristo was honored for Girl, Woman, Other, which tells the stories of 12 different, mainly female and black, characters living in Britain.

"Neither of us expected to win this," Atwood said in her acceptance speech.

Evaristo is the first black woman to win the prize, while Atwood is the oldest to win, at 79, and had previously been awarded the prize in 2000 for her book The Blind Assassin.

Evaristo said winning the Booker was something that "felt so unattainable for decades."

"So I'm just absolutely delighted to have the prize and to share the prize," she said.

Florence said both of the winning books "address the world today and give us insights into it and create characters that resonate with us."

"They also happen to be wonderfully compelling page-turning thrillers," he added.

Gaby Wood, literary director of the Booker Prize Foundation, said the decision to award two authors "doesn't set a precedent." As such, Atwood and Evaristo will split the £50,000 ($63,000/€57,000) Booker Prize purse.

The Booker Prize, first awarded in 1969, used to be restricted to authors of the Commonwealth countries, the Republic of Ireland and Zimbabwe. International citizens have been eligible since 2013, as long as the book has been published in the UK.

Literature is meant to be provocative, to raise doubts and address issues that are not evident, says Polish nobel laureate Olga Tokarczuk. She never meant her books to be political, she told DW. (11.10.2019)