Rob Greenfield is on a mission to bring a sustainable living message to the world using unusual approaches from wearing the trash he produces and foraging for food to cycling penniless across the US on a bamboo bicycle. 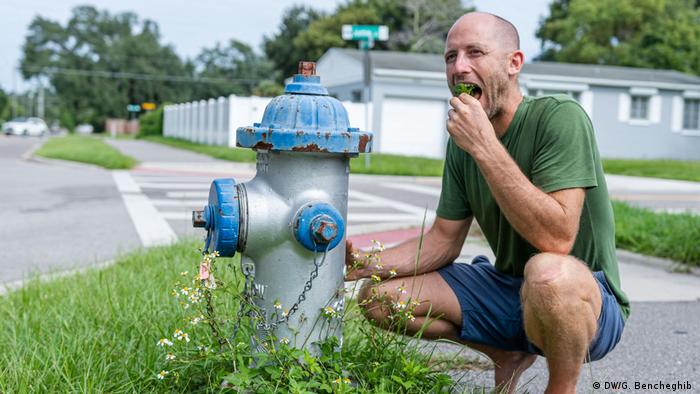 Rob Greenfield bounds over to a plant growing amidst the makeshift garden plots on the grounds of Berlin's defunct Tempelhof Airport. He rips off a leaf and munches on it.

"It's either a radish or a mustard. It's in the brassica family. There are a lot of edible greens around," he says.

He's looking for the edible dandelion he had spotted earlier but is sidetracked by some nettle, which you can eat raw without stinging your mouth if you fold it correctly. It's good for you, he explains.

Read more - Can a minimalist mindset help save the planet?

Greenfield should know. He recently spent a year growing and foraging his own food, while living in a 100 square foot "tiny house" built from reclaimed materials in a backyard in Orlando, one of the fastest growing cities in the US.

"The idea was that people would walk past these gardens and see you can grow an abundant garden full of food rather than a lawn of grass," says Greenfield. 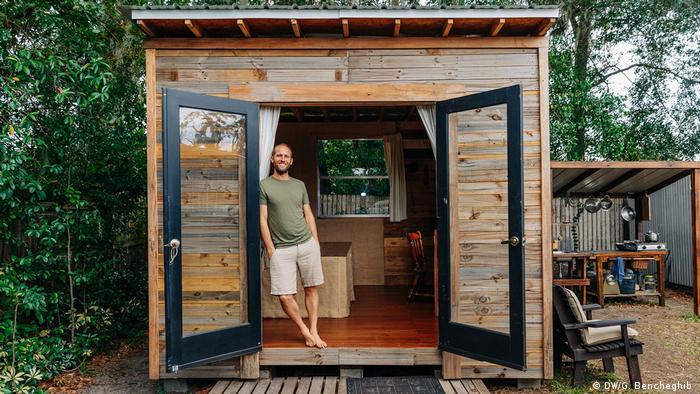 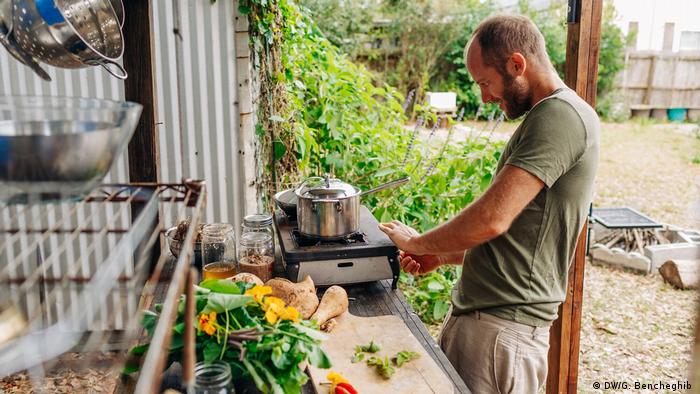 He also wanted to see whether it was possible to live outside the "global industrial food system and live in a way that didn't consume the planet." It was joyful but hard, the Wisconsin native says.

Greenfield happily acknowledges he likes to take things to the extreme. Over the last 10 years, in an effort to be greener and encourage others to do the same, he's lived off-the-grid in a solar-powered tiny home and toured penniless across America on a bamboo bicycle. Today he has minimal possessions and rarely uses money. He donates any earnings, which largely come from speaking engagements, to environmental causes.

The change in his life from a decade ago couldn't be more radical. As a young entrepreneur, he was focused on money, impressing others with his possessions and "living the American dream," Greenfield explains.

But after finding out about the environmental issues affecting the planet, he came to believe that his "American dream was the world's nightmare."

Greenfield switched from aspiring millionaire to green minimalist gradually, implementing one positive change per week — small ones at first — to make it "manageable."

He started by carrying reusable shopping bags and water bottles, biking more, and supporting local farmers' markets before moving to bigger things like avoiding "big box" stores such as Walmart and getting rid of his car.

Read more - Whose fault is plastic waste in the ocean?

But the most difficult thing, he says, was not worrying what other people think.

"I traveled to a lot of parts of the world where the most basic thing [like using reusable bags] will make you look like an absolute weirdo," says Greenfield, as he sits in the early spring sun, wearing a lime sweater and green pants he'd just bought in a local secondhand store.

"I grew up in northern Wisconsin where the idea is just try to fit in. So I had a lot of work to unravel my desire to fit in."

Living sustainably and inspiring others to do the same is what motivates him now. For Greenfield, doing so doesn't involve electric vehicles or huge solar panels on the roof of your house. That's something few can afford.

Instead, he wants people to live sustainably by living simply. As he sees it those who consume fewer resources also waste less. 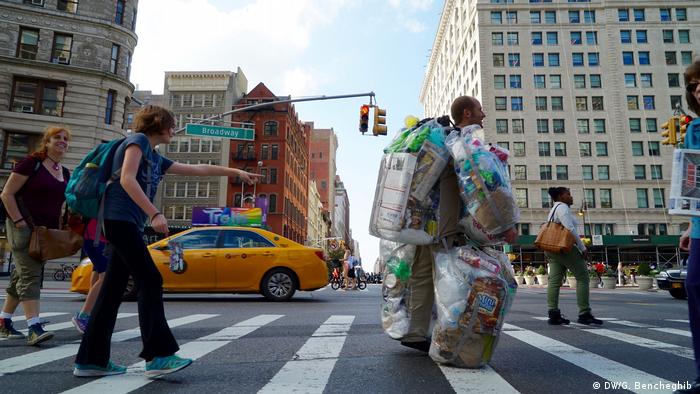 Greenfield's new lifestyle inspired him to make even bolder statements 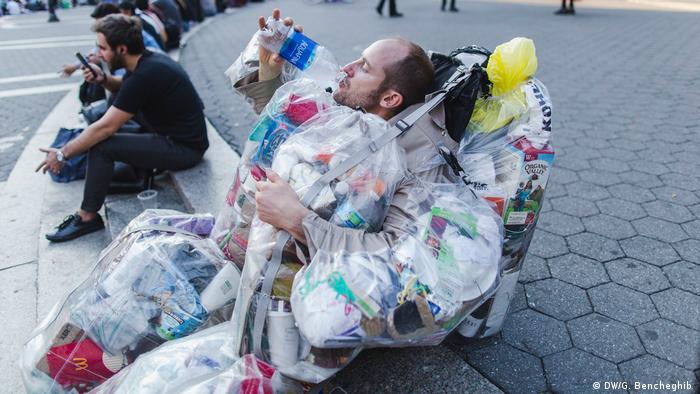 In 2016, Greenfield went to another extreme and decided to live like the average American for a month, producing nearly 4.5 pounds (2 kilograms) of trash a day, and wearing it all. He had a suit with clear plastic pockets made and by the end of the month he was lugging around 90 pounds worth of waste.

Getting around with that much rubbish was a challenge. He had a difficult time getting onto the train and couldn't fit in a regular sized car. But walking the streets of New York looking like a trash version of the Michelin Man got people's attention.

"You could see in their eyes [that] what they saw was: 'You are me. You are a reflection of what my life looks like'," says Greenfield.

Read more - What can music tell us about plastic pollution?

However he's keen not to judge. Trash man was one of the stunts he used to explain complex environmental and social issues in a way that doesn't preach "what's right or wrong," but instead asks people to decide for themselves.

"It's hard to do it all," Greenfield recognizes, adding that he's often failed in living up to his ideals. We exist in a fossil fuel-powered, consumer society that we can push against but one that's not easily circumvented," he says.

"That means sometimes using plastic or transportation that uses fossil fuel when you'd rather not," he says. "But [also] remembering that the world is not a black and white place and that you have to mix into those areas of gray, if we're really trying to change the system today."

No individual can save the world

Greenfield is visiting Berlin as part of his World Solutions Tour, which planned to stop at small cities and towns around Europe to talk about ways to make society more sustainable.

Living Planet: Rob Greenfield on the joy of foraging for food

He's cancelled his events and travels for now due to the coronavirus pandemic. Some are critical that his travels involve flying. He took a flight to get to Europe, but offset his carbon with a carbon offsetting scheme he says is the gold standard; the plan had been to travel by bus and train for the rest of the trip.

Still, he believes he's doing a greater good by spreading his message and highlighting the community-based action already happening around the world — including towns taking the initiative to transition to renewable energy or creating food independence with community gardens, like those on the grounds of Tempelhof airport. It's these local actions he sees as being at the heart of a wider transformation.

Although he recognises individual actions can't save the world, he believes they're also deeply important because they symbolize "an empowered person trying to make positive changes and stand up to the bigger picture."

"In that way, if humanity fails," says Greenfield, leaning back against the rickety faded wooden bench in the community garden, "the work wasn't a failure at all because it improved quality of life now."