Whose fault is plastic waste in the ocean? | Environment | All topics from climate change to conservation | DW | 31.07.2019

Whose fault is plastic waste in the ocean? 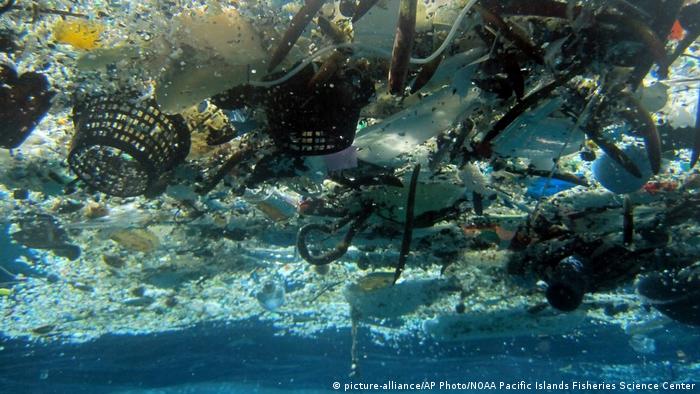 It's an instinct we reach for when told we've messed up: blame. But when it comes to plastics that sully oceans — killing fish and potentially poisoning food chains — it's hard to say where we should point fingers.

Richer countries tend to waste more plastic than poorer ones. Germans and Americans throw away more than 10 times as much plastic a day as Kenyans and Indians. Europe, North America, Japan and Australia have shipped so much to Southeast Asia for recycling that, overwhelmed by waste, Malaysia and Vietnam decided this year to ban plastic waste imports. China had already done so in 2018.

But the few studies to estimate ocean plastic pollution suggest a handful of Asian countries are disproportionately responsible. A study by the Helmholtz Center for Environmental Research, in Germany, has been cited as saying that most ocean plastic comes from 10 rivers in Asia and Africa. Another study, by the Jambeck Research Group at the University of Georgia, found that mismanaged plastic waste — the sort likely to land in oceans — would barely decrease if Europe and North America cut out all plastic.

So, whose fault is ocean plastic. And does it matter? 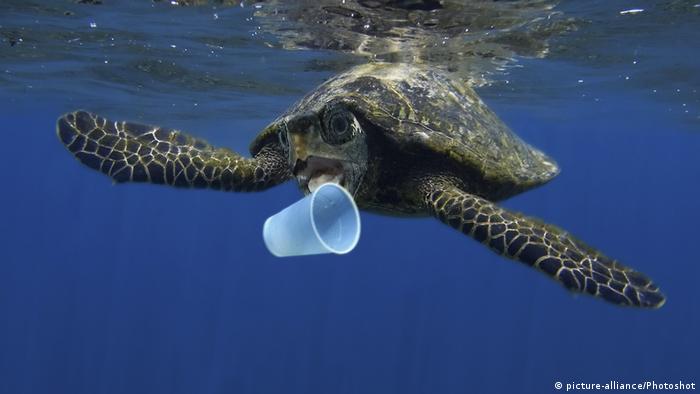 Eating a single piece of plastic can kill a sea turtle 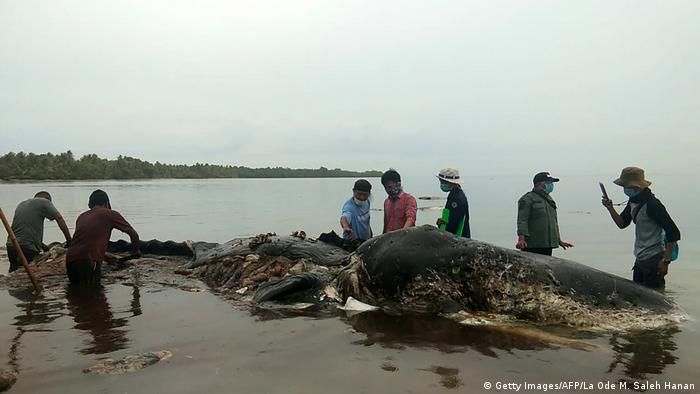 From six-pack drink can holders that entangle turtles to shopping bags that stop up whales' stomachs and cause them to starve, millions of tons of plastic ends up in oceans each year.

The Helmholtz study, published in 2017, was widely misquoted by media as saying 90% of ocean plastic comes from just 10 rivers — eight in Asia and two in Africa. But what the authors estimated was just the plastic that washes in from rivers. They didn't count plastic that enters the sea from sources such as tsunami damage or fishing.

Ocean plastic is more diverse than just the waste that comes from land, said Monique Retamal, a researcher with the Institute for Sustainable Futures at the University of Technology in Sydney, who wasn't involved with the study. "There's a lot we don't know about the contribution from shipping and illegal dumping at sea."

The Jambeck study, published in 2015, found just four Asian countries — China, Indonesia, the Philippines and Vietnam — account for about half the plastic waste that flows from land into the ocean. Europe and North America make up less than 5% because they have better systems for getting rid of waste. Aside from what's burned or recycled, the plastic they throw away into closed landfills is unlikely to leak into rivers.

The study was a first attempt at looking at how much plastic enters the ocean from land, said Kara Law, oceanographer with the Jambeck Research Group and co-author of the study. Without taking the role of waste shipment into account, the waste management data the model relied on showed North America and Europe adequately manage all — or close to all — of their waste, she said. "And we know that's not true." 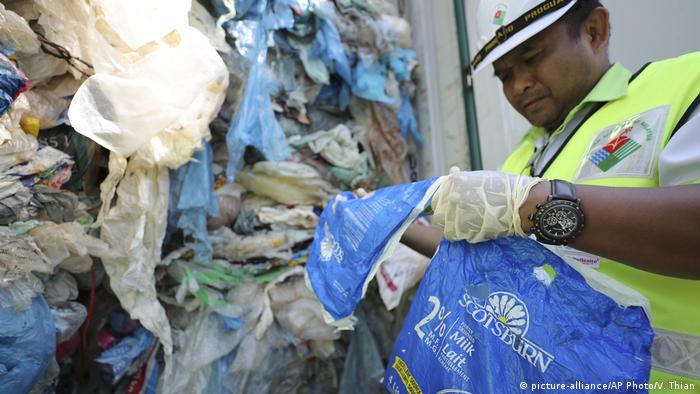 When China banned imports of most plastic waste in 2018, the world's recycling system went into shock. China had previously been the world's biggest importer of plastic waste. With nowhere for Western waste to go, the price crashed, and companies in Southeast Asia started buying it up to recycle it for a profit. But unprepared for the quantities coming in, and without the plants to process it, governments have increasingly cracked down.

Malaysia, Indonesia and the Philippines have in the last two months sent back dozens of containers of supposedly recyclable plastic to Europe and North America. In many cases the plastic was contaminated with other waste such as diapers and electronics. Several countries in Southeast Asia have banned plastic waste imports or revoked import permits.

Law says she is working to reevaluate the contributions of the US by looking closer at illegal dumping and waste exports.

It is unclear how much traded plastic ends up in the ocean. Between 2010 and 2016, when China was seen as the "world's dumping ground," it imported just a tenth of its plastic waste. Most waste stays where it was made, said Arnaud Brunet, director general of the Bureau of International Recycling in Brussels. 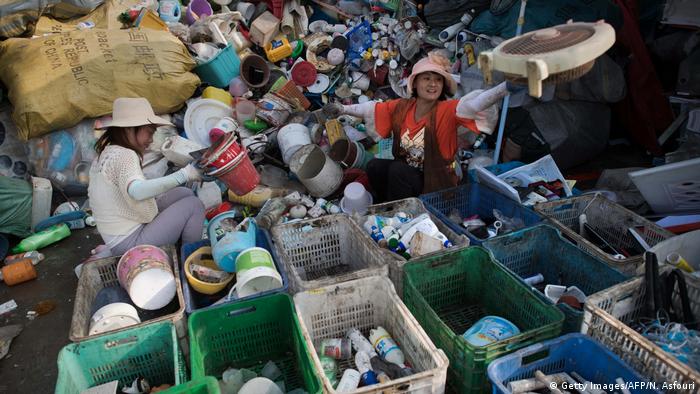 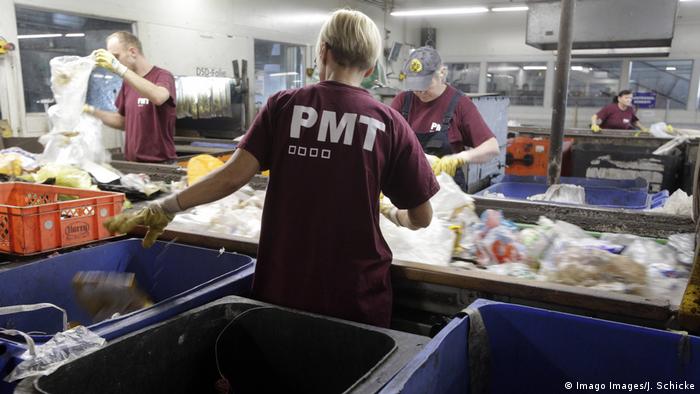 Since 1950, plastic production has increased about 200-fold, the Jambeck Research Group estimated in a separate study. Just 9% of plastic ever made has been recycled. The rest was burned or thrown away into landfills or nature.

Because plastic is so tough, it can last for centuries without breaking down. That means plastic made in the past, mainly in richer nations, has accumulated, often in the ocean. Experts say this, along with the lack of data on plastic from marine and other sources, makes blaming individual regions for ocean plastic unhelpful.

"I see it largely as a finger pointing exercise," said Law, the oceanographer. "Our biggest fear when we published the Jambeck paper is everybody would just say it's China's fault — and some people did that."

But, she added, "we also got a lot of feedback from people in Southeast Asian countries saying, 'thank God somebody pointed out the lack of infrastructure.'"

A study published in January by the Ocean Cleanup Foundation, a non-profit organization trying to rid the oceans of plastics, estimated that mismanaged plastic waste generated each year could triple by 2060 if we continue to throw away plastic as we do now — with Africa and Asia disproportionately affected.

Poorer countries can mitigate this as they grow richer by investing in waste infrastructure such as recycling centers and secure landfills. Richer countries can help by reducing their plastic waste and dealing with more of it at home.

"No country should be used as a dumping ground," said Heng Kiah Chun, a campaigner at Greenpeace Malaysia. "This is a global problem that we need to stop together."

After 12 days of negotiations under the auspices of the United Nations, countries have agreed to treat plastic as hazardous waste. Germany is considering a ban that would go even further. (11.05.2019)

In a bid to clean up the islands of garbage streaming across the world's oceans, a new system designed to collect millions of tons of plastic is to be launched in the Pacific by the end of the year. Julian Ryall reports. (16.05.2017)