Russian President Dmitry Medvedev's visit to Poland is expected to have a great impact on future Polish-Russian relations. The two heads of state have agreed to set up a memorial to the victims of the Smolensk disaster. 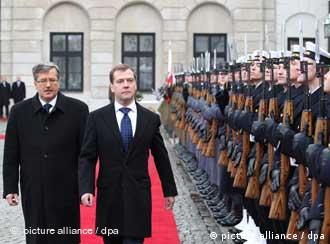 The decision to dedicate a memorial to the victims of April's plane crash in Smolensk, Russia was considered the most significant agreement made during Russian President Dmitry Medvedev's visit to Poland on Monday.

Poland's then-president Lech Kaczynski and 95 other victims were killed in the plane crash while on their way to a commemoration of the Katyn massacre.

Medvedev vowed that the Russian side of the crash investigation would be objective, and he promised to assist in uncovering the full truth of the Soviet massacre of Polish officers in World War II.

"I'm convinced we are beginning not only a new chapter in Polish-Russian relations, but also a good chapter in the book of bilateral relations that we have been writing for the last 1,000 years," said Polish President Bronislaw Komorowski following his meeting with the Russian president.

Medvedev was given a very warm welcome. Following talks between the two delegations, Komorowski told a news conference that the dry spell in relations with Russia was definitely over. 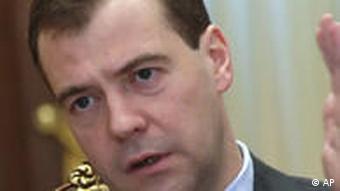 "It will probably be a very long road, but we are determined to go down this path and many goals will be defined jointly by Poland and Russia," Komorowski said.

Komorowski added that the focus of the talks had been on the economy, prospects for developing transport infrastructure between the two countries, building bridges between the two nations based on a new system of youth exchange schemes and developing links with the Russian Kaliningrad enclave squeezed between Poland and Lithuania.

Medvedev also spoke about Poland's new role in helping Russia forge relations with the West. "We are currently building multidimensional relations with the EU and NATO. The involvement of our Polish colleagues will be conducive toward resolving issues that emerge during this dialogue," he said.

The Russian president also spoke about Moscow's determination to get to the root of difficult moments in Polish-Russian history, notably the Katyn forest massacre during World War II in which thousands of Polish POWs were executed on Stalin's orders.

The Russian parliament recently issued a declaration apologizing for the Soviet war crime against Poland. A set of documents related to the issue was presented to the Polish side during Medvedev's visit.

"In our history, there were bright sides, but also difficult and dark ones. And in life, it is important to try to separate history, whatever it may be, from the present," Medvedev told a Polish weekly news magazine on Monday. "Otherwise, we will always be hostage of the past." 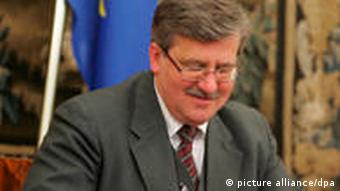 Russia admits its role in the Katyn massacre

According to observers, Moscow's willingness to finally admit to its role in the massacre following decades of disinformation and blaming the crime on the Nazis, has convinced many ordinary Polish citizens.

In spite of protests by smalls groups of demonstrators representing Poland's right wing nationalist groups, both sides went out of their way to make it a success during Medvedev's visit.

Since the death of former President Kaczynski, who had steered a confrontational course in relations with Moscow, Komorowski has decided to adopt a more pragmatic approach towards Russia.

In the past, successive Polish governments were criticized by their counterparts in the EU for being anti-Russian and blocking any attempts to build a more pragmatic relationship with Moscow, something that now definitely seems a thing of the past.

Bronislaw Komorowski, the candidate of Poland's ruling pro-business Civic Platform party, has become the country's next president. Komorowski beat Jaroslaw Kaczynski by a margin of 7 percent of the vote. (05.07.2010)

Almost two months after a plane crash that killed Polish President Lech Kaczynski and 95 others, the black-box transcripts have been released, revealing what took place in the cockpit before the plane went down. (02.06.2010)

A line of mourners nearly a kilometer long formed as Polish citizens gathered to pay their last respects to Polish President Lech Kaczynski and his wife, Maria. The couple will be buried at Wawel Castle this Sunday. (14.04.2010)

Russia's President Vladimir Putin discussed the war in Ukraine with Israel's Prime Minister Naftali Bennett after his foreign minister infuriated Israel with comments about Hitler. Follow DW for the latest.

Ukraine: Germany expels Russian diplomats with Bucha deaths in focus — as it happened 04.04.2022

The German government has declared 40 Russian diplomats unwelcome and taken temporary control of Gazprom's German subsidiary. This comes as the world digests images of civilian deaths in a Kyiv suburb.