Mass extinction could take food off the table | Environment| All topics from climate change to conservation | DW | 26.09.2017

Mass extinction could take food off the table

While there has been much recent focus on mass species extinction, a new report shows food staples like coffee and chocolate could also be under threat. But greater agricultural biodiversity can save them. 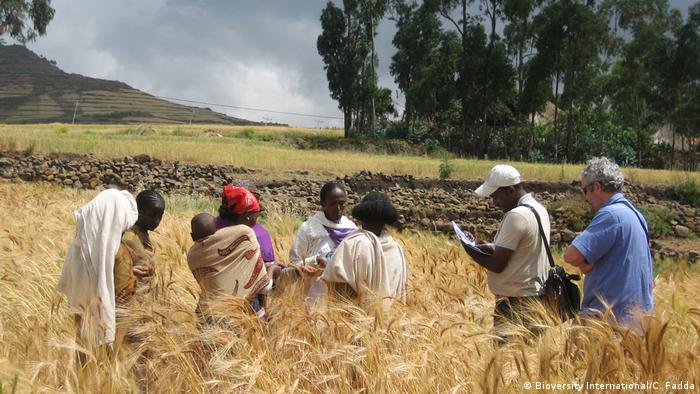 There has been much discussion of wildlife mass extinction in recent times, yet the consequences for our food have been given far less attention.

That inspired a team of researchers under the guidance of Bioversity International to draft a definitive account of the decline of our food staples - and ways to reverse it. Titled "Mainstreaming Agrobiodiversity in Sustainable Food Systems," it is a sobering reminder of the need to address threats to both animal and plant life. 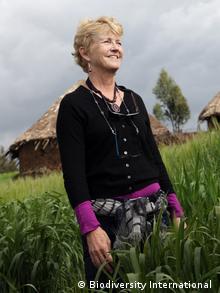 Tutwiler visits a research site for Seeds for Needs in Ethiopia

"Somehow this issue has been neglected, like organic agriculture was 20 years ago when it was seen as a niche issue," Ann Tutwiler, director general of Bioversity International and co-author of the report, told DW.

With just three crops - rice, maize and wheat - providing around 50 percent of our total food calories, any threat to these staples from climate change could be devastating.

The answer is to stop putting all our eggs in one basket and grow more different kinds of food. "Biodiversity needs to be mainstreamed into our agriculture," Tutwiler says.

In an op-ed published this week in The Guardian, Tutwiler noted that nearly 22 percent of wild potato species could be extinct by 2055 due to climate change. And cocoa trees in Ghana and Ivory Coast that supply 70 percent of the world's chocolate may not survive a 2-degree temperature rise. Tanzania's coffee crop already yields half what it did in 1960.

In response, Tutwiler is preaching agrobiodiversity as the most effective way to mitigate the effects of climate change on food production. "A wealth of traditional seed varieties have unique traits that make them tolerant to heat, drought and floods. They must be found, preserved and put to use in crop-breeding programs," she wrote.

But the Bioversity International report also makes the key point that industrial agricultural systems producing the majority of the world's food are actually driving climate change - and environmental destruction. 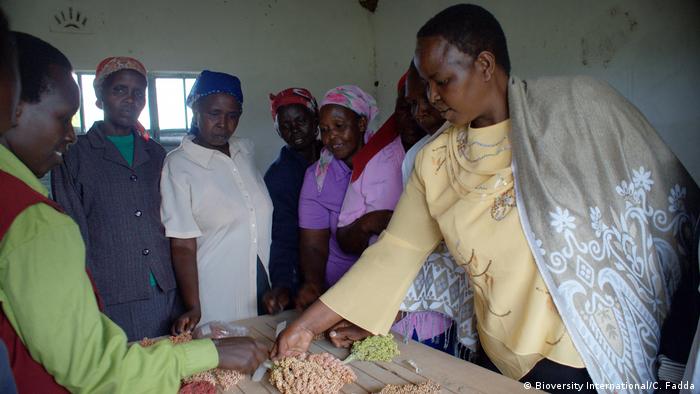 It notes that agriculture contributes around 24 percent of global greenhouse gas emissions and is the largest consumer of fresh water on the planet. As many as 62 percent, or 5,407, of the globally threatened species tallied by the International Union for Conservation of Nature are impacted by mass agriculture.

One solution to food extinction is to create demand for more diverse food crops, which is why Bioversity International encourages farmers to move away from monocultures.

"We now have demand for Ethiopian coffee, for quinoa from Bolivia and the Andes," Tutwiler told DW. "This was a crop that was totally forgotten. And partly through our own efforts it has been conserved and has an economic value."

This strategy extends to promoting general plant biodiversity, including that of pollinators that encourage bees, as well as soil diversity and crop rotation instead of chemical fertilizers.

Agrobiodiversity isn't just aimed at small farmers. Tutwiler points to rice farmers in Sacramento, California who had been burning back the land after harvesting since 1970s but were encouraged to use flooding since it would preserve the biosphere and encourage wildlife. "It did not sacrifice the yield but had a lot of biodiversity benefits," she said.

The issue of mass extinction will also come into focus during next week's Extinction and Livestock international conference, which starts on October 5 in London. The event is billed as examining how to "transform our global food and farming systems to work for people, the planet and animals." These sorghum varieties in Tanzania aim to extinction-proof food crops

Philip Lymbery, CEO of Compassion in World Farming and author of "Dead Zone: Where the Wild Things Were" is one of its organizers.

"Intensive farming causes immense harm to wildlife, people and the environment, and is one of the biggest drivers of species extinction and biodiversity loss on the planet," he told DW.

While much of the focus on species loss has been around climate change and poaching, Lymbery says industrial farming of meat, and the cereals and soy grown to feed animals, is the fundamental problem.

"Feed is grown in vast chemical-soaked monocultures," he says of land stripped of "trees and wild flowers" to grow fodder for animals. "With them go the insects and seeds that are needed for the birds, the bees and the butterflies."

Lymbery says the amount of cereal and soy fed to industrially farmed animals worldwide could feed 4 billion people, and calls the loss of biodiversity to produce meat, milk and eggs "madness on a plate."

"That's why we are hosting a conference of leading thinkers from around the world who want to find a positive way forward through a progressive fusion of farming and nature," he said.

Researchers argue in a new study that a "biological annihilation" of animal species is occurring due to global environmental problems. The scientists argue that human activity is to blame for the development. (11.07.2017)

Can even a slight temperature rise cause mass extinction?

A study suggests that even a little global warming accelerates mass extinctions, painting a grim picture for species around the world. (09.12.2016)

After quinoa, coconut water and kale, the new superfood craze is baobab, packed with vitamin C, calcium and antioxidants. But as the West falls for Africa's "tree of life," is it being overexploited? (16.06.2017)