Mariupol: Three people describe how they escaped from ′hell′ | Europe | News and current affairs from around the continent | DW | 24.03.2022

Mariupol: Three people describe how they escaped from 'hell'

The besieged city of Mariupol in southeastern Ukraine had over 400,000 inhabitants before the war. Many are still there and making do with little food and water. Those who can are leaving, but even this is dangerous. 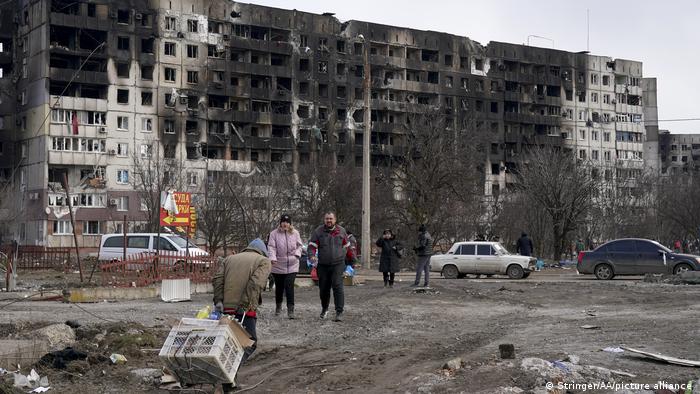 Eyewitnesses say there is hardly an intact building left in Mariupol

Since the beginning of Russia's war against Ukraine, no city has been mentioned by media outlets and politicians all over the world as much as the Ukrainian city of Mariupol. Under constant fire, the port city on the Sea of Azov has become a symbol of resistance to the Russian army and of humanitarian disaster. The destruction of a hospital treating children and pregnant women and the bombing of a theater where civilians had taken shelter shocked the world. The EU said that Russia had committed a "massive war crime."

DW spoke to people who were able to escape the city and find safety in Ukrainian-controlled territory.

'Bodies all over the city'

Mykola Osychenko, the head of Mariupol Television, left the city with his family and neighbors. They lived near the hospital that was bombed on March 9.

The clinic is 500 meters (about 550 yards) away from my building. When the plane dropped the bomb, I thought that it had hit our building because the explosion was so powerful. But it was the children's hospital with a maternity ward on the third floor. The day before the attack, my 60-year-old injured neighbor had been released from the very same hospital. He had ended up there because there was no space elsewhere. Russian media said that there were neither children nor women and that it was the headquarters of a battalion, but, in reality, there were many women and children.

The temperature in our building was the same as outside: minus 6 or 7 [degrees Celsius] (21 to 19 degrees Fahrenheit). We all slept in the basement in a separate room. That was the warmest place because it could be sealed off. There were mattresses and cushions on the ground. We put the children on them. They slept and spent all day there. The little ones lay down with their mothers, the grandparents slept while sitting on chairs against the wall. Those of us who are middle-aged simply slept on the stairs. 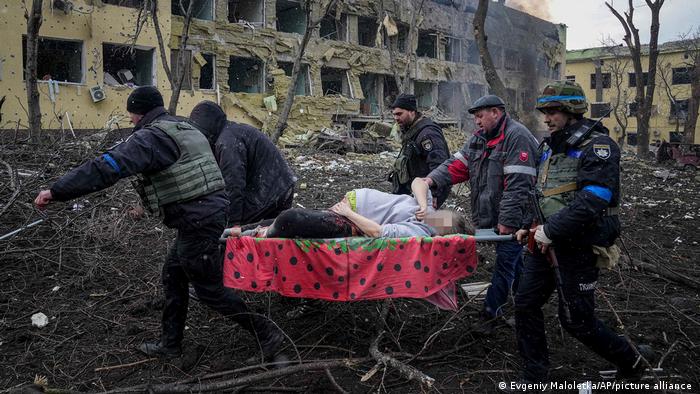 This children's hospital was damaged by shelling on March 9

Before we left Mariupol, we gave our water supplies to those who were already in cars and to people who were staying behind. We also left them the remaining food that we had because it is impossible to get any more now. The warehouses have been destroyed and plundered, the shops too.

Before we left, we were cooking food over a fire outside in front of the building, but we did not have enough dry wood. People used the window frames and building material from schools that had been bombed as firewood. But it was dangerous to collect it as a bomb could hit anytime, which also happened. People were torn to pieces. 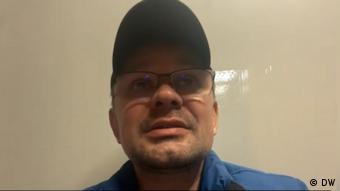 The journalist Mykola Osychenko was able to escape with his family

At the beginning, people tried to get water from the wells, which still exist in some places. But they also had to get there under fire and wait in a queue for a long time. People also used water from the heating systems of destroyed buildings even though it should not be drunk. But they boiled it and drank it. One night, it snowed. We were overjoyed like children. Everyone in our block collected it in buckets as long as it was calm, and we built up a supply of melted water.

As we were leaving the city, we did not see one intact building ­— there were shattered windows and destroyed walls between apartments everywhere. Some of the buildings had no top floor left at all. There were corpses everywhere, women, men and children. We tried to distract our children in the car so that they would not see. It is simply terrible.

'My heart is broken into three pieces'

I made my way from the left bank of the Kalmius River in Mariupol to a building in the city center with just a backpack because there was less firing at the time. My mother, who is 79, didn't want to come with me. Neither my tears nor my warnings could make her change her mind. Just an hour after I left our building, a school and two nearby buildings were hit. At our neighbors', all the windows shattered but my mother's ones did not break. Later, the electricity and water were turned off, and I told my mother that I would come and get her the next day, and this time she agreed.

My colleagues and their families were already staying in the building in the center because their homes were in dangerous parts of the city. There were 16 of us, including six children. We set up beds in the basement, with mats and air mattresses. There were frequent air raid sirens and we spent most of the day in the basement. The next day, I couldn't get to the left bank of the city. We tried for over four hours to call a taxi. The answer was: "There is no gas, nobody is going to the left bank." I begged and offered a lot of money but to no avail. None of my acquaintances were able to help me to get my mother. Then I called her. She calmed me down. She said that she had water and food and that the war wouldn't last forever. She said that she would manage. That is the last I heard of her. 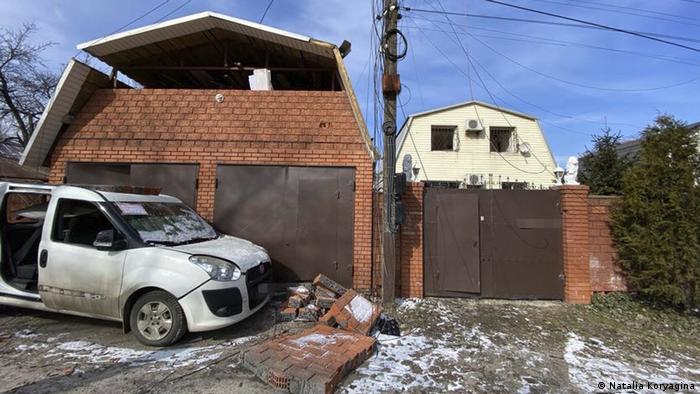 Natalya Koryagina stayed in this building before leaving Mariupol

My husband is in the army and is defending our country. The first few days, I had no contact with him. My son is in Kharkiv. My heart is broken in three pieces. But life goes on. As the siege tightened around our city, our electricity, water and gas were switched off. We could still get a certain amount of food at the market. The stores already closed a long time ago and were plundered since there was no electricity and they had come under fire. We had to cook our food in fires outside. Firewood was collected all over the district, which was under fire.

Then our building was fired at from all sides. All the windows and the roof were destroyed. The building shook so much that we thought it would collapse. But the basement held out. The temperature was 1 to 2 degrees [Celsius] on the ground floor. It was 4 to 5 degrees in the basement. But the worst was the lack of water. It snowed twice so we were able to fill two bathtubs with snow. We were lucky.

There was no cell phone reception in the building, only 900 meters away from us. We found out about a corridor for private cars and decided to leave. When we were loading our cars, there were repeated blasts and metal shards flew against the fence. We left Mariupol at 12 o'clock, we saw ruins and fires everywhere. We arrived in Berdyansk at about 9 p.m. and spent the night in a school. There were children in many of the cars of the convoy. Everybody was driving carefully because there was unexploded ordnance everywhere. There were Russian checkpoints on all the roads going in and out of towns, over 30 of them. There was a huge traffic jam in front of a bridge that had been blown up near Zaporizhzhia. The detour was via a narrow road. We were able to get through, but an hour later another convoy was fired at and there were casualties. We arrived in the city of Dnipro at around 7 p.m.

'It is simply hell'

Oleksandr Skorobohatko, who works for an international humanitarian organization, left Mariupol on March 15.

By the beginning of March, it was clear that the whole city was facing a humanitarian catastrophe. When there was no more food and medicine coming in, people started to panic. I had only heard about humanitarian disasters in theory before. I have never worked for a foreign mission and had never been confronted with such problems.

My sister and I stayed with relatives. We slept on the floor in the hallway where we felt safer. Somehow, we adjusted to the shelling, to the lack of food. The neighboring building had already been destroyed. We spent a lot of time with the neighbors and lit fires to cook.

It took a long time for the humanitarian corridor to be set up. People did not have much hope and convinced each other that it was safer to stay in the city. When we heard on the radio that 500 cars had already reached Zaporizhzhia, we could not believe it at first. But the next day, an acquaintance came and told us there would be another convoy of cars. We immediately got into the car. We intuitively took side streets. By the time we were five or 10 kilometers [eight to 16 miles] away from the city, it finally got quiet. 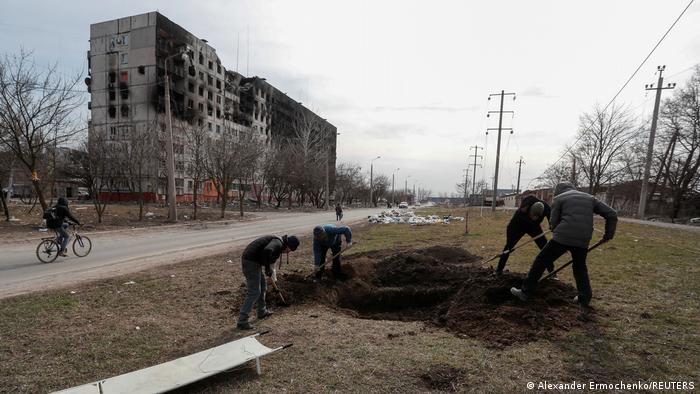 There were checkpoints, controls, endless queues everywhere. Only when we arrived in Zaporizhzhia did we realize that we had finally managed to leave Mariupol. I kind of felt guilty for not warning friends and family with their children in advance. So, I decided to go and get them.

We went through all the checkpoints again. At the last one before Mariupol, the soldiers of the so-called "People's Republic of Donetsk" just took the car from me. I had to come back on foot. I was able to sleep and eat in the next village. In the morning, some good people brought me with them to Zaporizhzhia. I will remember this all my life, as well as all the dead.

Many volunteers are managing to get to Mariupol at the moment. We exchange information. But nobody can guarantee anyone's safety, on the contrary, there are warnings that one might not come back alive. Nonetheless, I'm still looking for ways to get my relatives at least to the next safe village.

It is simply hell.

Is hatred of Russians on the rise in Ukraine?

Ever more Russian soldiers are refusing to fight Putin's war. Human rights activists report many "refuseniks" are being jailed in Russian-controlled areas of Ukraine where they are subjected to violence and abuse.