He arrived in the Bundesliga with a growing reputation and a famous name but Marcus Thuram is determined to find his own path. He told DW about his family, his development and his hopes for Borussia Mönchengladbach. 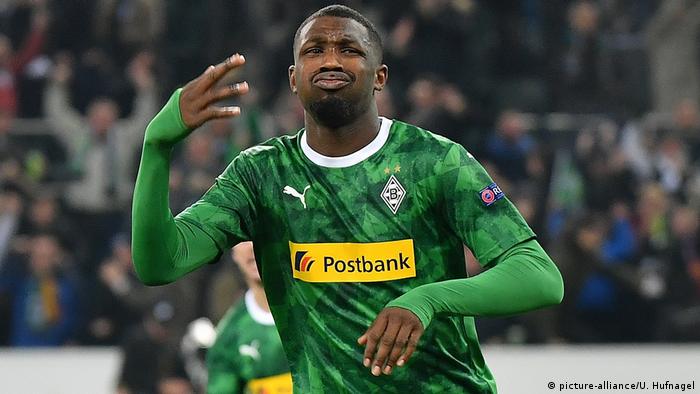 Following in the footsteps of a famous parent can be a blessing and a burden. But since arriving in the Bundesliga at the start of the season, Marcus Thuram has started to carve out a name for himself as more than just the son of French World Cup winner Lilian Thuram.

After a few games of adjustment, the 22-year-old, signed from Guingamp for €9 million, exploded in to life, racking up six goals and five assists in a nine game run from late September to early December that even saw Gladbach top the table at one point.

"I  didn’t expect anything. I just came to Borussia and tried to play some good games, so the team could win as many games as possible and here we are today, in the position we are, and I hope we will try to continue playing like this," Thuram told DW’s Kick Off!

With the season suspended until at least the end of this month, that position is fourth, with the Foals six points behind leaders Bayern Munich in one of the most competitive Bundesliga campaigns in recent memory.

Though his exceptional dribbling ability and awareness have meant he’s remained a fixture in Marco Rose’s side, the goals have dried up since that purple patch, with Thuram having failed to find the net since December 1. But he said that won’t dent his belief.

"You know, there will always be doubters. I think if you’re a human being, people will doubt you and it’s good, you continue working and prove them wrong. I’m not getting into a battle with that, I’m just concentrating on what I like to do, playing football, and that’s it."

What he likes to do is also what he’s best at. Philippe Bretau, who coached Thuram as a boy at France’s much-admired Clairefontaine national training center, told Kick Off! that the game came naturally for the Italian-born youngster.

"Marcus could do things that only big guys could do, unlike other boys his age, " he said. "Normally dribbling is something the smaller players can do better. They are often good at carrying the ball and moving the game forward. But Marcus could do it even though he was tall. That was an advantage."

Standing at 1 meter 92 centimeters, Thuram possesses the physical attributes to be a defender, like his dad, who is the most-capped French player of all time. But his skills demanded he play further forward. For some, the paternal shadow may have been difficult to escape, but Marcus sees it differently.

"I saw my dad as my dad, not as the soccer player. That’s you and others who see Lilian Thuram, but I see my dad."

But the Thuram dynasty doesn’t end at Marcus, with his younger brother Khephren, 19, close to making a breakthrough at Nice, having represented France at under-16, 17 and 18 levels. "He’s a midfielder," explained Marcus. "Very calm, very technical. He’s a very good player."

Bretau says the family are well set up for success. "The relationship between Lilian and his sons is very strong. It’s a close family, they have many values. This way the boys can flourish and develop themselves without pressure but with certain demands. Also because the parents want to protect their children and know what professional football means. " 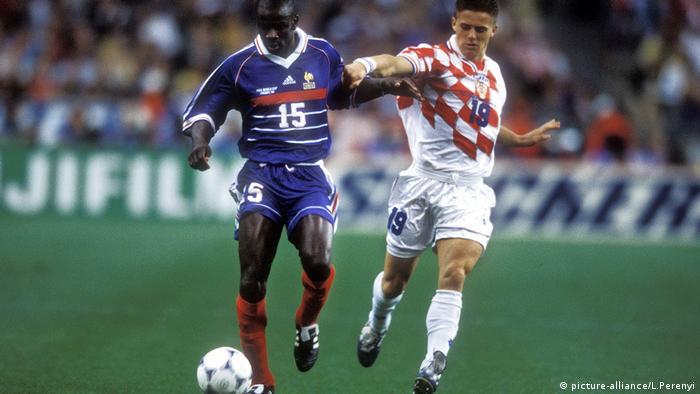 Lilian Thuram pictured in the semifinal of World Cup 98, he scored both France's goals

Marcus Thuram has certainly developed significantly in his time in Germany and those that know him best say there’s still plenty of room for improvement. Another of his youth coaches, Eric Hely, who coached him in the youth and reserve teams of French club Sochaux said his former charge is destined for the very top.

"Even though I have a lot of respect for Gladbach, that is just a phase. I hope he ends up playing for one of Europe’s top clubs," he said.

With the help of Marcus Thuram, Gladbach will be hoping they are at least competing at that level in the Champions League next season.

How I became Marcus Thuram