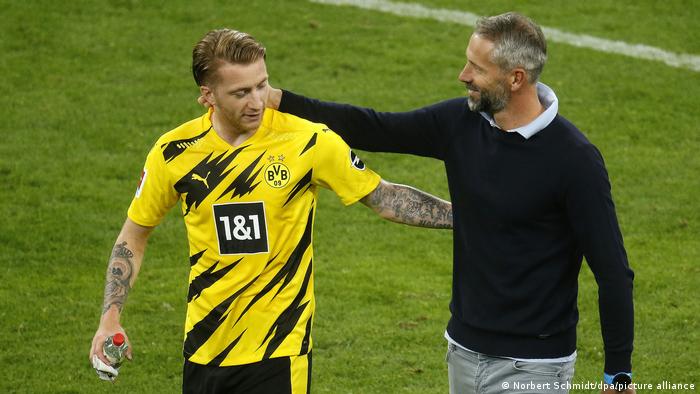 Marco Rose enjoys the big games. The slow revolution that is happening at Borussia-Park under his watch has been punctuated by high voltage home performances against Real Madrid, Shakhtar Donetsk and RB Leipzig this season.

Their next big test comes in the shape of Bayern Munich under the Friday night lights in Mönchengladbach. The champions are looking as imperious as ever at the top of the Bundesliga and, with second place RB Leipzig hosting Borussia Dortmund on Saturday, the league is looking to Gladbach to stop Bayern from running away with it again.

However, Rose goes into the game under an even brighter spotlight than usual. Rumours have begun to circulate that Borussia Dortmund might be able to prise the Red Bull graduate away from Gladbach and appoint him as their new head coach in the summer.

Both Borussias are remaining tight-lipped on the rumours. Dortmund's sporting director Michael Zorc said on Sunday that "we have very important games in January. That is our focus. It commands my respect for Borussia Mönchengladbach and also for other clubs not to say another word about it."

Zorc's Gladbach counterpart, Max Eberl, didn't give a centimeter either, telling German television broadcaster that Rose "is at the right club at the moment and that's how it should stay for a long time."

What Eberl wants and what he gets may not be the same thing though, with Dortmund having apparently identified Rose as their number one target to replace Lucien Favre following the Edin Terzic's period as Dortmund's interim coach, which looks set to run until the end of the season.

Rose's immediate concern, however, is how to keep Bayern Munich, and specifically Robert Lewandowski, at bay. The FIFA Best player of the year has already scored 19 league goals this season in just 14 games and is on course to break Gerd Müller's all-time record of 40 league goals in a season.

When asked whether he has a specific plan for nullifying Lewandowski, Rose compared the Bayern number nine to Real Madrid's Karim Benzema, and said his team won't change just to keep the Pole quiet.

"I was asked in the press conference before the Real Madrid game whether we can defend against Karim Benzema and I succinctly said yes, you can. Then he scored twice against us," Rose told DW in a virtual press conference on Wednesday.

"He only had a couple of chances but world class strikers will always find space no matter what you do. They will always look for opportunities and use them, so you just need a great day.

"One-on-one, you have to orientate yourself well and know where he is, but we mustn't lose sight of our own game," the 44-year-old coach said. "It doesn't make sense to focus only on one striker. We know who is coming and we have good center-backs to stop him. We also have good defensive midfielders who have the task to face up to the danger and help defend against Lewandowski as best as we can."

After a dramatically shortened winter break, the Bundesliga returns this weekend. It's tight at the top, but is there actually any hope for Bayern Munich's challengers? Will we see fans again? And will Schalke ever win?

All Lewandowski goals this season