Mapping air pollution to conquer it in Mongolia′s capital | Environment | All topics from climate change to conservation | DW | 25.01.2017

Mapping air pollution to conquer it in Mongolia's capital

Climate change has forced many Mongolian herders to abandon their nomadic ways and resettle in the country's capital. This brings environmental challenges for Ulaanbaatar - which one group is combating through mapping. 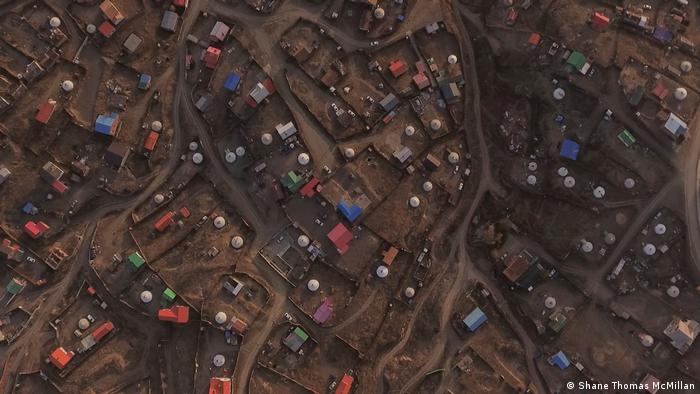 "It's not like an entertainment or tourism tour," our guide Tuguldur Chuluunbaatar says. "It's more like giving people more realistic information about Ulaanbaatar, especially ger area."

Gers, or yurts, are the traditional circular tent homes used throughout Mongolia. In recent years, desertification and harsh winters called "dzuds" in Mongolian have forced thousands of rural Mongolians to pack up their gers and head to Ulaanbaatar in search of work.

But the steady influx of people has caused serious environmental problems for the city. Since new urban residents burn coal to heat their yurts, the air quality in Ulaanbaatar has gotten worse than Beijing or Mumbai.

In 2016, a nongovernmental organization called the Ger Community Mapping Center started working to get a handle on these problems - through mapping. 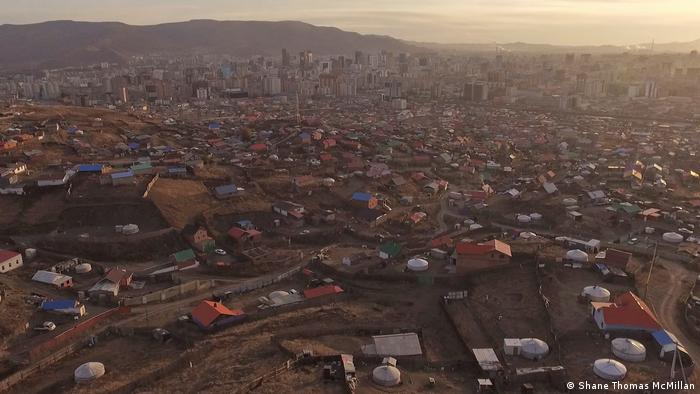 Under a grey dome

At the top of Dari Ekh hill, the scale of the ger district sprawl is staggering. A patchwork of white canvas gers, dirt roads and makeshift fences blankets the hills to the north and east of the city. And it's growing daily.

Mongolia's advisor to the Ministry of the Environment, Batjargal Zamba, says many of Ulaanbaatar's environmental problems have to do with infrastructure that hasn't kept pace with the exploding population growth.

"This city was designed for half a million people," Zamba says. But today, Ulaanbaatar has 1.2 to 1.3 million residents.

More than 200,000 households make up the ger district - mostly people who've relocated to the city from the countryside.

Recent data from the World Health Organization ranks air pollution in Ulaanbaatar as worse than Beijing and Mumbai. From 2009 to 2013, carbon dioxide emissions in Mongolia nearly tripled. And residents see it all around them, especially in winter.

"When you are in the mountain or in a high place," Chuluunbaatar says, "there is like this dome over the city, this grey dome. Like a bowl upside down." 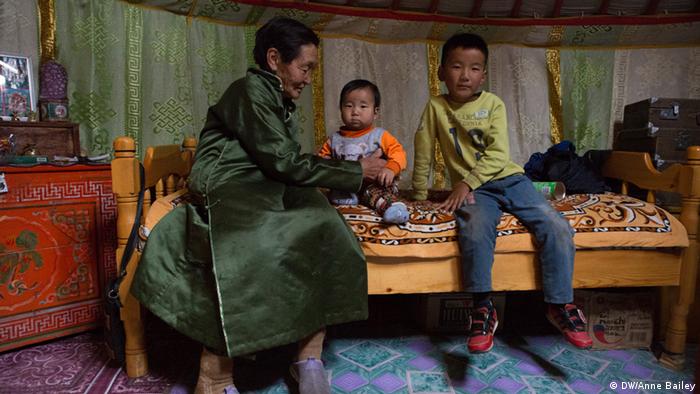 Recent immigrants to Ulaanbaatar carry on living in yurts

From the steppe to the city

Jargalsaikhan Erdene-Bayar lives with his wife, grandmother and three children in the heart of the ger district. After losing most of his livestock in a dzud, he quit herding and moved his family to Ulaanbaatar to find work. He wasn't alone.

"During that time, so many nomadic families lost their livelihood. Thousands of livestock were killed. Because of that, they started moving. And it's still happening."

Scientists say the increasing frequency of dzuds is at least in part due to climate change. Mongolia has seen a temperature rise of twice the global average. Together with factors such overgrazing, this has resulted in 70 percent of the country's grasslands being impacted by desertification. 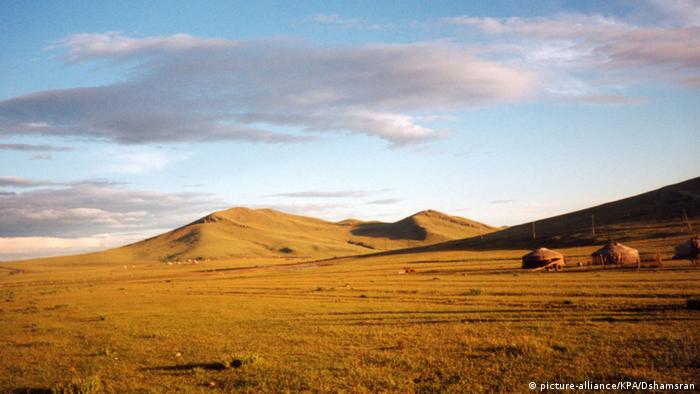 Desertification is increasing in Mongolia, due to overgrazing and climate change

Erdene-Bayar makes decent money working construction most of the year. But come winter, he's forced to work as a security guard, earning just $140 (130 euros) a month. That's when he turns to burning coal to keep his family warm - 3 tons of it each winter.

Erdene-Bayar knows it's dangerous to his family's health to burn coal. But he doesn't see another way. Mongolia has no natural gas reserves, and electricity is expensive.

The stoves ger district families like his use are meant to burn wood and animal dung, not coal. Since the coal isn't fully combusted, it releases more particulates into the air.

Erdene-Bayar says for conditions to improve, the government needs to move people like him into better housing connected to the city's central heating system.

Ulaanbaatar did approve a master plan in 2013 to replace many gers with high-rise apartments for thousands of families. But progress has been slow, and many residents aren't willing to give up their traditional gers for walls of concrete and steel. The only source of heat in the yurt - a small stove

A community in action

Chuluunbaatar and Gongor of the mapping initiative say they're starting to see positive changes coming from their efforts.

This year, they're mapping both the air pollution exposure of children during their commute to and from schools, as well as the overall air quality for the year in the city.

Chuluunbaatar thinks that by educating ger district residents about what's happening in their communities, more change will come.

"It's really hard to make the government or state do something when you're alone - but [through] the community, the voice is very strong."

One ger subdistrict stands out in Ulaanbaatar. Green Lake once had the city's highest crime rate and worst access to clean water and education. Four years ago, local resident Ulziitogtoh Sodnomsente used his own money to transform the place.

Now, he's collaborating with the Ger Community Mapping Center to add a small library and café to his park. Batdorj Gongor shows a map of waste sites in Ulaanbaatar

"My main goal is to inspire young people to improve their living conditions and environment," Sodnomsente says.

And that's what the Ger Community Mapping Center is all about, Gongor says.

"Ulaanbaatar is our city," he says. "And to improve and develop it into a self-sufficient and eco-friendly city, every citizen needs to participate."

Agricultural scientist Tony Rinaudo battles desertification in Tanzania by reviving the stumps of trees felled to create agricultural land. His methods are helping slow the advance of desert sands. (19.12.2016)

Volunteers are fighting to save some of Europe's last virgin forest by painstakingly mapping areas under government protection. But they say a change of mentality is needed if the EU is to set an international example. (28.10.2016)