Many Turkish-German hearts beat for Erdogan | Germany | News and in-depth reporting from Berlin and beyond | DW | 23.05.2014

Many Germans criticize Turkish Prime Minister Recep Tayyip Erdogan ahead of his visit to Cologne. But his supporters in the city are ready to cheer on the man they regard as a national hero. It's still quiet at 9:30 in the morning on Cologne's Keupstrasse. The smell of freshly baked flatbread wafts from a bakery. Most of the people in the neighborhood have Turkish roots. A man with a trim black moustache sweeps the sidewalk in front of his shop. Arif Yucatas sits in a cafe across from his shop for ladies' fashions, waiting, letting his prayer beads glide through his fingers, taking small sips of hot black tea from the small glass set on the table next to him. It's too early for customers.

Yucatas was born in Turkey. He came to Germany when he was eight years old, and now, he said, he's "almost" integrated. He proudly announces that he will be present when Turkish Prime Minister Recep Tayyip Erdogan takes center-stage on Saturday in Cologne. "It's going to be a great appearance," the 43-year-old said. "I think he's a popular hero." 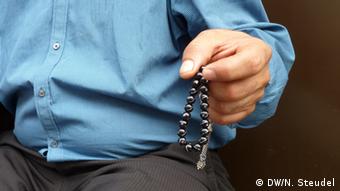 Like many Erdogan supporters, Arif Yucatas attributed Turkey's economic upswing to the Turkish prime minister. "In the past, our prime ministers were treated like dirt, but that has changed with Erdogan," he said.

He dismissed criticism of Erdogan's behavior in the wake of the tragic Soma mine accident that left more than 300 people dead, blaming "skewed media reports." The accident was part of a conspiracy against Erdogan, the shop owner said, adding that his opponents want to get rid of him before Erdogan decides to run for the presidency in August.

Ibrahim Serper nodded in agreement. The 45-year-old plumber sits next to Arif Yucatas. Serper was also born in Turkey, and has lived in Germany for 32 years. He, too, has nothing but praise for the Turkish leader. With Erdogan in office, Turkey has highways instead of gravel roads, he said, adding, "Why should I be against him?" As soon as his two eldest daughters are married, Serper plans to move back to Turkey. 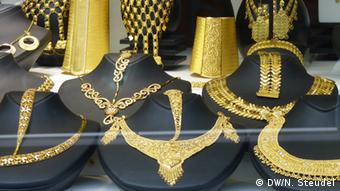 Some Turkish jewelry stores are on Cologne's Keupstrasse

When more than 800,000 Turks came to Germany as migrant workers in the early 1960s, the plan was to return to Turkey. But many stayed, worked hard, married and had children. Today, their grandchildren and even great-grandchildren live in Germany, and Cologne's Keupstrasse is an example for the microcosm that grew from what many German's at the time thought was an interim solution to a labor shortage problem decades ago.

On a length of 800 meters, the street appears perfectly Turkish. Hairdressers advertise as "Kuaför" on shop windows, and restaurants with huge upright kebab spits nestle alongside countless jewelry stores with oriental-style jewelry.

Ten years ago, a bomb attack rocked the neighborhood and 22 people were injured, and many Turks in Germany lost their trust in the state. Initially, authorities dismissed the possibility of the bombing being a xenophobic crime, but in 2011 it turned out the far-right National Socialist Underground (NSU) was to blame for the attack. Keupstrasse residents haven't forgotten that no one believed them at the time, and that authorities even suspected an argument between Turkish businessmen as a possible reason for the bombing. 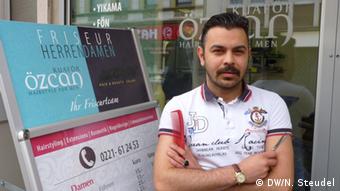 Yilmaz Toprak thinks Erdogan is the right choice for Turkey

Yilmaz Toprak, who works at the hair salon that was completely demolished by the bomb blast in 2004, is reluctant to speak about the incident. Too many reporters wielding microphones roamed the street after the attack, the 27-year-old said. Now the reporters are back, and this time they're asking questions about Erdogan.

Toprak is defiant. "I feel more like a Turk," he said. He was born in Germany, but he chose Turkish citizenship. He is convinced of Erdogan's qualities as a leader. "With him in power, we have fewer debts and it's easier to get loans," Toprak said, adding that there is absolutely no alternative to Erdogan.

Few people were inclined to criticize Erdogan. Within a few years, he turned Turkey into an affluent country and imparted a new significance to Islam. Whereas his predecessors had prohibited the wearing of headscarves for women at schools and universities, Erdogan reintroduced the tradition. His wife, who also wears a headscarf, serves as a model for many Turkish women. 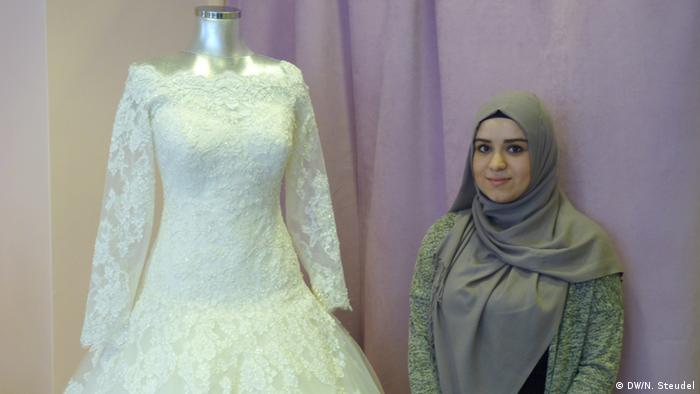 A few months ago, Esma Simsek started to cover her hair in the public - another reason why she speaks out in favor of Erdogan. "Everybody should have the right to decide for themselves how to dress," she said. A Turkish citizen, the 21-year-old Simsek was born in Germany and works in a store selling wedding gowns. In her view, Erdogan improved many aspects of life in Turkey but still suffers from a negative image.

Simsek said it's legitimate for him to try to gain politically during his appearance in a well-known Cologne venue. "The Turkish election campaign takes place in Germany, too," Simsek said.

Haydar Erdogdu, however, had only harsh words for Erdogan. He said Erdogan was fully responsible for the disastrous Soma mine accident that killed 301 people. Erdogdu was particularly outraged about the way Erdogan tried to deny his responsibility.

"Humanity has been lost," said the electronics salesman who has lived in Germany for 34 years, and has acquired German citizenship. 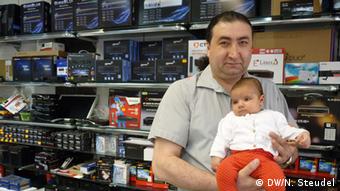 Erdogdu said Erdogan was responsible for the Soma mine disaster

"Erdogan's visit may be important to a Turkish economist, but not for me," Erdogdu said.

He criticized Erdogan for dividing the Turkish people and said that the prime minister's divisive policies could even lead to a civil war.

A few buildings further down the street, Sancak Topal is in charge of a translation office. He said he hopes Erdogan will stay in power for a long time to come. After all, Topal said, he does not want to return to an impoverished country. Although living in Germany since 47 years, he still feels like a guest worker, and wants to return to Turkey soon. But on a conciliatory note he added, "My heart beats for Turkey, but one half for Germany, too."

The controversial visit to Cologne by Turkish Prime Minister Recep Tayyip Erdogan was organized by the Union of European Turkish Democrats . The UETD is only one of Erdogan's lobby groups. (21.05.2014)