Protesters clashed with police after a day of anti-Islam action in the Swedish city. Earlier, right-wing extremists had burned a copy of the Quran and a Danish politician was barred from entering the country. Violence broke in the Swedish town of Malmo in the late hours of Friday, after about 300 protesters gathered to protest anti-Islam activities.

Demonstrators threw stones at the police and burned tires during the clashes, which began after anti-Muslim Danish leader was blocked from attending a Quran burning rally. Rasmus Paludan, leader of the Danish anti-immigration party Hard Line, has been banned from Sweden for two years.

The event in Malmo which he was scheduled to attend, was being held on the same day as weekly prayers for Muslims.

Swedish newspaper Daily Aftonbladet reported that several anti-Islamic activities took place earlier on Friday. Three men were found kicking a copy of the Quran among themselves at a public square. The anti-Islam protests occurred after Paludan was denied permission to hold a meeting in Malmo. 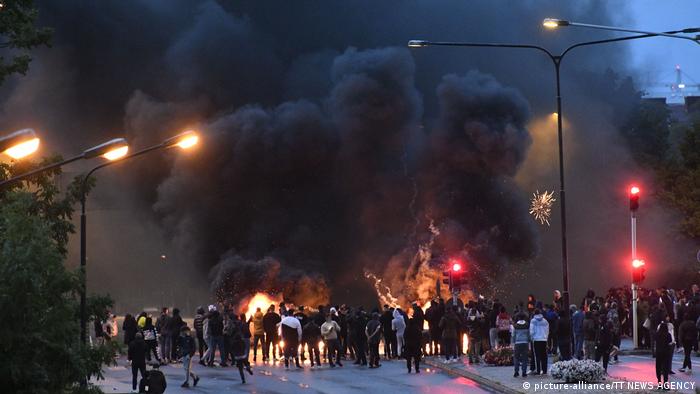 Demonstrations escalated in the same location where the Quran had been burned. "We don't have this under control but we are working actively to take control," said a police spokesperson.

Paludan put up an angry message on Facebook, according to agency reports. "Sent back and banned from Sweden for two years. However, rapists and murderers are always welcome!"

Last year, he had burnt a copy of the Quran wrapped in bacon — meat which is taboo in Islam.

Until now most Swedes have backed their country's approach to the coronavirus pandemic. But as the death toll has catapulted Sweden into the ranks of the worst-hit countries, people are beginning to balk.