Sweden starts to doubt its outlier coronavirus strategy | Europe | News and current affairs from around the continent | DW | 05.06.2020

Until now most Swedes have backed their country's approach to the coronavirus pandemic. But as the death toll has catapulted Sweden into the ranks of the worst-hit countries, people are beginning to balk. 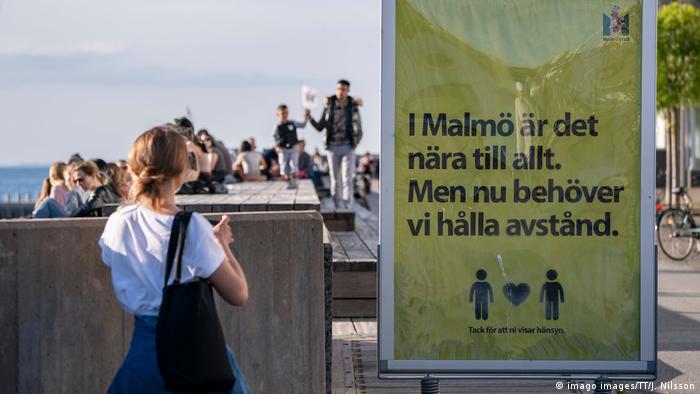 At Malmo's city beach the grassy dunes, sands and promenade are crowded with groups walking, barbecuing, and otherwise enjoying the late afternoon sun.

Few here seem aware that Sweden has throughout the day dominated the global media's COVID-19 coverage, after its state epidemiologist Anders Tegnell for the first time conceded that the countrymight have benefited from some tougher restrictions.

And if they are aware that the country's per capita death toll from the virus has just passed that of France, bringing it firmly into the group of worst-hit countries, they are not showing it.

"I wouldn't say that it has taken over the whole society. People are still living their lives," says Kristina Hakansson, as she unchains her bike to head home. "I think it's a very good thing that we in Sweden — instead of just jumping to conclusions — we try to, you know, actually base our actions on research."

"I think it's good," says Karin, a pensioner enjoying an ice cream with her husband who didn't want to give her surname. "I like the way that it's up to the people, to us, to behave in a sensible way." 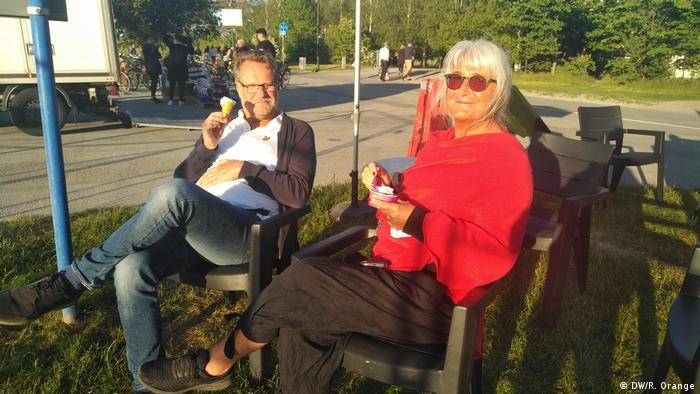 Karin is satisfied with the way Sweden has dealt with coronavirus

But there are doubters too.

"Personally, I don't think it was right. It's too free here, even for the old people," says Mike Gozi.

"If you look at the statistics, we have failed," agrees Bengt Kristoffersen, who has been out on the Kallbadhuset pier.

But even they admit that as younger people in Sweden have largely been able to live life as normal, there is little of the public anger present in other countries.

"We haven't had a lockdown; they are frustrated and they are outraged because they want to get out," Kristoffersen explains. "In Malmo, life is more or less normal," says Gozi.

Sweden's government is perhaps alone in the world in delegating the country's coronavirus response almost completely to its public health agency.

And while state epidemiologist Anders Tegnell has become a polarizing figure internationally as he explains Sweden's approach in interview after interview, at home he exudes calm and dependability. 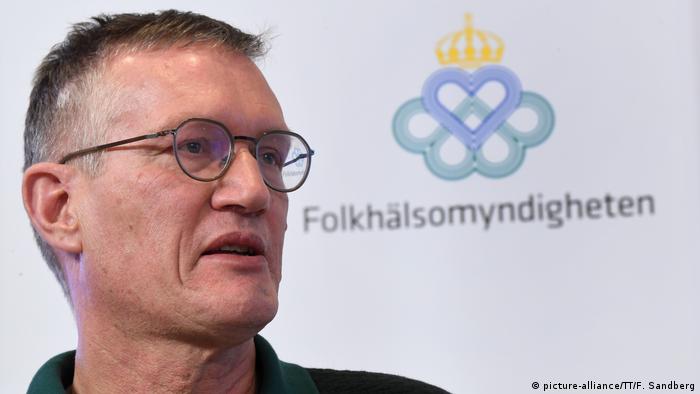 Anders Tegnell has become a familiar, trusted figure for many in Sweden

Every working day, for 60 days now, he or one of his deputies has held a press conference at 2 p.m. at the offices of the Public Health Agency. There they run through the same charts of new cases, deaths and hospital numbers, in front of the same background, in front of many of the same journalists.

Over the course of the crisis, Tegnell, who has a gift for a well-turned phrase lacking in his counterparts in other countries, has enjoyed enormous support in Sweden. Public trust in the agency rose from 75% when the crisis hit at the end of March to as high as 82% at the start of May, according to the pollsters Kantor Sifo.

It is only in the last few weeks, as Sweden's per capita death toll has risen to more than 10 times that of Norway and 4.5 times that of Denmark, that support dropped, hitting 70% in the most recent survey.

"It's quite obvious that at the beginning of the pandemic we had a rally-around-the-flag effect, and that was also seen in the media," says Bengt Johansson, professor of media and communication at Gothenburg University. "There was some criticism of course, but those voices weren't heard, and most media supported the strategy." 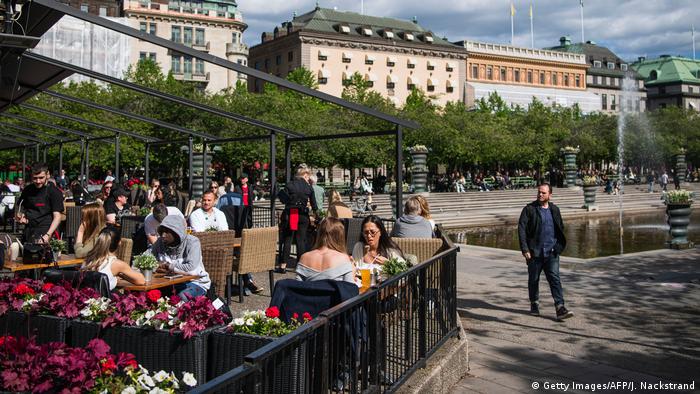 Sweden did not institute a lockdown

When 22 researchers wrote an opinion piece in Dagens Nyheter newspaper in mid-April calling on the government to seize control and make "radical and rapid" changes, all Tegnell had to do was raise a small, insignificant quibble with their figures to have their arguments roundly condemned by media commentators.

But in the past few weeks, as Sweden's death rate has risen to 10 times that of Norway and nearly five times that of neighboring Denmark, the media has become more critical.

"This picture has turned a bit because of the still quite high death rate, so we have more critical voices nowadays," Johansson says.

Over the weekend, Anna Dahlberg, political editor of Expressen newspaper, published an article accusing her fellow Swedes of believing their country was somehow more sensible, balanced and rational than other, more impulsive nations, with their unnecessary lockdown restrictions. "Sweden was seen as a little smarter than other all the other countries," she complained.

Peter Wolodarski, editor of Dagens Nyheter newspaper called on Sweden's health professionals to stop lecturing the rest of the world, calling for "reflection and humility," "not more overblown statements on how the rest of the world doesn't understand how good Sweden is." 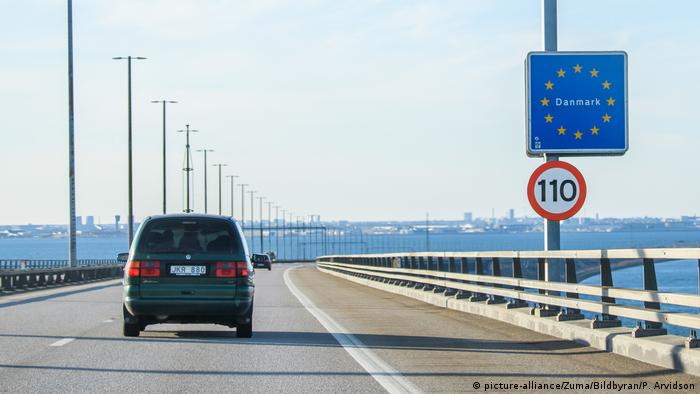 Denmark closed its border to Sweden to prevent the virus spreading

As if bending to this new public mood, Tegnell on Wednesday morning for the first time suggested in an interview broadcast on Swedish radio, that Sweden's strategy from late March perhaps should have been closer to that of other European countries.

"If we were hit by the same disease, knowing exactly what we know today, I think we would end up doing something between what Sweden has done and what the rest of the world has done," he said.

He later backtracked, saying he still believed Sweden's strategy was right, and did not believe more thoroughgoing lockdown restrictions would have helped.

Calls for Tegnell to go

On Thursday, the media climate became tougher still, with Hugo Lagercrantz, emeritus professor at the Karolinska medical university, going as far as calling for Tegnell to be fired and replaced in an article in Expressen.

So far, there is little sign that this will happen, with the political fallout for Sweden's government still limited in comparison to the level of anger in the UK.

"It's still not that politicized," Johansson explains. "The opposition parties are criticizing to a certain extent, but not the strategy as such."

Also, as the opposition parties also backed Tegnell's approach in March and April, it is difficult for them to now suddenly blame the government for also doing so.

"It's kind of hard for them to say: 'We supported the strategy, from what we knew but now we know more about this, Sweden shouldn't have done it,'" Johansson says.

In addition, healthcare and elderly care in Sweden are largely the responsibility of regional and municipal governments in Sweden, many of which are controlled by opposition parties. "There is an argument that we have weak responsibility or accountability mechanisms in Sweden," Johansson adds. 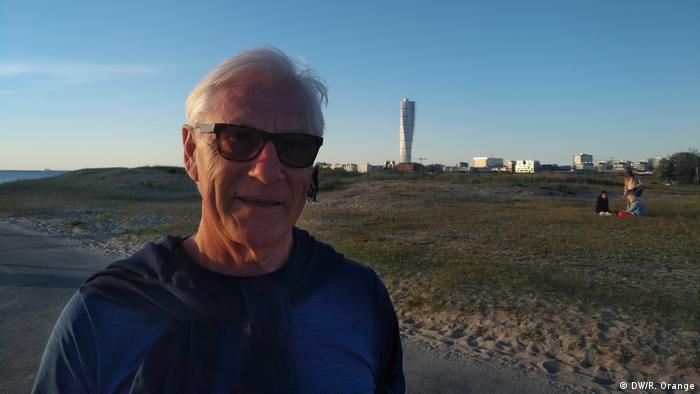 Bengt Kristoffersen concedes that people consider Swedes to be cold

Back on Malmo's Ribersborg beach, these arguments about blame and accountability seem far away.

Bengt Kristoffersen suspects people in Sweden may, in the end, start to feel the crisis had not been not handled ideally. "If we look back retrospectively, maybe we will think we should have done something else instead," he says.

But he does not expect this to have a big impact on the public mood. "Things could have been better, but they could have been worse as well. We are ice cold people here in Sweden, many believe."

Germany and Denmark: The return of the border

If you have a partner in Denmark, you might be allowed to visit them — but only if you show evidence of your relationship to the Danish police. The rule applies to travelers from Germany and the Scandinavian countries. (25.05.2020)