Almost two decades after he was jailed on disputed sodomy charges, Anwar Ibraham has won a new parliamentary seat. Now aged 71, he is expected to succeed Prime Minister Mahathir Mohammad in two years. 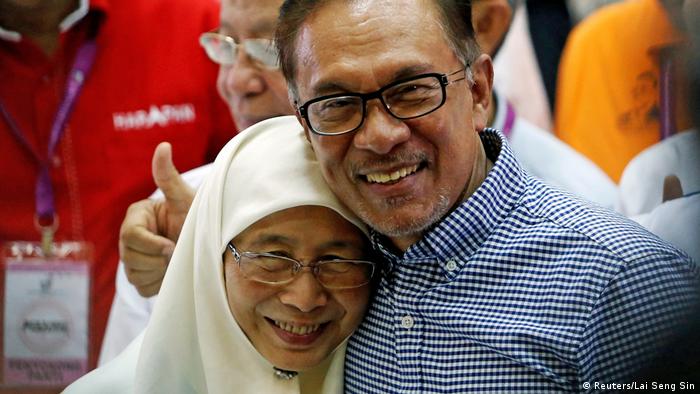 Malaysia's former deputy Prime Minister Anwar Ibrahim is to be sworn in as an MP again next week, after winning a by-election for the coastal town of Port Dickson.

"This to my mind is an important milestone, a vote of confidence for the government, the reform agenda, and the prime minister personally," the 71-year-old said of the result.

The huge margin of victory solidifies Anwar's official return to Malaysian politics after a two-decades-long scandal left his reputation in tatters.

Anwar will now be able to fulfill a deal between himself and current Prime Minister Mahathir Mohammad, the world's oldest serving leader at 93, who has agreed to eventually hand over the top job.

A former senior aide to Mahathir during his first reign as premier from 1981 to 2003, the pair became embroiled in a bitter feud that saw Anwar sacked and jailed twice for homosexual sodomy and corruption — charges he alleges were politically motivated.

Almost two decades later, angered by a massive corruption scandal at a state investment fund, Mahathir and Anwar put aside their differences and forged a political alliance that saw their Pakatan Harapan (Alliance of Hope) win the May 9 national election.

Another of Mahathir's former proteges, Najib Razak, was unseated, ending the 61-year rule of the Barisan Nasional coalition.

First jailed between 1999 and 2004, Anwar was again convicted for sodomy in 2014, as he made his first attempt at a political comeback.

That meant he was banned from participating in the May poll until his royal pardon and subsequent release from jail days after the election.

Mahathir, now in his second stint as prime minister, has since publicly declared that he will step down in two years and make way for Anwar to become the country's eighth prime minister.

After visiting Beijing, Malaysia's PM Mahathir has canceled a number of Chinese infrastructure projects, saying his debt-ridden country cannot afford them at this moment. Will the move sour Malaysia's ties with China? (21.08.2018)

The Malaysian government has agreed to amend the law to abolish capital punishment and halt all pending executions. Human rights groups have hailed the decision. (11.10.2018)