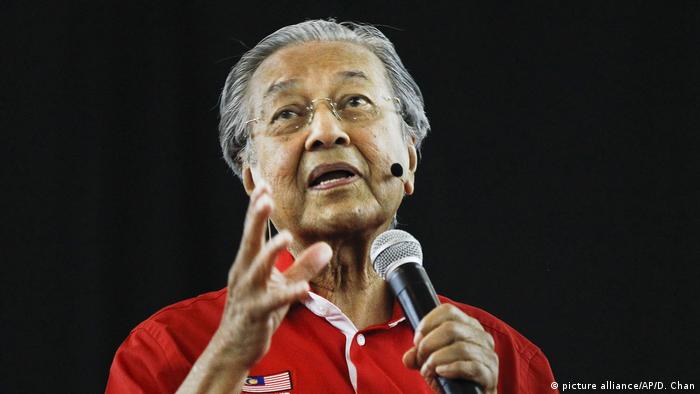 Mahathir Mohamad gestures during a speech in 2017

The tense parliamentary vote turned into a showdown between the current Prime Minister Najib Razak, plagued by the massive 1MBD corruption scandal, and his one-time mentor and former Malaysian strongman Mahathir. According to an election commission official, Najib's BN took only 76 seats.

"We are not seeking revenge, we want to restore the rule of law," Mahathir told reporters.

Ahead of the official results on Wednesday, Mahathir declared victory for his Pakatan Harapan coalition and accused the election commission of "holding back the result."

Mahathir also accused the electoral officials of refusing to sign the forms at polling stations.

"By now we should know who is winning and who is losing, but there is a deliberate attempt to delay by not signing the forms," he said before the final results were published.

On Wednesday, Malaysia took to the polls to vote in a general election that pitted the former authoritarian leader Mahathir against Najib, who is accused of corruption and suppression of dissent.

As the polls closed at 5 pm local time, the opposition slammed the electoral commission for not allowing those voters waiting in line to cast their ballots. Also, expat Malaysians had been required to return ballots before a deadline  that was brought forward.

Read more: Politicians, party or policies: how will Malaysians pick?

About 15 million Malaysians are eligible to vote in the 2018 election. Even five hours after the vote, the election commission did not publish the final turnout figures.

Promises for young, against corruption

Although there a number of political parties in Malaysia, the prime minister's Barisan Nasional (BN) coalition has essentially ruled the country since independence from the British in 1957.

Najib has promised income tax exemptions for young people and public holidays if his coalition is successful, while 92-year-old Mahathir echoed the themes of a campaign that asserted a vote for the opposition would save Malaysia from a corrupt elite.

In Malaysia, Mahathir is known as the country's "Father of Modernization," as he is credited with transforming Malaysia into an industrial nation. But his tough stance on dissidents and the press have seen critics call him a "dictator."

On Wednesday, Mahathir said a prime minister, widely expected to be him, would be sworn within a day.

Thousands in Malaysia take part in rally against prime minister

Thousands of protesters have rallied in Malaysia's capital seeking the premier's resignation over a financial scandal. Prime Minister Najib Razak is accused of diverting funds to his private bank account. (19.11.2016)

The former Malaysian Prime Minister Mahathir Mohamad could make history as the world's oldest head of government and successful 'comeback retiree' if he beats incumbent Najib Razak in the country's upcoming elections. (26.01.2018)