Malaysian politician Anwar Ibrahim has promised to back his onetime rival, Mahathir Mohamed, after being freed from jail. He is considered a prime minister in-waiting following the country's shock election result. 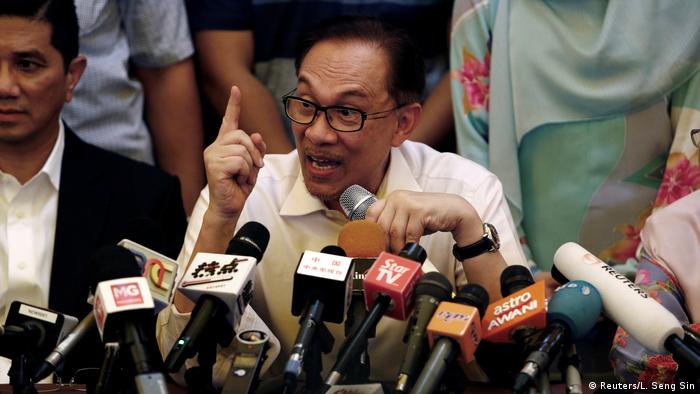 Anwar, the leader of the People’s Justice Party (PKR) received a royal pardon for a sodomy conviction, which was widely viewed as trumped up.

"I am here as a concerned citizen to give complete support to manage the country on the understanding that we are committed to the reform agenda, beginning with the judiciary, media and the entire apparatus," he said in a news conference at his home.

Anwar thanked Malaysian voters who he said "stood by the principles of democracy and freedom" before adding that he would take some time off before resuming his political career.

Despite being in prison, the 70-year-old joined forces with Mahathir in a four-party alliance to win a shocking victory in the May 9 elections, ending more than 60 years of rule by the Basiran National coalition and ousting Prime Minister Najib Razak.

Anwar was once a protege of Mahathir, who was previously prime minister from 1981 to 2003. The two had a falling out over the handling of the 1997 Asian financial crisis, resulting in Anwar being sacked as deputy prime minister.

Anwar was then sentenced to five years in prison for sodomy and corruption in what he and rights groups called a politically motivated attack.

He was freed in 2004, but then jailed again for five-years in 2015 for sodomy, in what his supporters considered an attempt by Najib to end his political career.

Anwar, 70, was set to be released from jail at the beginning of June, but without the royal pardon he would have faced a five year ban in politics. The pardon now paves the way for him one day becoming prime minister.

On Wednesday, he said he had buried the hatchet with his one-time rival saying "it was a long time ago."

Mahathir, the oldest head of government in the world at 92, was sworn in as prime minister on Thursday. He has agreed to eventually hand power to Anwar.

However, on Tuesday the prime minister said he planned to stay on for "an initial stage, maybe lasting one or two years."

"I will play a role in the background even when I step down," he said.

Meanwhile, there are signs of early tensions between Mahathir and Anwar's PKR, which won the most seats in the four-party alliance that ended Basiran National's entrenched rule. PKR is demanding a proportionate number of positions.

So far only three ministers have been appointed, in addition to Mahathir and Anwar's wife, Wan Azizah Wan Ismail, as deputy prime minister.

Separately, Malaysia and six countries are investigating defeated prime minster Najim over corruption at the state fund 1MDB. He has been barred from leaving the country.

Anwar Ibrahim says he has a parliamentary majority to form a new government. His claim comes less than seven months after the collapse of the previous administration of Mahathir Mohamad.