Mahathir said the king has indicated he was willing to grant a full pardon to Anwar immediately. The new prime minister has pledged to give his job to Anwar, who he sacked as his deputy two decades ago. 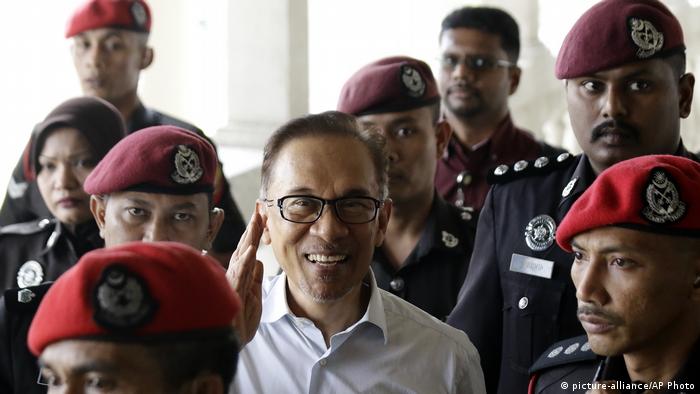 Mahathir said the Malaysian king has indicated he was willing to give an immediate pardon to Anwar, which would pave the way for the opposition icon to make a political comeback.

Anwar was jailed on sodomy charges for the second time. He has maintained the charges were politically motivated.

"It is going to be a full pardon, which means not only pardoned, but he is released immediately and after that he will be free to participate fully in politics," Mahathir told reporters the day after he was sworn into office. At 92 years old, Mahathir has become the world's oldest elected leader.

He didn't say how long the process will take and whether Anwar could be freed before his sentence ends on June 8.

Mahathir has pledged to step down and give the prime minister's post to Anwar when he is pardoned. He said Anwar's wife Wan Azizah Wan Ismail, who stood beside Mahathir as he made the announcement, will be the deputy prime minister in his Cabinet.

Mahathir, referred to as the "Father of Modern Malaysia," fell out with Anwar during his previous 22 years in power, which ended in 2003. Mahathir had Anwar imprisoned for the first time on fake sodomy charges in 1998.

But the two agreed to set aside their past differences and joined forces in an unlikely alliance to fight against scandal-hit former premier Najib Razak. The alliance registered a shock win in Wednesday's election, ending the ruling coalition's 60-year unbroken grip on power.

Mahathir said on Friday he will form a lean Cabinet with 10 core ministries. He said his four-party alliance will hold a meeting on Saturday to name the ministers. Malaysian Cabinets have in the past had more than 30 ministers.

"Whether Anwar will be part of the cabinet or not will be decided when the time comes," he said.

Mahathir has vowed to return billions of dollars lost in a corruption scandal at state fund 1Malaysia Development Berhad (1MDB). It was a major issue in the run-up to the election and played a major role in the ouster of Najib, Mahathir's former protegé.

Mahathir said the country's attorney general was wrong to clear Najib in the 1MDB probe in 2016.

"He, in fact, has hidden evidence of wrongdoing, and that is wrong in law. We have to do what is permitted by the laws of this country," he said.

Opposition leader Rafizi Ramli became the second candidate for prime minister to come under police investigation under the new law within days. The probes come with elections slated for next week. (05.05.2018)