Venezuela's President Nicolas Maduro is promoting a "miracle" medication that he said would cure patients who contracted the novel coronavirus. But his government has released no evidence to back the claims. 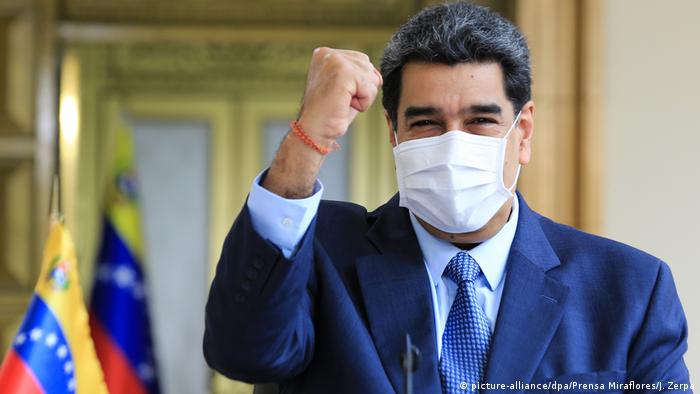 Venezuelan President Nicolas Maduro is promoting a "miracle" medication that he said neutralizes COVID-19 with no side effects, a claim doctors said was not backed by science.

"Ten drops under the tongue every four hours and the miracle is done," Maduro said in a televised appearance on Sunday. "It's a powerful antiviral, very powerful, that neutralizes the coronavirus."

"It has gone through a period of nine months of study, experimentation, clinical application. On the sick, on the very sick, on people who have been intubated, and we recovered them," Maduro said.

He described the liquid as "miracle drops of Jose Gregorio Hernandez," a 19th century Venezuelan doctor who was beatified by the Roman Catholic Church last year, without elaborating on the active ingredients.

Maduro said the treatment, which he called carvativir, had been under testing for nine months among Venezuelans ill with the coronavirus. He said he plans to distribute it nationwide and to other nations as well.

His government has so far released no evidence to back up the claims.

Scientists at home and abroad remained skeptical. Venezuela's National Academy of Medicine in a statement late on Monday said Carvativir "has therapeutic potential against coronavirus."

"Nonetheless, it is prudent to wait for more data from the Carvativir tests ... to consider it a candidate for an anti-COVID-19 medication," reads the statement.

Francisco Marty, an infectious diseases expert at Brigham and Women's Hospital in Boston, tweeted: "The treatment claim for #Carvativir's brand for #COVID19 is unsubstantiated by any clinical data, but as a #Maduro press-release, it may hit the social media waves for another high of sublingual bread & circus."

David Boulware, professor of medicine and an infectious diseases physician at the University of Minnesota Medical School, noted the lack of scientific evidence. "This is, just as with other things, people trying to sell, you know, some magic beans as the solution to a complex problem," Boulware told The Associated Press on Tuesday. "This would be great if it worked, but I would like to see the data."

It's not the first time the Venezuelan leader has promoted a cure. In October, he notified the Pan American Health Organization that Venezuelan scientists discovered a molecule that nullifies the replication capacity of the new coronavirus. He hasn't spoken of that development since. He's also promoted a special herbal tea he claims can fend off the virus and other ailments.

Other leaders too have embraced solutions dismissed by scientific studies. Former US President Donald Trump and Brazil's Jair Bolsonaro both stubbornly touted an antimalarial drug despite repeated studies finding it ineffective and possibly dangerous. Madagascar promoted a fruity drink as a magic cure-all. And Belarus' Alexander Lukashenko lauded vodka, trips to the sauna, and games of ice hockey as potential COVID tonics.

The new coronavirus hasn't hit Venezuela as hard as other South American countries such as Brazil, Ecuador and Peru, though many experts say that's likely because sanctions against Maduro's government have sharply limited travel there.

The country has officially reported some 123,709 COVID-19 cases and 1,148 deaths - figures the opposition and some healthcare workers say understate the impact of the virus in the South American nation, whose health system has deteriorated.

Since October, Venezuela has been part of trials for the Sputnik V vaccine from Russia, a staunch ally of Maduro's government. Venezuela signed a contract in December with Russia to buy the vaccine, but inoculations aren't scheduled to start until April.

Venezuela will hold parliamentary elections on Sunday — in the middle of one of its biggest economic crises in decades. Daily life in the country is marked by chronic hunger and poverty.