Made in Germany: Ukraine pendants without Crimea | Europe | News and current affairs from around the continent | DW | 18.06.2021

A German jewelry maker is selling pendants shaped in the form of Ukraine — just without the Crimean Peninsula, which Russia annexed in 2014. DW tried to found out more. 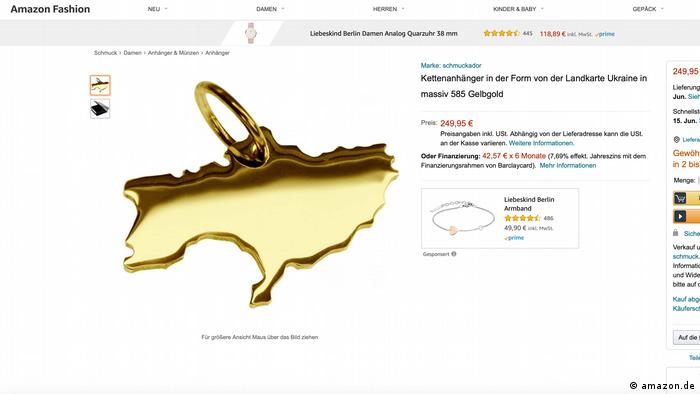 The pendant is no longer available on Amazon

S.W.W. Schmuckwaren is a company based in southern Germany that produces and sells jewelry, including gold and silver pendants shaped like the outlines of countries. They cost €22.95-€295.95 ($27-$350) and most of the countries are shaped in such a way that corresponds to their internationally recognized borders. There is one pendant, however, that is missing a region: Ukraine does not include the Crimean Peninsula.

Since Russia's annexation of the Ukrainian peninsula in 2014, there has been an ongoing heated debate as to how the territoy should be represented on maps. Ukrainian maps continue to depict it as being part of national territory, while Russian maps claim it as part of the Russian Federation.

In the US and European Union, the peninsula is usually depicted in the same color as Ukraine, but in some cases it is clearly marked as disputed territory. On its map for German users, tech giant Google uses a dotted line to separate Crimea from the rest of Ukraine but a solid line to mark state borders.

When DW asked Sven Wilhelm, the head of S.W.W. Schmuckwaren, why his company had decided to make Ukraine pendants without Crimea, he responded that the reason had nothing to do with politics. He said that it was merely "technically impossible" to include the Crimea.

Wilhelm did not seem to be overly concerned about the fact that the pendant did not correspond to the shape of Ukraine with its internationally recognized borders. He pointed out that nobody was obliged to buy it: "We also have Crimea on its own. You can buy Ukraine and Crimea."

Until recently, the mass retailers OTTO and Amazon were also selling the Ukraine pendant on their sites. DW contacted them both for a statement.

"We removed the pendant immediately from our shop and asked the retailer never to sell it or similar products via otto.de," said Frank Surholt, spokesman for the German company, which is known in Ukraine.

Amazon Germany took note of DW's inquiry but declined to comment. However, the pendant was later marked as being "currently unavailable" on its website. 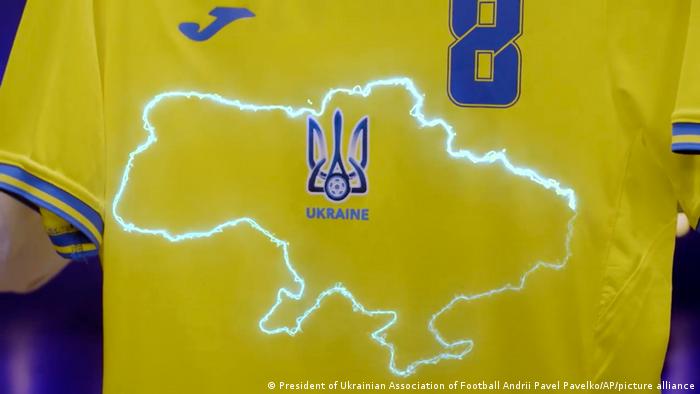 Ukraine's soccer shirt for this year's Euros has been controversial

Although many governments and international organizations recognize Crimea as being part of Ukrainian territory, the peninsula is often depicted with a border to the mainland, which has led to a number of protests in Ukraine.

In 2018, the Estonian publisher Studium published an English-language schoolbook that featured a map depicting Crimea as part of the Russian Federation. It was later recalled by Estonia's Education and Research Ministry.

There have also been a number of incidents in which media outlets, including the BBC, ARTE, the French daily Le Monde and The New York Times, published maps of Ukraine that did not include Crimea. Usually, however, they have reacted immediately to complaints from readers or Ukrainian diplomats and published rectifications. 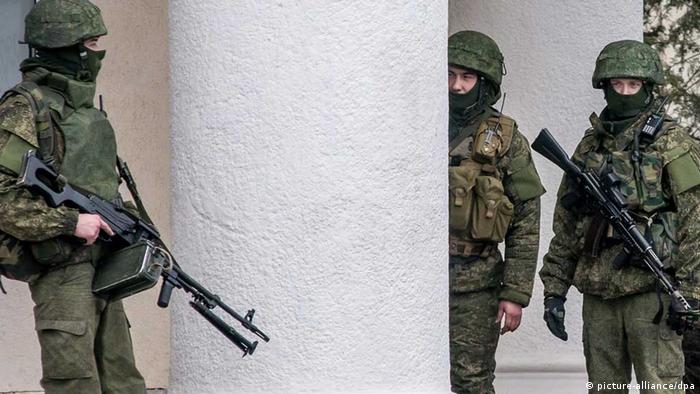 In 2014, unidentified soldiers seized control of strategic buildings in Crimea

In February 2014, soldiers wearing uniforms but no insignia or identifying marks occupied government buildings and strategic facilities in the Autonomous Republic of Crimea. Russian President Vladimir Putin later admitted that they were part of the Russian military. On March 16 of the same year, a disputed referendum, in which voters were asked whether they wanted to be part of the Russian Federation or wanted greater autonomy within Ukraine, took place in Crimea. Russia then formally incorporated Crimea as a subject of the Russian Federation. Most of the international community considers this an illegal annexation, and the EU and the US have imposed economic sanctions on Russia.

This article was adapted from Ukrainian and German

The foreign ministers of the G7 group of economies have told Russia to "de-escalate" tensions on its border with Ukraine. World powers kicked Moscow out of the former G8 club over its 2014 annexation of Crimea.