NATO allies have signed a protocol that could see the tiny Balkan country become the military alliance's 30th member. Macedonia's NATO membership had been blocked for a decade by neighboring Greece over a name dispute. 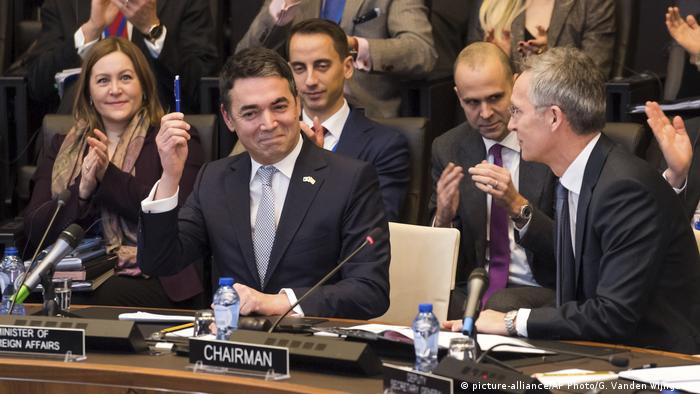 Macedonia came a step closer to joining NATO on Wednesday after the two sides signed accession papers in Brussels.

"This is a historic occasion," Stoltenberg told NATO country envoys before they signed the document. "We have waited for you to join our family for a long time."

Macedonia's entry into the world's most powerful military alliance had been blocked by Greece for a decade over a name dispute. But Athens dropped its opposition after the former Yugoslav republic agreed to change its name to the Republic of North Macedonia.

Dimitrov said the ceremony "is the result of the work of many generations," and he thanked the Greek and Macedonian prime ministers for overcoming the name dispute.

"This was not inevitable, this was not even very likely to happen," he said, lauding it as proof that "the impossible is actually doable and possible."

The accession protocol must be ratified by all 29 NATO members. Greece is set to become the first to do so this week.

The settlement of the name dispute between Athens and Skopje also paves the way for Macedonia to join the European Union.

The EU's enlargement commissioner Johannes Hahn congratulated Macedonia after the NATO ceremony, saying the move was "a contribution to peace and stability" in the Western Balkans.

Earlier this week, Macedonian Prime Minister Zoran Zaev said he hoped his country could launch membership talks with the EU in June.

The low voter turnout for Macedonia's referendum is a bad starting point for the country's future development. The West's hesitation has also contributed to this outcome, writes Adelheid Feilcke. (01.10.2018)

The naming dispute between Greece and the Former Yugoslav Republic of Macedonia has roots that go back to antiquity. The problem is that the boundaries of the region known as Macedonia have changed greatly over time. (25.01.2019)

Belarus: Over 100,000 protest against Lukashenko ahead of strike ultimatum 0m ago

Attempted hijack of oil tanker off coast of England 43m ago

Thailand: Protesters keep up pressure ahead of parliamentary debate 2h ago