Police in the French city of Lyon say a Greek Orthodox priest has been critically injured in a shooting. The country remains on high alert after two deadly knife attacks over the past two weeks. 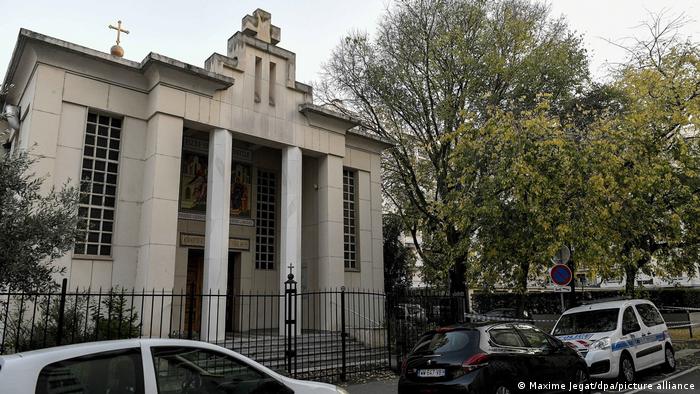 An attacker armed with a sawn-off shotgun wounded a Greek Orthodox priest in a shooting in the southeastern French city of Lyon before fleeing, police sources said on Saturday.

The priest was closing his church in the city's seventh arrondissement when the attack happened, the source told AFP, who asked not to be named.

Reuters cited an anonymous police source as saying that the priest was fired on twice at around 4 p.m. local time (1500 UTC/GMT), and was treated on site for life-threatening injuries.

The priest is now in a local hospital after being hit in the abdomen, a police official told The Associated Press.

Prime Minister Jean Castex, who was visiting Rouen, said he was heading back to Paris to assess the situation.

A suspect was arrested several hours later at a kebab shop, the source said.

"A person who could correspond to the description given by the initial witnesses has been placed in police custody," public prosecutor Nicolas Jacquet said in a statement, adding that the suspect had not been carrying a weapon when he was arrested.

The reason for the attack is unclear.

The French anti-terrorism prosecutor's office has not been brought in, as is normal when law enforcement officials suspect a terrorism link, France's BFMTV broadcaster said.

France is still reeling from two deadly knife attacks — a beheading of a teacher near Paris two weeks ago and the killing of three people at a church in Nice on Thursday.

The beheading was carried out in revenge for the teacher showing his class cartoons of Islam's founder, which were originally published in the satirical magazine, Charlie Hebdo.

The attacks have a debate that pits the country's strict secularism and free speech laws against Islamic religious sensitivities.

President Emmanuel Macron has vowed to crack down on Islamic radicals and defended freedom of expression, in defiance of criticism by Muslim leaders and a call by Muslim countries to boycott French products.

Ministers had warned that other Islamist militant attacks could take place.

The government has deployed thousands of soldiers to protect sites such as places of worship and schools.