Little sign of progress on US debt deal | World| Breaking news and perspectives from around the globe | DW | 19.07.2011

Negotiations in Washington to raise the nation's debt limit have faltered on the partisan political divide. Credit rating agencies and Asian countries have warned the US to adopt responsible fiscal policies. 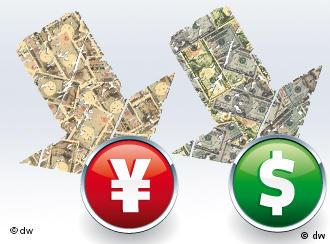 Failure to reach a deal could have global financial consequences

Republicans and Democrats have reached an impasse in an escalating ideological battle over raising the US debt ceiling, with the rating agency Moody's threatening to downgrade Washington's credit worthiness if the two sides fail to find a compromise by August 2 - a move that could destabilize the global economy.

"It's the foundation of our financial system," US Federal Reserve Chairman Ben Bernanke said during a recent congressional hearing. "The notion that it would become suddenly unreliable and illiquid would throw shock waves through the entire global financial system."

Both political parties agree in principle that the US must increase its $14.29 trillion (9.8 trillion euros) debt ceiling in order to continue paying its bills and avoid a short-term default on its financial obligations. Negotiations, however, have reached a stalemate due to a partisan divide over the appropriate balance between taxes and spending cuts. 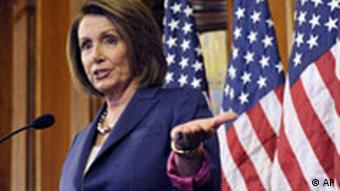 Democrats like Nancy Pelosi are reluctant to cut spending

Republicans have preconditioned any debt limit increase on parallel cuts in spending while at the same time rejecting tax increases across the board. Democrats, meanwhile, have been reluctant to make cuts in social programs such as Medicare and Medicaid that could alienate their electoral base, proposing instead to raise taxes on wealthier Americans.

Republican House Speaker John Boehner and President Obama appeared on track to bridge the divide through a "grand bargain" that would have included a $3 trillion reduction in spending and $1 trillion in tax increases. Rank-and-file Republicans led by House Majority Leader Eric Cantor, however, rejected the deal due to the tax hikes.

In lieu of the politically risky "grand bargain," Cantor reportedly called for a short-term solution rooted in spending cuts. Cantor's proposal prompted Obama to dig in his heels against Republican demands in what has become a volatile game of political brinkmanship.

"The problem is that there is no party discipline," Josef Braml, an expert on American politics at the German Council on Foreign Relations, told Deutsche Welle.

"Obama can't get his liberals on board. On the other side, it's difficult for Republicans to get the Tea Party guys involved because they would commit electoral suicide if they agreed to tax increases."

Christian Lammert, an expert on US domestic politics, says that while fiscally conservative Tea Party Republicans stubbornly reject tax increases, many progressive Democrats are adamant in their opposition to cuts in social programs like Medicare, Medicaid and Social Security.

"That's the third rail of American politics," Lammert, with the John F. Kennedy Institute at the Free University of Berlin, told Deutsche Welle.

"If you touch it, this is political suicide especially for the Democratic Party. There is a lot of opposition within the party, especially in the progressive wing that will not support any deal between Obama and the Republicans that will be about such huge spending cuts." 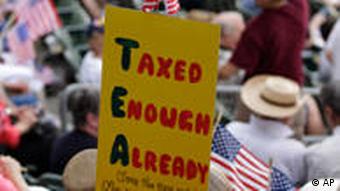 According to Lammert, the US ultimately has no choice but to implement both tax increases and spending cuts in order to gain control over its $14 trillion national debt, regardless of what the ideological predispositions of the far-right and far-left prescribe.

Such measures, however, remain difficult to implement because they place new burdens on an American public still reeling from high unemployment, stagnant wages and low savings.

"The income inequality is rising in the United States to a level that the United States has not known since the New Deal and this will be a problem if this gap widens and the poverty rates go up," Lammert said.

"It's just a question of time until this gets [to be] so huge a problem that there might be some forms of social unrest."

No longer a 'safe haven'

Not only has the weary American voter lost patience with Capitol Hill, but the international community is also beginning to challenge Washington's economic policy. Moody Investor's Service has placed America's AAA credit rating on review for a possible downgrade.

Such a move would be "extremely painful" for the US, said Jacob Kirkegaard from the Peterson Institute for International Economics in Washington. The US market for government bonds is, after all, not just some exchange, but rather the safe haven for investors worldwide, he said.

"The problem is that when you lose the status of 'safe haven' - which inevitably occurs with a downgrade - interest rates rise over a longer period of time," Kirkegaard said. It could take decades for the situation to normalize again.

In addition, the US would have to work hard to regain the trust it wilfully put at stake, he said.

"The US is not bankrupt, we aren't Greece," Kirkegaard said. The blame lies elsewhere: "A political system in America that is unfortunately unable or reluctant to raise the funds necessary for the style of government we want." This does not only apply to domestic policies, but also the global role of the US, he said. International commitment costs money.

According to Lammert, a downgrade would make it even harder for the US to get new credit.

"This will not help the economic recovery," he said. "This will mean a rise in unemployment and that's the major problem right now for the United States."

Washington's creditors in Asia have also begun to speak more forcefully as they worry that their own national interests are at risk in a system that appears unable to resolve its own problems.

The consequences of a US default are difficult to predict, although borrowing costs would certainly increase, putting even more pressure on an ailing American economy that still stands at the center of the global financial system.

"You can never tell where sheep are running," Braml said. "If it was true that markets are rational you could predict it, but we all know that the markets are anything but rational."

If the US House of Representatives fails to reach a compromise over budget cuts, the federal government will go unfunded and partially shutdown. A shutdown could shake global confidence in the fragile American economy. (08.04.2011)

US President Obama has presented his proposal for tackling America's looming debt bomb. However, Obama's proposal has more to do with presidential politics than budget deficits, according DW's Christina Bergmann. (14.04.2011)