EU criticizes role of US credit rating agencies in debt crisis | Europe | News and current affairs from around the continent | DW | 11.07.2011

Political leaders in Europe have expressed growing criticism of the power exercised by the three major credit rating agencies. EU Justice Commissioner Viviane Reding said breaking up the big three was one option. 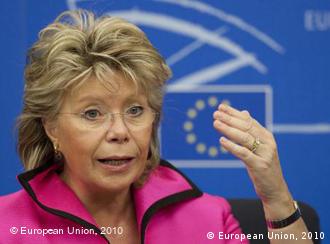 European Union Justice Commissioner Viviane Reding has joined growing opposition to the power wielded by the three dominant, US-based credit rating agencies in the on-going eurozone debt crisis that has brought Greece, Ireland and Portugal to the brink of economic collapse.

Reding told Germany's Die Welt newspaper that "Europe cannot let itself be destroyed by three American private companies." She said there should be more transparency and competition in the way states and businesses are rated.

Reding put forward two possible solutions: "Either the G20 states should act together to break up the three American rating agencies. For example, we could demand that the USA make six organizations out of the current three. Or we should create independent European and Asian rating agencies." 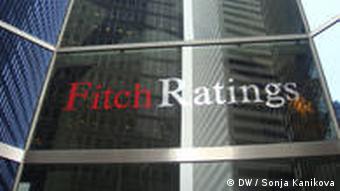 Fitch, Standard & Poor's and Moody's are the big three

She added that it should not be possible for a "cartel" to decide the fate of entire economies and their citizens.

German President Christian Wulff echoed Reding's words, saying it was shocking that the rating agencies Standard and Poor's, Moody's and Fitch continue to exercise so much power but have not been held accountable for bad judgments.

He went on to say that policymakers have become too dependent on private actors in their approach to the debt crisis and need to "re-conquer the primacy of politics."

"We need to restructure the bank landscape, we need a different structure for the rating agencies and we, of course, need new mechanisms for sanctions," Wulff said during an interview with television broadcaster ZDF.

Frank-Walter Steinmeier, the parliamentary leader of Germany's center-left Social Democrats, said that Standard and Poor's, Moody's and Fitch presented a serious problem for the stability of sovereign states.

"In the case of Greece, they slashed the country's rating because its debt was too high and didn't save enough," Steinmeier said. "Later, they slashed Greece's rating again because the rigid austerity program did not result in growth."

"Severely suffering states are systematically driven into bankruptcy," he added.

European politicians have been slamming US-based ratings agencies for downgrading Portugal's creditworthiness. Criticizing the agencies is inappropriate, says DW's Henrik Böhme - as are calls for a European agency. (11.07.2011)

The Standard & Poor's rating agency says a debt rollover plan pushed by French banks would amount to a default, putting a damper on European efforts to solve the Greek debt crisis. (05.07.2011)