A recent spike in coronavirus infections and related restrictions may affect voter turnout. Soaring unemployment and a troubled health care system has triggered nationwide frustration at the coalition government. 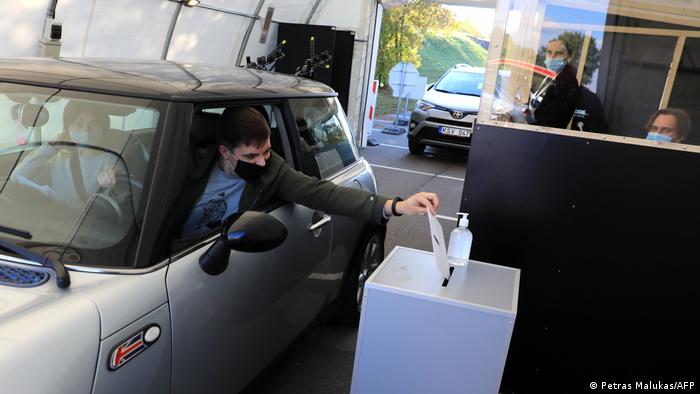 Lithuanians headed to the polls on Sunday for the first round of parliamentary elections, with the ruling four-party centre-left coalition in a tight race with opposition conservatives.

Talks on forming a new coalition after the election are expected, with five or six parties expected to cross the 5% threshold to enter the Seimas assembly. None is likely to receive more than 20% support.

If re-elected, Skvernelis vows to set up state-owned pharmacies nationwide and introduce an annual "13th pension" cash bonus for senior citizens. His rival, ex-finance minister Ingrida Simonyte, has accused the prime minister of running a disorderly and populist government.

The opposition are set on bridging the economic and educational divide between the country's rural and urban residents.

All of the major parties back the European Union and NATO and support neighbouring Belarus's democratic opposition.

A recent rise in COVID-19 cases and new restrictions to combat the spread of the virus, as well as soaring unemployment, has triggered nationwide anger over Lithuania's current coalition government.

The surge in infections may affect turnout among Lithuania's  2.4 million registered voters.

Around 7.3% have already cast their ballots in an early voting, according to the Central Electoral Commission.

Voters are required to adhere to physical distancing rules at polling stations, wear face masks, and have been told to bring their own pens to minimize infection risk.

For the first time ever, the Baltic country has authorized drive-in voting due to the pandemic.

Despite the recent spike in cases, Lithuania's coronavirus related-deaths are well below the EU average and in the second quarter of 2020 its economy decreased 4% year-on-year – the second best result in the EU.

Many Lithuanians, however, think the government's focus on fighting the virus has left thousands of patients without access to proper healthcare.

Others say the government took insufficient action in helping businesses during its coronavirus lockdown. In February, Lithuania's unemployment rate leaped from 9% to more than 14% in October.

Poverty and income inequality levels in Lithuania remain among the highest in the EU.

The first round of the election on Sunday will fill around half the seats in the 141-member parliament using the proportional representation voting system.

The final round of voting in single-member constituencies – where no candidate gets a majority – has been scheduled for October 25.