A former finance minister and an economist have defeated Prime Minister Saulius Skvernelis, who has said he will resign. The popular president, Dalia Grybauskaite, has reached the end of Lithuania's term limits. 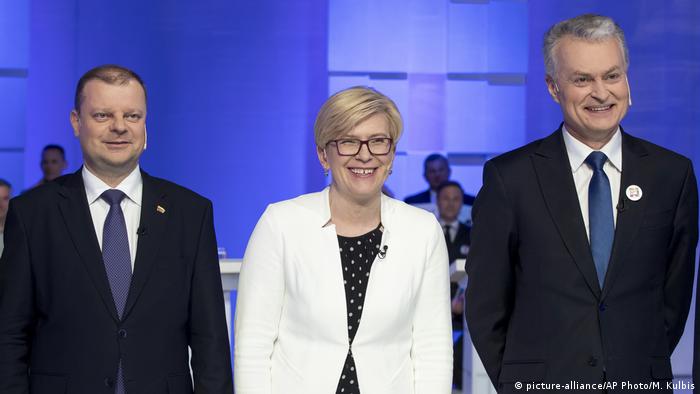 Lithuania's Prime Minister Saulius Skvernelis (above left) conceded defeat in the country's first round of presidential elections on Sunday. Ingrida Simonyte (above center) and Gitanas Nauseda (above right) are now set to face each other in the runoff scheduled for May 26.

"I really believed I would get to the runoff, but the result shows that my expectations were too high," Skvernelis told a group of supporters in the capital Vilnius. He reiterated his campaign promise to resign in July if he did not make it to the second round.

Simonyte, the former finance minister, and Nauseda, a onetime senior economist at one of the country's biggest banks, had been the front-runners going into Sunday's vote.

Face of austerity vs. political novice

During the financial crisis that began in 2008, Simonyte became the reluctant face of fierce austerity measures that made deep cuts into public salaries and pensions. However, her supporters have argued that her actions helped Lithuania weather the crisis and led to an economic rebound. She has been a member of parliament since 2016.

Nauseda is by comparison a political novice, but he is known as a sharp commentator on economic and financial matters. His policy positions are steadfastly moderate, and his backers see him as a breath of fresh air from politics as usual. 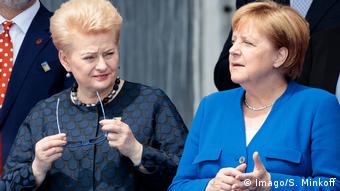 President Dalia Grybauskaite, pictured with German Chancellor Angela Merkel, has reached the limit of her tenure

Early Monday, with most of the votes counted, Lithuania's electoral commission put Nauseda at the front of the nine-candidate pool with 31.2% of the vote. Simonyte had 27.2%, while Skvernelis managed only 22.2%.

Incumbent President Dalia Grybauskaite will be stepping down after reaching the country's term limit, finishing her second five-year tenure in office.

Grybauskaite has been nicknamed "the Iron Lady" and "the steel magnolia" in reference to her no-nonsense style and tough stance against Russian President Vladimir Putin.

Some critics saw Skvernelis' many public verbal run-ins with the highly popular Grybauskaite as indicative of his inability to be the kind of statesman a president ought to be.

A Lithuanian campaign uniting civil society and all major news outlets to counter Russian propaganda sets a precedent, but the dangers of being labelled "fake" are a cause for concern. Benas Gerdziunas reports. (27.09.2018)