Lithuania set to ban fake news from Russia | Europe | News and current affairs from around the continent | DW | 10.02.2019

Lithuanian lawmakers want to outlaw spreading distrust of the state and attempts to distort historical memory. Critics say the bill to crack down on disinformation equates investigative journalism with propaganda. Walking outside the Lithuanian parliament, a toddler cries out: "Davai, davai," pulling his mother behind him.

Loosely translated as "let's go," the Russian phrase is common in colloquial Lithuanian and often heard from sports competitors on TV. The woman responds bluntly: "There's no such word [in Lithuanian]!"

The interlude on the snowy pathway reflects what some describe as child-like attempts to fight Russian disinformation and domestic problems in the Baltic nation. Instead of tackling the problem itself, the ruling majority is only eliminating the issue from public discourse, according to Dainius Radzevicius, director of the Lithuanian Union of Journalists (LZS).

On January 11 last year, the day before Lithuania marked the anniversary of the 1991 fight for independence from the Soviets that left 14 dead and hundreds injured, the majority in parliament, dominated by the populist Greens and Farmers Union party, took steps to ban critical information from the public discourse.

The bill called for banning "attempts" in the media to "distort Lithuania's historical memory," "promote distrust of Lithuanian state and institutions" and "decrease society's will to defend the nation," and included numerous ambiguous terms. The proposal was nominally an attempt to transport EU legislation on the provision of audiovisual media services into Lithuanian law.

Ausrine Armonaite is one of the bill's opponents. "This legislative projects puts the Kremlin's propaganda side by side with investigative journalism," said the 29-year-old lawmaker who is expected to become head of a new politically liberal party. Armonaite said it was roughly the 12th time the ruling majority has moved against free speech. 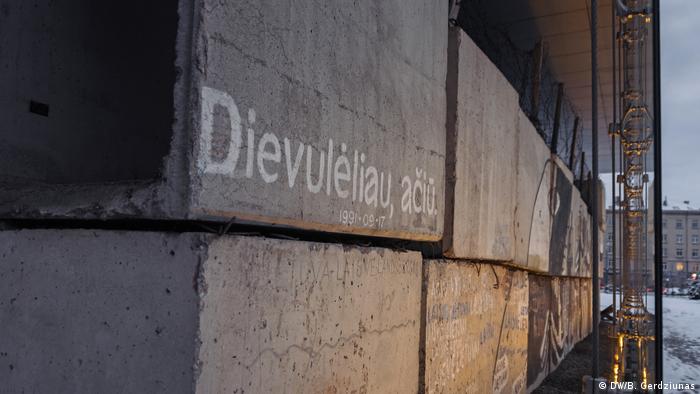 A section of the barricades set up by the 1991 independence movement in Vilnius has been preserved. The graffiti reads: "Thank you, God"

The proposed changes were taken in part — and out of context — from Lithuania's national security strategy. Yet the resulting bill reflects neither the EU legislation nor the security policy document.

"[The majority] is choosing the easiest route by taking a generic formula and banning everything within it," said the journalists union's Radzevicius. "There are no legal definitions of what 'distrust' of state institutions is, and banning 'distortions of historical memory' is very dangerous to freedom of speech, as memory is a constantly evolving process."

Ramunas Karbauskis, chairman of the Greens and Farmers Union, claimed the bill would help protect the upcoming May presidential election from disinformation. But the proposals, said Radzevicius, "have nothing to do with elections, nor with fake news — as the concepts are tied to the spread of information, not disinformation."

Despite innovative campaigns to fight fake news and regional disinformation, Lithuania's increasingly assertive parliamentary majority has employed the Russian threat to impede open discourse and media independence and sought to reel in the country's public broadcaster, LRT. The pretext of "protection from the Kremlin" is now being used to "hinder the work of journalists in Lithuania," said Liberal Movement leader Eugenijus Gentvilas.

Last year a parliamentary commission — which included Karbauskis — began investigating the country's public broadcaster, LRT. The probe came on the heels of numerous corruption investigations into the chairman and his party by Lithuanian media, including LRT. At the same time the inquiry was underway, parliament restricted public access to land and business ownership data, which had been previously available to journalists.

"There are those who fear pro-Russian propaganda can use the [public] data," Sarunas Cerniauskas, director of investigations at 15min.lt, a prominent Lithuanian media outlet, commented in an op-ed.

In 2016 the conservative majority had attempted to outlaw criticism of public figures, legislation that was subsequently vetoed by President Dalia Grybauskaite. 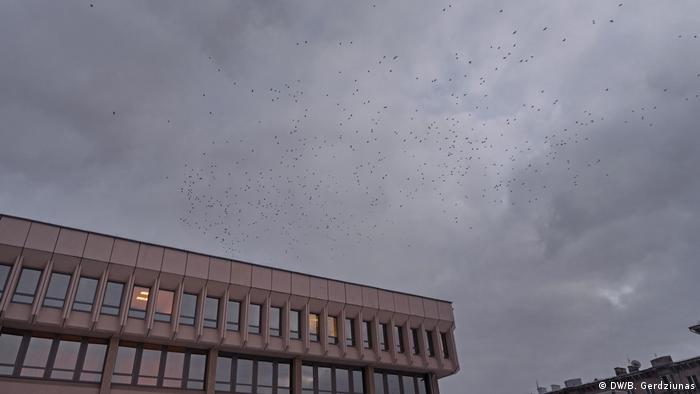 Lithuanians genuinely view Russia as a threat, while populism combines those fears with distrust of the media.

"The threat of the Kremlin in Lithuania is real, and every rational political party sees it," said Armonaite, "but if the [ruling majority] would look at it through the prism of human rights and press freedom, such changes to law wouldn't come up, even in the context of current threats."

The push to outlaw "attempts to distort historical memory" refers to the period from 1940 to 1991, when the Baltics were occupied by the Soviet Union. Some members of the older generation continue to believe the three Baltic nations joined the USSR freely. Russian television in Lithuania amplifies this narrative and spreads conspiracy theories surrounding the independence movements.

The bill would not add legal instruments to fight disinformation from abroad. It could, however, mute domestic discussion of Holocaust complicity and anti-Soviet resistance, which remain taboo topics in much of the Baltics today.

"I have always been against someone dictating to historians what truth should be found," said Terese Birute Burauskaite, director of the publicly funded Genocide and Resistance Research Center of Lithuania. "The goal is to aim for discussions," she added.

In step with Russia

Meanwhile, the political opposition has submitted a counterproposal to remove the ambiguous terms from the draft and consultations on the bill are set to begin. It's unclear when a final vote will take place. 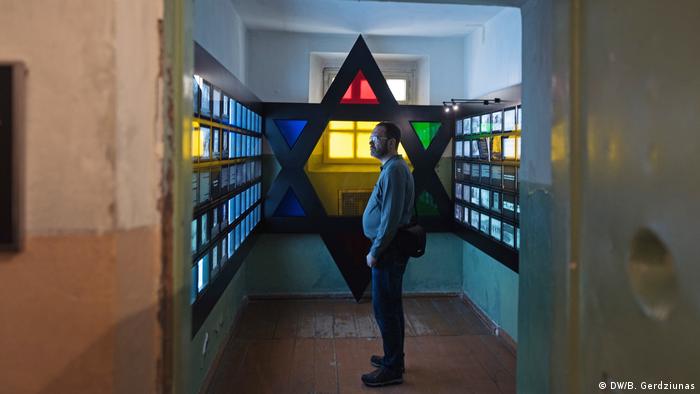 Meta Adutaviciute and Erika Leonaite of the Human Rights Monitoring Institute, in Vilnius, are critical of the planned legislation. "[Seen through] the very narrow prism of the Kremlin threat, and when there is a lacking understanding of human rights, you get such results," said Adutaviciute.

In her six years at the institute, Leonaite has "not seen another parliament that has taken so many initiatives to restrict freedom of the media and self-expression."

Despite the hopes among Lithuanian lawmakers, diplomats and NGOs that their country would become a leader in the fight against disinformation, parliament appears to be treading the same path as in Russia. In January, Russian lawmakers moved to ban fake news and criticism of the state.

The EU and NATO have teamed up in Europe's far north to fight hybrid threats from "tweets to tanks." A new center of excellence focuses on resilience to menaces from little green men to huge humanitarian catastrophes. (03.10.2017)