Lithuania caught up in spying, illicit border trade | Europe| News and current affairs from around the continent | DW | 17.12.2016

Wedged between Belarus, Russia’s coastal enclave of Kaliningrad, and western Europe, Lithuania has long served as a gateway for all things illicit in and out of the EU. Jonathan Brown reports from Poskonys. 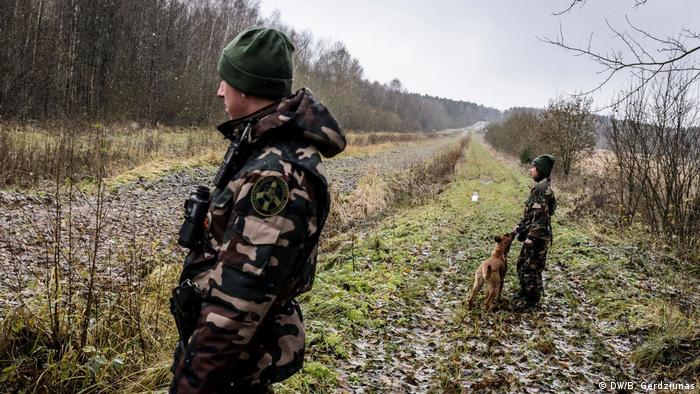 The headlights of Linas Taskunas' patrol jeep veer off the main road toward a gravel track in a dense forest.

The jeep jolts over potholes for a kilometer through tall pines before reaching a muddy forest clearing. As the engine cuts, headlights illuminate the painted wooden poles that mark the eastern edge of the European Union.

"There are moments I'll never forget," says Taskunas out of the darkness, reflecting on 13 years of patrolling Lithuania's eastern borders, "and moments I wish I could forget."

Lithuania's porous border with Belarus, which has proven difficult and costly to secure, is a magnet for organized crime groups and foreign intelligence agencies whose methods have grown increasingly sophisticated as EU governments work to shutter their operations.

Border guards in the otherwise sleepy village of Poskonys, where jobs are scarce, say that members of a local smuggling ring recently shot at their outposts and attempted to set their patrol vehicles on fire.

After a quiet night trudging along the muddy border in light snow and complete darkness, Taskunas and his colleague return to base. On route, their jeep passes an aging Mercedes, parked with its lights on. It's likely a spotter, Taskunas tells DW, one of  the smugglers tracking border police movements. 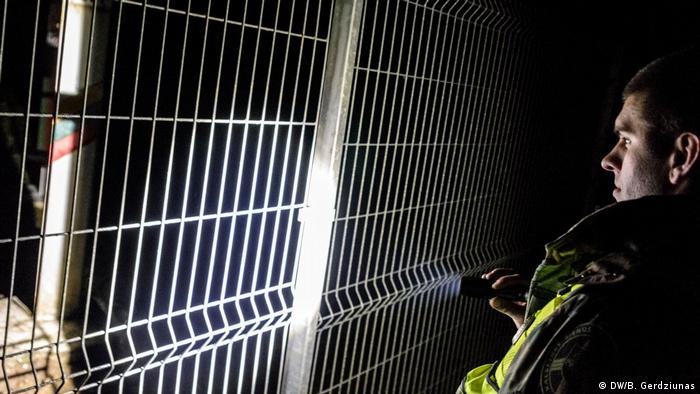 Only 33 percent of Lithuania's external EU border is secured with active surveillance systems. The gaps are vulnerable to organized crime groups so committed to their trade that they have reportedly repaired roads in rural areas to ease passage along their smuggling routes.

Pozela said the profits typically go into bolstering operations and into organizers' pockets. But some of that money is invested in technologies and equipment used to wage a more effective battle against border authorities, including the purchase of night-vision and thermal goggles.

The contraband itself is predictable to a point. Rare amber stones specific to the Baltic States, illegal drugs, cars to be salvaged for parts, cigarettes and people are all reported to have crossed the Lithuanian border illegally in recent years.

In General Zydrunas Vaikasas' corner of the country, called the Dieveniskes Noose, it's mostly cartons of cigarettes named after the Belarusian capital, Minsk, that his team intercepts.

"The smugglers typically have three times as many people as we do," he told DW in his office. On both sides of the border, he says, teams of spotters monitor the border guards' movements.

This smuggling of cigarettes over Lithuania's borders might seem trivial, but it's part of a trade whose cumulative impact is significant.

According to the European Fraud Office, "Tobacco smuggling causes heavy yearly losses to the budgets of Member States and the EU in evaded customs duties and taxes." The organization estimates that illegal tobacco smuggling costs national and EU budgets more than 10 billion euros ($10.5 billion) annually in public revenue.

The cartography of General Vaikasas' jurisdiction makes it unattractive to people smugglers. But in recent years, well-trodden human trafficking routes, mostly through northern Lithuania, have become witness to an unlikely phenomenon.

A majority of detainees in a migrant holding center in the eastern Lithuanian city of Padrade have travelled from Vietnam. A handful of Russian men of Chechen descent who share a cell next to the Vietnamese migrants are likely their smugglers, says Aleksandras Kislovas, who oversees the center.

Kislovas says that the increase of Vietnamese citizens travelling to Europe is due to the economic crisis in Russia, where many Vietnamese migrants had worked illegally. 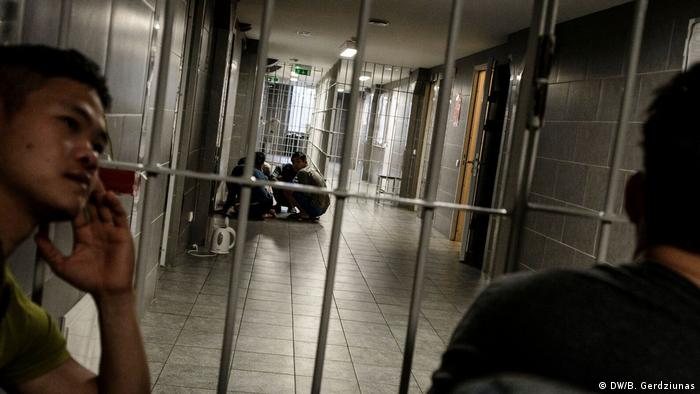 "They fly from Hanoi to Moscow, then use trains and buses to get to Minsk in Belarus. At this point they have meetings with smugglers. Usually, it's a large group between 10 and 20 people who are escorted by Chechens. Once they cross into Lithuania, they travel to Poland."

In September, Lithuania's border guards detained a suspect of Chechen origin in a cross-border trafficking sting which included Latvian and Polish authorities. Eleven Russians, mostly Chechens, were arrested as part of the operation, while 42 illegal Vietnamese migrants were detained in Poland.

Against the backdrop of Lithuania's war against smugglers, an internal battle is being waged on corruption within the Border Guard. In the last 12 years, 200 employees have been charged with corruption, leading to 130 convictions. In Lithuania, border guards are among the lowest paid civil servants, which can make cooperating with smugglers all the more tempting financially. "Probably not one country in the world could devote enough funds to their officers that could rival the sums the smugglers offer," Pozela said.

But Lithuanian authorities are less concerned that their border guards will be bought by smugglers than they will be recruited by foreign intelligence agencies.

In Estonia, which shares a 294-km (183-mile) border with Russia, three smugglers arrested between 2015 and 2016 were found to have cooperated with Russian intelligence and provided the agency with information on Estonian military and border authorities.

The report added that "it has become a trend that the FSB seeks to recruit persons who organize smuggling activities and [the] transportation of smuggled goods. The FSB proposes to facilitate further smuggling in exchange for covert cooperation. The FSB takes particular interest in their contacts in the Lithuanian law enforcement institutions."

Pozela says he's not surprised. "We know that there are attempts to recruit our own officers who travel to a certain foreign country; we also have information that the FSB are actively observing our buildings, structures, and weapons."

"We're geographically in an unlucky position," Pozela added. "It means we always have to be aware and have our eyes and ears open."