Life of slavery — the perpetuation of bonded labor in Pakistan | Asia | An in-depth look at news from across the continent | DW | 25.12.2019 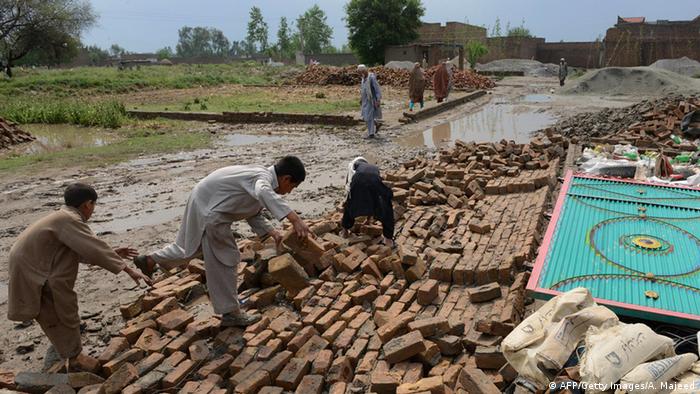 In the Kot Momin town in Pakistan's Punjab province, farmers work round the clock picking and processing a variety of oranges. The produce from the Sargodha district's orchards dominates the domestic market, as well as the country's major export destinations like Indonesia, the Middle East and Russia.

Among those who toil Kot Momin's fertile lands is Ansar Ali. As a tenant on a farm, both he and his wife work around 16 hours a day, seven days a week, to make ends meet.

While Ali spends most of his time working on the farm and looking after the cattle, his wife works as a domestic help in the household of the landlord who employs them. The landlord has provided them a two-room brick house. Together, they are paid 3,000 rupees ($20, €18) per month, which is hardly sufficient for the family.

The only way for Ali to put food on the table is to regularly borrow extra money from the landlord. In times of desperation, like a medical emergency or other family obligations, the landlord lends him additional funds. Ansar can't read or write, so he just puts his thumb print on the accounts ledger maintained by the landlord.

Over the years, the family's debt has increased manifold, and Ali has no idea how he is ever going to repay it. "The deeper you get into the debt trap, the less hope there is you can ever get out of it," he told DW. "It's a life of slavery I will probably never get out of."

Sociologists describe the practice as the most prevalent form of modern-day slavery, as many sectors of the economy thrive on this crude form of human exploitation — mainly in the agriculture, brick-making and carpet-weaving sectors.

"The landlords are a powerful class," Rizwan Rafiq Minhas, a reporter and social activist in Kot Momin, told DW. "They control almost every aspect of the tenants' lives. They keep them under a close watch. Without their permission, the tenants are not allowed even to speak to people from outside of their estates," he added.

In 2007, under pressure to pay off some of his debt, Ali decided to take an extreme step: he sold one of his kidneys. He was helped by a network of organ traffickers that included local agents, doctors and medical staff in big cities like Lahore. After taking their cut, they gave him 100,000 rupees ($1,000, €901). The money helped reduce his debt burden — but not for long.

By 2016, the debt had re-accumulated. Ali said he was desperate to pay some of it to get the landlord off his back. This time it was his wife who offered to sell her kidney.

"There was no choice," explained Ali. "I can go on without a meal for days, but I can't see my children starve," he added.

After a temporary reprieve, the vicious cycle of poverty and debt for the family approached a full circle once again.

In theory, Ali can walk out of this exploitive arrangement. "But where would I go? They will get the police to arrest me and bring me back here."

He also has the option of selling his labor to another landlord in the area in exchange for a loan to pay off his current landlord. But that would be like re-mortgaging his family's servitude from one feudal lord to another, he said. Activists say that families caught in debt bondage often opt for it despite the unbearable verbal, physical or even sexual abuse.

In Ali's case, the landlord and his family aren't that bad. "They do get upset with us sometimes, but at least they don't beat us up or humiliate us publicly," the laborer said.

Debt bondage is a global phenomenon. According to the Global Slavery Study, an estimated 40.3 million people were living in modern slavery in 2016. The study, published by the International Labour Organisation (ILO) and the Walk Free Foundation, points out that a wide majority of these victims tend to be women and children.

Exploitation is particularly grave in parts of Africa as well as Afghanistan, Iran, North Korea, and Pakistan. And there are reasons for it. The GSI study shows that modern slavery trends are prevalent in countries ruled by repressive regimes and in conflict areas with hardly any rule of law, poor governance and social protection.

In Pakistan, major land reforms were attempted in the 1970s to limit the power of feudal lords and empower landless farmers. But as the country suffered repeated military coups, the reforms were reversed and failed to have an impact, points out Karamat Ali, executive director of the Pakistan Institute of Labour Education and Research (PILER).

"Military governments co-opt and patronized influential landlords to legitimize their own rule," Ali told DW. "But the civilian governments, including the present one, are no better. They are too weak to drive any reform as they also rely on the same fuedals for political support."

So, what is in store for people like Ansar Ali?

Experts say that so long as the country's civil-military elite lack the political commitment to introduce reforms, people like him are unlikely to see any change.

Having already sold his and his wife's kidneys to settle his debt, Ali feels he has run out of options.

"In a few years, when my son is old enough, I may have to sell one of his kidneys as well," he said.

Authorities in Pakistan say a Christian couple has been beaten to death for allegedly desecrating a copy of the Koran. Their bodies were subsequently burned in a brick kiln. (05.11.2014)