Five years after the death of Moammar Gadhafi, Libya's long-awaited railroad project still hasn't made any headway. The country's financial and political woes keep the project off the rails. Karlos Zurutuza reports. 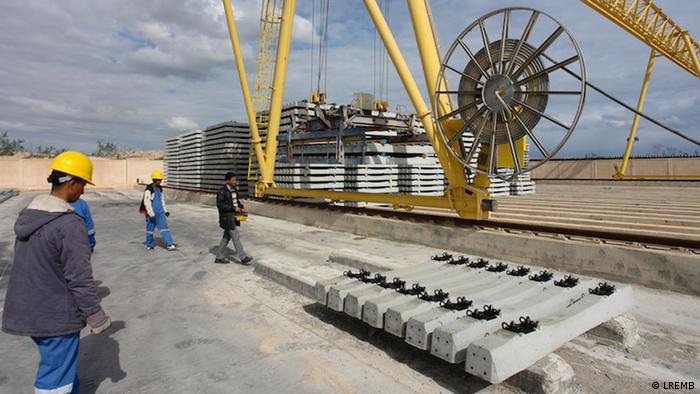 It needs a bit of imagination to spot the sites under the dust as this entire massive compound in southwest Tripoli looks derelict.

Between the rows of Chinese-built white barracks, there's also a slowly decaying mosque, a run-down theater and even a sporting area meant to cater for the needs of hundreds of workers of the Libyan Railroads Execution and Management Board headquarters (LREMB).

But there's not even a single railroad, as such, in Libya right now.

"We really want to work but construction activities ceased due to the war in 2011 and the whole project was suspended," the head of LREMB's Internal Relations and Media Department, Ali Saleh, told DW.

Saleh recalled 1998 as the year when the Libyan government announced its plans to open a new railway. The previous one - a network of over 1,500 kilometers (930 miles) - had been built during the Italian occupation of Libya and remained operational until 1965.

"Many train stations were demolished by [late Libyan leader Moammar] Gadhafi and rails stolen and sold as scrap, so the new project had to start from scratch," Saleh, a civil servant in his fifties, told DW. He's been here since 2003, when LREMB was launched.

It was not until 2008 though that contracts for a new railway were signed with international companies. 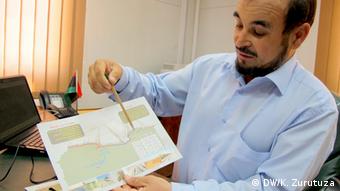 "The Chinese would build the section between the Tunisian border and Sirte - 450 kilometers east of Tripoli - and the Russians would continue all the way to the Egyptian border," explained Saleh over a corporative flyer showing the ambitious 3,176 km-long railway and pictures of modern locomotives.

A batch of American-made locomotives had already arrived before the war, and Saleh admitted he's worried about the maintenance of 17 of them, which have been stranded in Khoms - 115 kilometers west of Tripoli - since 2008. They arrived by ship and are now abandoned in warehouses.

"School groups would come regularly to visit the site until 2010," Saleh recalled. "It was just a six-kilometer round trip as the railway is only three kilometers long," he noted with a timid smile before offering an invite to visit the locomotive, just a few hundred meters away.

It takes a couple of minutes by the stranded four-wagon train until a man in plain clothes warns this reporter against taking pictures. Apparently, the corrugated iron barrack a few meters away hosts a military unit from Misrata - Libya's third city which is home to one of the country's strongest military forces. 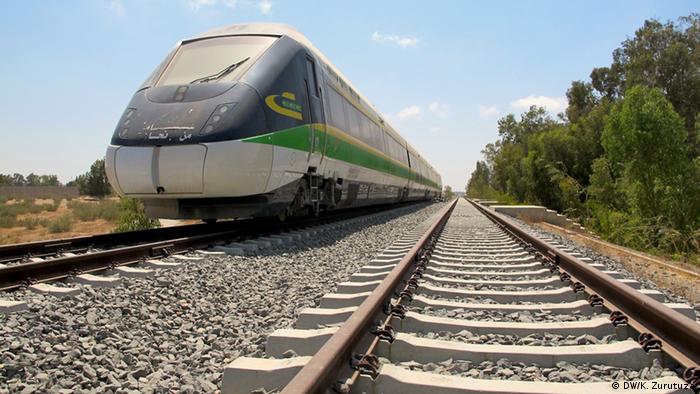 Clashes between Tripoli and Misrata forces are common currency in the country's capital. "We'd better go back to the office to avoid any trouble with them," blurted Saleh, looking visibly nervous.

Ambitious projects never to be completed?

"The period 2005 to 2012 spawned a great number of ambitious rail projects in the Maghreb and Middle East, few of which have ever really come to anything, e.g. the Hejaz Railway reopening or the Gulf Railway from Kuwait to Muscat [in Oman]," Nicky Gardner, a Berlin-based writer and expert on international rail travel, told DW.

Italian engineers also considered the possibility of building a "Trans-Saharan railway" that would link Mauritania with Egypt. Other than stretching along the Mediterranean coast, Gadhafi's plan included a secondary line which would run 800 km south to the city of Sebha. 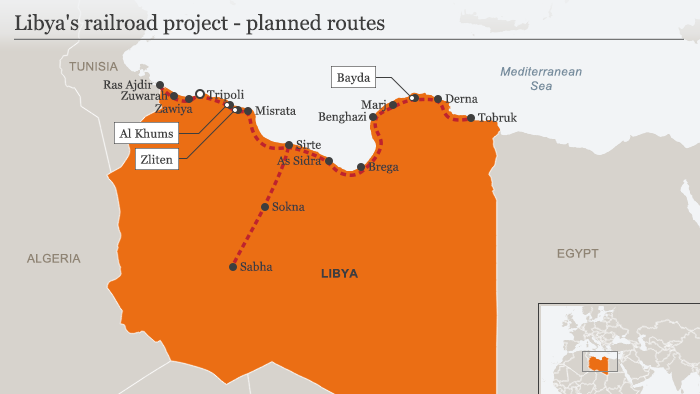 The strategic location of Sebha, Libya's main town in the country's inhospitable south, is a mandatory stopover for the scores of refugees determined to take the perilous sea journey to Europe. The International Organization for Migration (IOM) estimates 106,000 people have arrived in Italy so far this year, and that there are a further 275,000 migrants in Libya waiting to travel.

Engineer Khaire Agila is among those who don't give up hope easily. "We dream of a railway which not only connects Libyans, but also all the countries in the Maghreb," Agila told DW.

At the Ministry of Transport headquarters in downtown Tripoli, officials find no contradiction in sustaining the Libyan railway board despite the lack of a single running train. Most of them here work from 8 to 2 - and salaries keep coming monthly for the 800 workers.

They say they are keeping the place safe from thieves so they can continue operations one day.

"As soon as Libya resumes its oil exports, things will settle and the train [railway project] will finally depart. It's just a matter of time," Omar al Tergaman, director of Tripoli's Finance and Administration Department told DW. The government official also talked of an underground project to be built in Tripoli "when conditions allow." 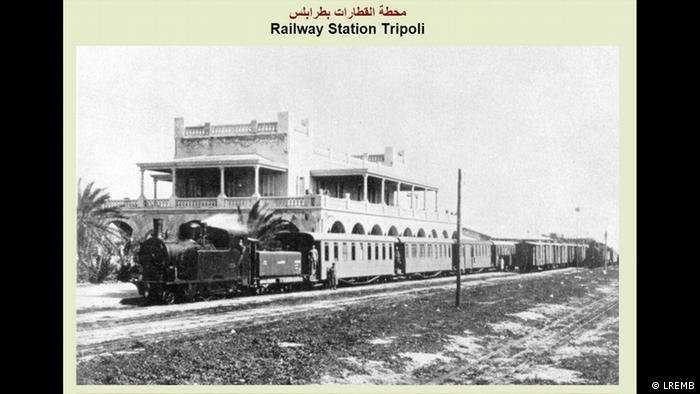 For the time being, the completion of such plans looks nowhere near. Libyan oil production has fallen from a post-Gadhafi high of 1.5 million in 2013, down to anything from 200,000 to 400,000 barrels per day. It's a factor which only adds to the dramatic plummeting of the Libyan currency since last year.

According to Tergaman, the political split in the country poses yet a bigger hurdle. Today there are three governments in Libya: one in the west, one in the east, and a third one backed by the UN which settled in Tripoli only last March. And that's not counting the myriad of local armed groups.

The fighting between the different sides has paved way for the arrival the self-proclaimed "Islamic State" (IS), which is currently under siege in its main stronghold of Sirte.

Tergaman admitted that conditions are far from ideal to build a railway. "I know it will happen one day, though," he added. "I just cannot tell when."