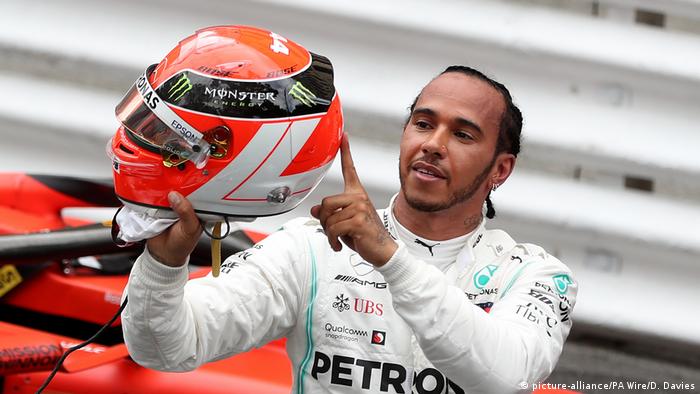 Lewis Hamilton picked up a fourth win of the 2019 season on Sunday to extend his lead in the driver's championship to 17 points, but the British driver was made to work for it.

The reigning champion started on pole and kept his advantage despite early chaos further back in the field that saw home favorite Charles Leclerc of Ferrari retire early.

Hamilton could frequently be heard questioning the wisdom of his team's strategy to leave him out on the track despite deteriorating tyres. He held off a late challenge from Max Verstappen, who missed out on the podium after being handed a five second penalty for a tete-a-tete with Valtteri Bottas when both men emerged from the pits. Bottas eventually finished third with Sebastian Vettel separating the two Mercedes drivers for the first time in 2019.

"That was definitely the hardest race I've had but nonetheless I really was fighting with the spirit of Niki [Lauda]," Hamilton said after the race.

"He's been such an influence in our team and I know he will be looking down and taking his hat off. I was trying to stay focused and make him proud. That's been the goal all week and we truly miss him."

Lauda, who died earlier in the week, was a three time F1 champion who had been heavily involved with Mercedes in recent years and was instrumental in signing Hamilton to the German team. Fans, drivers, team members and almost everyone else wore red hats, Lauda's trademark headgear, in memory of the Austrian.

Vettel, who had tire issues of his own, also paid tribute to Lauda, who also had a long association with Ferrari.

"When I saw them [Bottas and Verstappen] touching in the pit lane, I thought we might have a chance, but ultimately it's a good result for us. Today is about Niki really. He was an icon in the past and he will continue to be in the future."

The next race is in Canada on the weekend of June 7.

Lap 78 of 78 - Hamilton holds on to win from Verstappen who will finish in fourth with the time penalty. A great defensive drive from the Brit. Vettel will take second to break the Mercedes' 1-2 monopoly for the first team this seas, Bottas will be the other man on the podium.

Lap 77 of 78 - It's looking good for Hamilton now, after surviving that one. He doesn't even really need to cross first. But he'll want to.

Lap 76 of 78  Contact! Verstappen goes again and goes wheel to wheel with Hamilton, but the Englishman holds firm. Did the Red Bull driver go a touch early there?

Lap 76 of 78 - Hamilton struggling in the hairpins and tight turns but he's got the extra power in the straights, and that's proving critical.

Lap 74 of 78 - Verstappen has a real pop and nearly pays the price at the hairpin. He just manages to keep on track. Hamilton is closing on lapping Magnussen, which could cause him issues.

Lap 73 of 78 - It's got to be soon for Verstappen. He needs a five second lead over Hamilton to win this Grand Priy, with his penalty yet to be added. As it stands he'll finish second but not be on the podium.

Lap 71 of 78 - Verstappen makes a bit of a mess of the chicane and Vettel is interested for a moment but ultimately nothing doing.

Lap 70 of 78 - Verstappen has been told he's got a little more power to challenge Hamilton in the final stages. "Oh great," says the Englishman when he gets the news. Hamilton does well to hold off the first charge, but there'll be more.

Lap 67 of 78 - Still Hamilton from Verstappen, Vettel and Bottas but Verstappen is effectively down in foruth with his five second penalty. Is there a twist still to come?

Lap 63 of 78 - Gasly, in fifth, has a huge lead over Sainz so heads in to the pits in order to have a crack at the bonus point for the fastest lap.

Lap 60 of 78 - Hamilton is furious, saying the Mercedes' strategy requires a "miracle". It would surely be difficult to win if he pits now and Verstappen hasn't really looked like finding a spot to go at the leader. But the reigning champ obviously feels differently.

Lap 57 of 78  - Still no real sign of any real rain, which probably plays in to Hamilton's hands. But he's really not happy with his team orders to keep it safe and not start lapping other cars to keep Verstappen quiet.

Lap 53 of 78 - Verstappen is closing in on Hamilton again but Vettel is dropping back, perhaps with that overheating issue in mind. Very much a tactical battle now.

Lap 49 of 78 - The leaders starting to lap the backmarkers now, as Stroll holds up Bottas.

Lap 47 of 78 - A little lull at the moment, so a good time to catch up on who's holding the bonus point.

Lap 43 of 78 - Hamilton reiterates his displeasure at his tires. His team just want him to take the defensive line, with overtaking so difficult. But that's not Hamilton's nature. It seems Vettel's car is overheating a little, so he's also taking it fairly easy.

Lap 39 of 78 - Bit of argy-bargy between Stroll and Raikonnen, with the Canadian blocking out the veteran Finn. Looked a fairly reasonable defense from Stroll.

Lap 36 of 78 - Mercedes seem to think Hamilton's tires are going to hold up, and they also suggest Verstappen's are starting to wear. Vettel, still in third, has a chance here.

Lap 33 of 78 - Verstappen is right on Hamilton's tail, and has been for some time. When will he make his move?

Lap 28 of 78 - Verstappen is aware of his time penalty now and his team have told him the best way to absorb it would be to get past Hamilton. He won't need asking twice.

Lap 25 of 78 - Mercedes tell Hamilton that they expect some light rain, which is what the leader wants.

Lap 22 of 78 - Verstappen is handed a five second penalty for the incident on lap 12. Probably the best he could have hoped for.

Lap 21 of 78 - With all the incident further back, we've barely mentioned Hamilton. The Brit still leads but seems to be taking it easy, with some concerns over his tires. He's managing the race well so far. But he may want to switch to the hard tires. Vettel and Bottas seem to be going well on the hards but the rain could change it all.

Lap 19 of 78 - Looks like that's it for Leclerc whose home Grand Prix could be done already. He's in the pits and the car doesn't look like it's in any shape to re-emerge.

Lap 16 of 78 - Well, the normality didn't last long, we've got an incident at Ras Cas. Russell, Leclerc, Giovanazzi, Perez and Kubica, the backrunners, are forced to a standstill after a collision. This is not Leclerc's day.

Lap 15 of 78 - Leclerc is missing a large portion of his floor it seems. A long way back for him. Vettel has gone past Bottas in to third but the Mercedes driver probably won't pit again. The safety car has left the track now and we're back to some kind of normality.

Lap 13 of 78 - Bottas pits again on to a hard compound tire, he may have taken some damage there.

Lap 12 of 78 - Bottas and Verstappen touched wheels emerging from the pits and that looks likely to be called an unsafe release from the Red Bull man, who would recive a drive through penalty.

Lap 11 of 78 - Hamilton takes the opportunity to pit as do Bottas and Verstappen, and the yound Dutchman emerges alongside Bottas and edges ahead in to second. Track crew are furiously brushing debris away but it's all happening.

Lap 9 of 78 - Yep, definitely the man to watch. Leclerc tries a very similar move on Hulkenberg but just clips the barrier. It's not enough to spin the car and he manages to keep going but his tire is shredded. Big trouble here.

Lap 8 of 78 - Third time lucky for Leclerc, who spies the narrowest of gaps to pass Grosjean on the inside. You feel the Frenchman is the one to watch at this stage, no sign of the rain yet.

Lap 5 of 78 - Grosjean still holding off Leclerc, who look impatient to make up ground in his home race.

Lap 3 of 78 - Hamilton starting to open up a decent little lead already. There was some suggestion that Leclerc may face a penalty for cutting a corner at the start but it appears the young Frenchman is safe.

Lap 1 of of 78 - LIGHTS OUT! Hamilton gets away well, as does Verstappen, who has a little nibble at Bottas but can't get past the Mercedes man. Further back, there's contact between Raikonnen and Stroll (I think). Ricciardo moves up to sixth and Leclerc takes his first step back towards the points, moving up to 14th.

15:10 - The grid is starting to disperse a little as the driver's clamber in to their cockpits. The Mercedes team tell Hamilton to expect some rain.

15:07 - There are red hats as far as the eye can see in tribute to Lauda and his trademark headwear. Everyone from former drivers to team directors, fans and members of the media are joining in and a minute’s silence was observed a few moments ago. But attention is now starting to turn to today’s race. You feel Bottas’ best chance might be at the start but rain is forecast, which could make things a bit more interesting.

15:00 - Hello, and welcome to the sixth Grand Prix of the 2019 season. Once again we have Lewis Hamilton and Valtteri Bottas as the front of the grid as Mercedes aim to continune their perfect start to this season. The Brit leads his teammate by seven points but the pair already have an enormous lead over Max Verstappen, who sits third in the driver's standings.

But today is also about looking back, with a series of tributes to Niki Lauda, who passed away earlier this week, having already taken place and more to come. The picture gallery below should give you a decent overview of a remarkable career before we begin.