Lewis Hamilton capitalized on the retirement of his Mercedes teammate Valtteri Bottas to win the Eifel Grand Prix in Germany. The victory is the 91st of Hamilton's career, equaling Michael Schumacher's record. 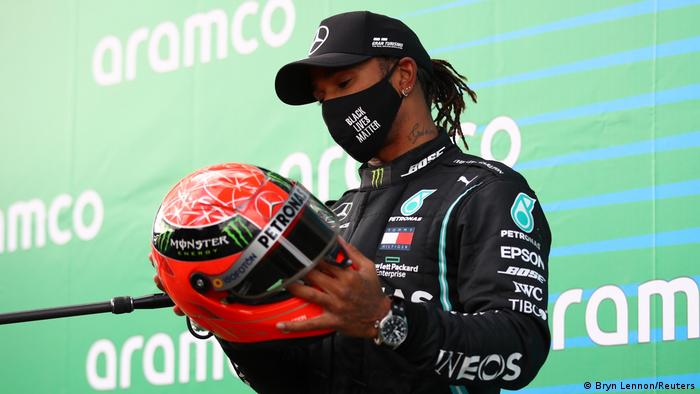 Lewis Hamilton equalled Michael Schumacher's all-time record of 91 Formula One wins on Sunday with an Eifel Grand Prix victory that accelerated the Mercedes driver's charge towards a seventh world title.

While the Briton triumphed at the Nüburgring, the German circuit where Ferrari great Schumacher won five times, team mate Valtteri Bottas suffered a huge hit to his title hopes with a first retirement of the season.

Hamilton, celebrating his seventh win of the season, is now 69 points clear of the Finn in the standings with six rounds remaining.

Red Bull's Max Versteppen finished second, and took a bonus point for fastest lap, with Australian Daniel Ricciardo third for Renault in his first podium since 2018 when he was at Red Bull.

"It's such an honour," said Hamilton before stepping up onto the podium at the circuit closest to Schumacher's boyhood home in Kerpen. "I don't even know what to say.

"When you grow up watching someone you generally idolise them, you know, really just in terms of the quality of the driver they are but what they are able to continuously do, year on year and race on race and week on week," added the Briton.

"Seeing his dominance for so long, I don't think anyone and especially me didn't imagine I'd be anywhere near Michael in terms of records. So it's an incredible honour and it's going to take some time to get used to it."

Sergio Perez (Racing Point) — He may have just missed out on a podium place, but he produced a great drive to climb from ninth on the starting grid to fourth.

Racing Point — It wasn't just Perez who had a great day in a pink car. Nico Hülkenberg, driving in front of his home fans, gained 12 places to finish eighth. Combined, the Racing Point drivers gained 17 places from their qualifying positions.

Lap 60/60 — LEWIS HAMILTON WINS THE EIFEL GRAND PRIX! The world champion wins his 91st Grand Prix, equalling the record set by Michael Schumacher. And Hamilton does it in Germany, the homeland of the great Schumacher. Verstappen takes second after another solid drive and another Red Bull, Ricciardo, takes third.

Lap 55/60 — A new fastest lap for Hamilton, who has built a three-second gap between him and Verstappen in a little over five laps. Barring something extraordinary, Hamilton is about to win at the Nürburgring and make it a record-equaling 91 career wins.

Lap 50/60 — Into the final ten laps and Hamilton's lead has been wiped out since the safety car just departed. He will spend the last laps trying to increase the distance between him and Max Verstappen's Red Bull. In the battle for third, Ricciardo is having to work hard to fend off Perez.

Lap 45/60 — Norris is out! The Briton was on course for another podium finish but he has encountered a technical problem and is forced to pull off the track. Such a shame for the McLaren driver, who slumps into a plastic lounger at the side of the track and just sits there. That means Ricciardo goes third, with Perez hot on his heels — the safety car is back out.

Lap 40/60 — Hamilton is now eight seconds clear of Verstappen and that gap now seems too big for Verstappen to close.

Lap 35/60 — A ding dong battle between Perez and Leclerc ends with the former moving into fourth place and the latter limping into the pits. Hasn't been a great day for the young man from Monaco.

Lap 30/60 — We're halfway through the race and Hamilton is on course for his 91st Grand Prix victory, which would bring him level with the great Michael Schumacher. But there are still 30 laps to go and Verstappen isn't going to give the Briton and easy ride. The Red Bull is 5 seconds behind Hamilton, but the leader has just recorded a new fastest lap.

Lap 25/60 — Bottas is out! The polesitter loses power and sinks down the pecking order until he is told to drag himself into the pits and retire. A tough break for Bottas.

Lap 20/60 — Hamilton takes the lead! Bottas locks up into turn 1 and Hamilton seizes the opportunity. Bottas then pits and returns to the track on the medium tyres, just behind Ricciardo. Meanwhile, Raikkonen shunts Russell, which sends the Williams driver into the air. The virtual safety car is deployed, with the collision under investigation. A penalty would appear to be on the way for Raikkonen.

Lap 15/60 — Ricciardo takes fourth from Leclerc! He overtakes the Ferrari on turn 1, and then has enough pace to consolidate it through turn 2. That had been coming — now the Australian needs to chip away at the 18 second gap between him and the Red Bull in third. Not an easy task.

Lap 10/60 — With news that a rain shower is on the way, Verstappen clocks a fastest lap of 1m 31.938, faster than Hamilton's previous fastest lap. The Red Bull is the man with the pace out there at the moment.

Lap 5/60 — Verstappen is keeping pace with the two Mercedes at the moment, while Leclerc has dropped four seconds, allowing Renault's Ricciardo to challenge the Ferrari for fourth.

Lap 1/60 — GO GO GO! Lights out and Bottas holds the lead through the first corner, but Hamilton has a good go at him and for a very brief moment had the lead. The two Mercedes go wheel to wheel, but Hamilton relents and Bottas keeps the lead on the second turn. Max Verstappen had a cheeky attempt to dart into second, but Hamilton quickly shuts the door.

Valtteri Bottas claimed an impressive pole position for the Eifel Formula One Grand Prix ahead of Mercedes teammate and championship leader Lewis Hamilton on Saturday.

German fans saw Sebastian Vettel have to settle for 11th while Nico Hulkenberg will be last on Sunday's grid for Racing Point after standing in at short notice for Lance Stroll.

Bottas topped practice and was also on form in qualifying, storming to his third pole of the season and 14th overall by clocking 1 minute 25.269 seconds in cold temperatures.

Hamilton was .256 seconds adrift and Red Bull's Max Verstappen trailed by .293 in third as he failed to end Mercedes' perfect run of season poles.

"It's such a nice feeling when you get it on the last lap, with the last chance," Bottas said. "The last lap in Q3 was spot on, just what I needed. It's been pretty tricky with short practice and these conditions
getting the tyres in the sweet spot."

"It's such a nice feeling when you get it on the last lap, with the last chance" — Valtteri Bottas

F1 returns to the Nurburgring this weekend after a six-year absence. The 5.148-kilometres course is one of the signature tracks on the calendar, but Hockenheim has been the preferred circuit for the German Grand Prix in recent years. With seven left turns and 10 right-hand turns, the Nurburgring has just eight braking zones — equating to 63% full-throttle. The several high-speed corners often makes for an enjoyable race.

As Lewis Hamilton seeks to equal Michael Schumacher's all-time record of 91 wins in F1 in Sunday's Eifel Grand Prix at the Nürburgring, Michael's son Mick was hoping to take the wheel too. Rain scuppered that idea.

Verstappen holds off Sainz to win Canada GP as Hamilton returns to podium 19.06.2022

Max Verstappen won in Canada for the first time on Sunday from pole position to extend his lead in the Formula One championship. Lewis Hamilton got his second podium in a difficult season.