It's not just Germans who know the "little yellow books" of classic literature. From South Africa to the US, Reclam publisher's paperbacks are unmistakable symbols of German culture — and they now have their own museum.

Former Libyan dictator Moammar Gadhafi had his Green Book. China's Chairman Mao Zedong was famous for his Little Red Book. In Germany, however, it is little yellow books that you will find almost anywhere: on bookshelves, on public transport, in classrooms and cafes.

They're widely known as "Reclam Hefte" in German-speaking countries, which translates as "Reclam booklets," and they are all part of the publisher's "Universal Library" ("Universal-Bibliothek") series.

With this canary-colored collection, the Reclam publishing house has been at the forefront of printing and distributing paperback books at discount prizes for just over 150 years. Now, a museum dedicated to Reclam is opening its doors in the city where the publisher was first based, Leipzig.

Hans-Jochen Marquart is chairman of the foundation that funds the museum. The thousands of books on display all belong to his private collection of Reclam treasures.

"(The museum) is designed to first provide an overview of the history of Reclam, stretching from before its foundation to the present. We present lesser known editions alongside the yellow books. Reclam has actually produced books to fit all budgets and address all preferences, including editions bound in leather and half leather, linen, vellum and even water-repellent vellum," Marquart told DW ahead of the museum's opening day on October 24. Education for the masses

There is a lot to learn about the history of Reclam at the museum: The publisher was established in 1828, but it really started building its business empire in 1867. Previous copyright reform had stipulated that many classic works of German literature would be protected for 30 years following the death of the respective author. The retroactive starting date was 1837, meaning that in 1867, Reclam suddenly could make cheap copies of beloved works by literary greats including Johann Wolfgang von Goethe, Friedrich Schiller, Theodor Storm or Gotthold Ephraim Lessing.

In ensuing years, this "Universal Library" series expanded. It began encompassing works translated from other languages and incorporating books by English and French authors, as well as works of antiquity. The little yellow books were soon being celebrated across Europe as a means to educate people of all classes.

"Anton Philipp Reclam and his son Hans Heinrich, cleverly designed the series as a library for edification affordable to people from a broad class range," Reclam states. "Widely known for its favorable prices, [Reclam] is not only one of the largest paperback series on the German market, with more than 3,000 backlist titles, but also the oldest in Germany."

Read more: How German literature came into the world and where it stands today Hans-Jochen Marquart adds that Reclam empowered people to feel they could approach high literature without inhibitions or reservations: "Being confronted with Goethe or Tolstoy in a deluxe hardback edition is quite a different thing from getting to know these authors in a Reclam book," he told DW. "There is nothing comparable to this anywhere in the world."

Marquart closely followed the evolution of the publisher during the course of his lifetime to date, as Reclam was split into two independent companies after the end of World War II — one private company based in West Germany and another state-owned business in East Germany.

Marquart's father was the director of the East German publisher, adding a personal dimension to why he collected all but 23 of the 6,000 books ever published by Reclam and later campaigned for the museum.

"I don't believe that anyone has a more complete collection than I do," Marquart said, adding that he started his collection at age 14.

Success around the globe 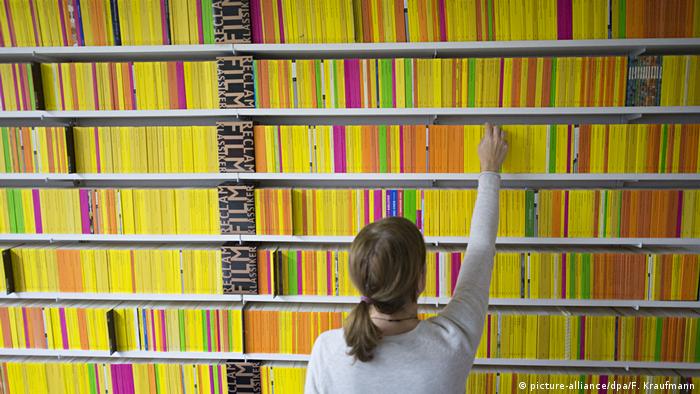 You can spot a single little yellow book from far away, but they are perhaps most impressive all together on bookshelves

However, Reclam is also relevant beyond Germany. The little yellow books have become a quintessentially German form of literary culture can be recognized anywhere in the world.

You could be sitting on a beach in Spain, hiking on a mountain in France or commuting on public transportation in a major city in the US: A pocket-sized Reclam book in anyone's hands will immediately conjure up associations to literature.

Regina Müller, a former bookseller living in Cape Town, South Africa, says that anyone interested in German-language literature will know and appreciate Reclam: "Everyone likes the low pricing and the wide choice of books that Reclam is known for. You can read classics for little money, not only in German," she told DW. "I think Reclam is a quintessentially German brand — much like Tempo-brand tissues or Uhu-brand glue."

Reclam's global popularity is also felt in the United States: Sarah Richards, a high school English teacher based in Atlanta, Georgia, remembers that she was first introduced to Reclam as a German student in college.

"I loved the books because they were inexpensive and, best of all, light and easy to carry. They also somehow seem more friendly to write notes in than many other types of books. They always make me smile when I see them in bookstores in Germany or Austria," Richards told DW.

Richards hopes to be able to use the little yellow books on a more day-to-day basis in the future. "I currently teach high school German and we do not use them, but only because the level is too high. At some point I would love to get to teach with them."

On November 10, 1867, German classics by the likes of Goethe and Schiller became part of the public domain. Published as part of Reclam's "Universal Library," the books offered world literature at an affordable price. (10.11.2017)

10 reasons why Reclam Publishers' little yellow books are so popular

Widely available, slim and trim, and affordable, too: Reclam paperbacks have been around for more than 150 years, filling the shelves of German bookshops and libraries. Here's why Germany loves the small yellow books. (10.11.2017)