On November 10, 1867, German classics by the likes of Goethe and Schiller became part of the public domain. Published as part of Reclam's "Universal Library," the books offered world literature at an affordable price.

The first book that rolled off the presses on November 10, 1867 as part of Reclam Publishers' Universal-Bibliothek ("UB," or Universal Library) was Johann Wolfgang von Goethe's "Faust" in two parts. It was sold for two "Neugroschen" (20 cents).

Now celebrating its 150 anniversary, the UB is the oldest running book series on the German market. Since their creation, pupils, students and other avid readers have bought the little paperbacks. They can be found in virtually every German household.

They were not originally published with their famous yellow covers, but they were an immediate sensation. The Leipziger Nachrichten newspaper exclaimed on November 11, 1867, that these editions of classic works "with their nice print quality and handsome design combined with their inexpensive price surpass anything a country has brought out on the book market until now."

A library for the edification of all levels of society

Nowadays, there is hardly a German student who isn't familiar with the little yellow books. When Goethe's "Faust" or Gotthold Ephraim Lessing's "Nathan the Wise" appears on the curriculum, teachers tend to recommend to students to purchase the Reclam paperbacks. They are now not as inexpensive as they were at the start, but they are still quite affordable.

The Universal-Bibliothek was introduced at the publisher's headquarters in Leipzig shortly after a regulation passed by the the German Federal Assembly stipulated that works by all German authors would be protected by copyright laws for 30 years following the death of the author. Nowadays, that time period spans 70 years.

That regulation of 1867 made some of the most classic works of German literature part of public domain, and thus publishable for the Reclam-UB. "Its founders, Anton Philipp Reclam and his son Hans Heinrich, cleverly designed the series as a library for edification affordable to people from a broad class range," the publishing house announced. The series offered "classics of German and European literature, as well as those of the Antiquity. It published works by modern Scandinavian authors, as well as those of philosophy and opera libretti. Popular literature was not ignored either."

In times of change

The Universal-Bibliothek's 50th anniversary landed in the heat of World War I, in 1917. Responding to a request by a soldier, Reclam Publishers created a "portable field library" that included 100 UB titles for soldiers on the front lines.

Another historic birthday, its 75th, likewise landed during World War II. The publishing house noted that its work had to "adhere to the constraints and restrictions of Nazi cultural policies." Jewish and "politically undesirable" authors were to be banned from the Universal-Bibliothek.

Reclam had also published the "Deutsche Rundschau" paper until September 1939. It was considered the publishing house's most daring attempt to speak out against National Socialism. 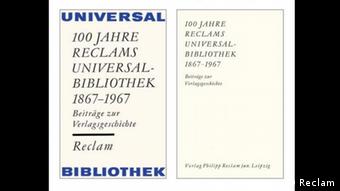 While Germany was divided, Reclam Publishing was based in both the East and the West: partially expropriated in the eastern city of Leipzig, with a base in the western city of Stuttgart as of 1947. Later, the publishing house moved into a new building and printing factory in Ditzingen, a small village near Stuttgart. In 1992, following German reunification, the publishing house in Leipzig was reprivatized and renamed the "Reclam-Bibliothek Leipzig."

Singular around the world

These days, there are some 3,500 titles available in the Universal-Bibliothek, with total sales of 0.6 billion copies. Friedrich Schiller's "Wilhelm Tell" has been the number one best-seller of the top 10 since 1948, standing at sales of 5.4 million copies.

But anyone who has ever been bored during German class has tended to doodle on those little yellow paperback books —  with a museum in Cologne even showing many of the "artworks" during an exhibition in 1999.

10 reasons why Reclam Publishers' little yellow books are so popular

A widely available, small, thin, affordable paperback, Reclam booklets have been around for 150 years. Here's why Germany loves the small, thin yellow books. (10.11.2017)