Lego to swap plastic bags in box sets for paper ones

The switch is part of a $400 million sustainability effort by the Danish toymaker. Lego also said it aims to expand the use of bio-bricks and to design products that would teach kids about sustainability through play. 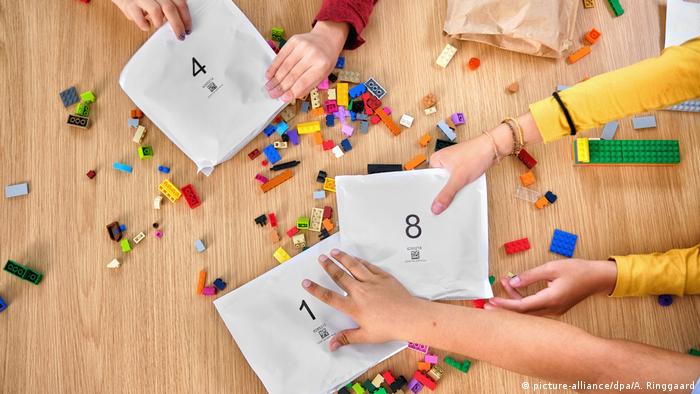 Lego said on Tuesday that it plans to stop using plastic bags inside of box sets and replace them with paper ones.

The Danish company said it would start making the switch next year and aimed to completely phase out plastic bags by 2025. It said children liked the paper alternative "as they were environmentally friendly and easy to open."

The plastic bags are used in box sets to hold loose bricks.

“We have received many letters from children about the environment asking us to remove single-use plastic packaging," Lego CEO Niels B Christiansen said in the statement. "We have been exploring alternatives for some time and the passion and ideas from children inspired us to begin to make the change."

The change is part of what Lego dubs a $400 million (roughly €340 million) initiative over the next three years to increase sustainability efforts. Lego, whose bricks themselves are primarily made of plastic, said it expects its manufacturing operations to be carbon neutral by 2022.

The toymaker said it was already looking to expand the use of so-called "bio-bricks" made of sugar cane, which currently makes up 2% of its pieces. It said it was also researching other alternative materials to plastic and designing toys that would teach kids "sustainability through play."

"It’s critical we take urgent action now to care for the planet and future generations," Christiansen said. "As a company who looks to children as our role models, we are inspired by the millions of kids who have called for more urgent action on climate change."

Other companies to have made similar pledges in recent years to try to reduce their use of plastics include Ikea, Mattel, Walmart, Adidas, Subway and Starbucks, and several supermarket chains.

In 2016, DW reporter Tamsin Walker made it her New Year's resolution to eradicate plastic packaging from her life. After an initial shock to the system, she got used to it. But did she stick to it?

A Chinese toymaker was selling counterfeit Lego across the country for a tenth of their market price. A police raid has uncovered more than 600,000 completed pieces intended for sale.

Shweta Chari: The right to play