Legal pyrotechnics: Hamburg given green light to use 'legal pyro' for the first time

German football fans are well-known for eye-catching in-stadium displays which often involve illegal pyrotechnics. Now, for the first time, the German FA has granted permission for a 'legal' pyro show. In a first for German football, when Hamburg face Karlsruhe in Bundesliga 2 on Saturday, home supporters will be allowed to use pyrotechnics legally and in a controlled environment.

The German Football Association (DFB)'s "Prevention, Security and Football Culture" commission has officially given HSV permission to set off ten smoke bombs behind the goal at the Volksparkstadion in the area between the terrace and the pitch as the teams walk out.

The one-off pyrotechnic show will be carried out by selected supporters but will be supervised throughout by a pyrotechnics expert. The fire brigade will also be on hand with fire extinguishers and buckets of sand.

The experiment is a first in professional football in Germany and comes at a time when supporters and authorities have never been more deeply entrenched in the debate over pyrotechnics. Last season, Bundesliga clubs were ordered to pay a combined total of €1,056,525 ($1,166,926) in fines for their fans' use of flares, smoke bombs and fireworks.

- Read more: Politics, protests and pyro: The Bundesliga off the pitch in 2020 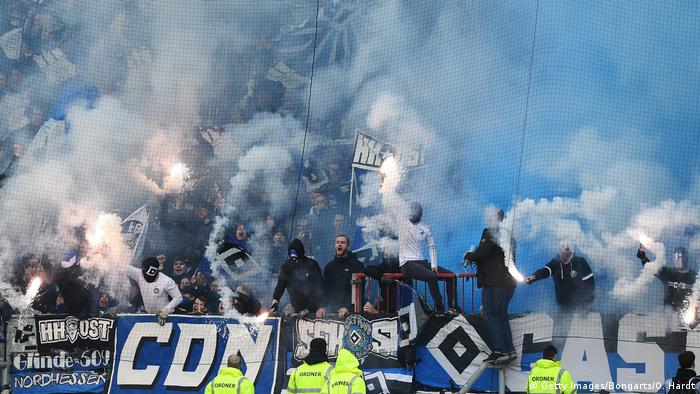 HSV fans made their presence felt away at local rivals St. Pauli.

Despite the financial cost, HSV chairman Bernd Hoffmann has long been an advocate of finding a workable solution for supporters, who consider pyrotechnics an integral part of their fan culture, and for the authorities, who maintain that flares are illegal and dangerous. "It cannot be that something which is commonplace at every music concert is then not allowed at football," said the 56-year-old at HSV's most recent AGM.

Flares, known as Bengalos in German, burn at up to 2,500 degrees Celsius (4,532 degrees Fahrenheit), but injuries are rare. Indeed, police figures regularly show that more people are hurt in football stadiums by officers' use of pepper spray than by pyrotechnics.

In summer 2019, Bundesliga side Werder Bremen tested so-called "cold pyro," developed in Denmark, in the presence of security teams and fire service. The tests failed after it was found that the flares emitted noxious gasses and still burned at between 300 and 500 degrees Celsius, depending on color.

Saturday's test in Hamburg, which could yet be called off if weather conditions are deemed unsuitable, will use regular smoke bombs and will reportedly involve members of HSV's active fan scene. The DFB has also signalled that further exemptions could be authorized "for offical firework shows and similar events which are carried out by specialists."

However, it remains to be seen whether "legal" pyrotechnics, whether "cold" or "controlled," will be accepted by German fans in the long-term.