Conservative German politicians have condemned the publication of photos of 54 police officers accused of brutality. The police previously provoked anger by releasing photos of "black block" rioters at the G20 summit. 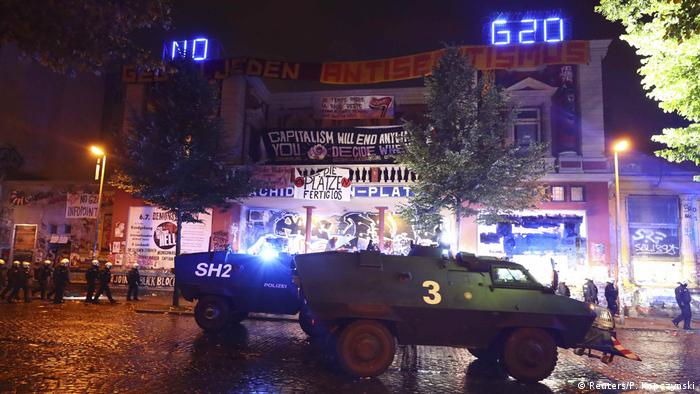 Christian Democratic Union (CDU) interior policy spokesman Armin Schuster has described the release of photos of 54 police officers who took part in the clearing of a leftist community building on Rigaer Strasse in Berlin as "the beginning of terror."

Publishing the photos on a far-left website, the activists wrote, "We welcome any indication of where they live or can be found. Apart from participating in the clearance, they can without hesitation be made responsible for the violence of the three-week siege."

Conservative politician Schuster told public broadcaster ZDF on Tuesday morning that the state could not accept the "hunt after police officers."

The publication of the photos was seen as a direct retaliation to the Hamburg police department's publication on Monday of extended videos showing rioting during the G20 protests in Hamburg in July — along with 104 photos of alleged rioters — as part of a public call for information.

Police said on Tuesday that the action had already shown signs of success, with more than 50 calls from the public offering information, and one man giving himself up as a looter. 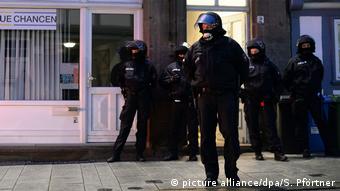 "A real hysteria is developing. This is exactly what I said would happen," she told DW.

"Of course one has to make clear that like can't just be equated to like. I was there as a parliamentary observer — and this is a distraction from the violence that stemmed from both sides."

Some newspapers pointed out that the last time German police released pictures of suspected left-wing extremists was during the 1970s, when images of the Red Army Faction terrorist group were spread in the media. In general, the police only put out pictures of suspects in cases of serious crimes like murder, assault, or armed robbery — and they are only supposed to do so when all other attempts at identification have failed.

Jonathan Burmeister, a lawyer representing a handful of people convicted for crimes committed during the G20 protests, described the police's action as a "smear campaign."

"If you look at the videos that were released — they consist almost 100 percent of video material that is not useful for identification purposes," he told DW. "They are just the most sensational video clips cut together to show how badly the police were treated."

"They could have just released the photos and be done with it — instead they release these sensational videos that don't serve any use," he said. "Sometimes there are videos that go for minutes where everyone is wearing masks — it's impossible for anyone to be identified." In response to a request for comment on the accusation, the Hamburg police would only say that the public call for information had been approved by both state prosecutors and the court, and was a legitimate tool. 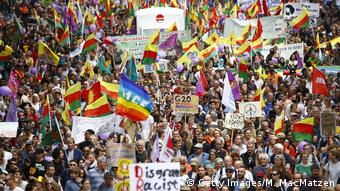 Violence marred some of the demonstrations against the G20 in Hamburg

Jelpke agreed. "Even if the police point out that they have a court order, I still think it's completely disproportionate — it's like mass screening," she said. "Both sides are spurring each other on, which we really don't need. As far as Hamburg is concerned, if you want a thorough investigation then you have to investigate both sides."

There have already been several convictions for property damage and breach of the peace as a result of the G20 protests — though no charges against police officers. Some of the sentences have been criticized as excessive — one Polish traveler arrested in Hamburg was sentenced to six months in prison because he was found carrying fireworks.

Jelpke says she saw police turning to "water cannon and batons" as soon as any small demo began. "Normally you're supposed to call for the assembly to disperse at least three times," she said.

Burmeister also said there was plenty of evidence of police violence that wasn't being investigated. He said the leftist demo called "Welcome To Hell" — from which most of the violence stemmed — was deliberately obstructed by the police before it even began. "Everyone in the police and among the politicians knew that this demo was not to be allowed to march," Burmeister said. "They didn't want to allow the right to demonstrate in that instance. Of course there were rioters, and that's terrible, but there was police brutality too, and that's also terrible — and CDU politicians always just say one side is bad."

A special commission has spent the past six months combing through images of rioters at the Hamburg G20. Police have now carried out raids across Germany. (05.12.2017)

A Polish hitchhiker has become the first person to be charged with any offense related to the G20 riots in Hamburg - for carrying marbles and firecrackers. However, he was not even at a demo when he was arrested. (09.08.2017)