Lebanese authorities have seized a large consignment of weapons, apparently from Libya, that was thought to be destined for rebel forces in Syria. The ship's owner said he was unaware of the contents on board. 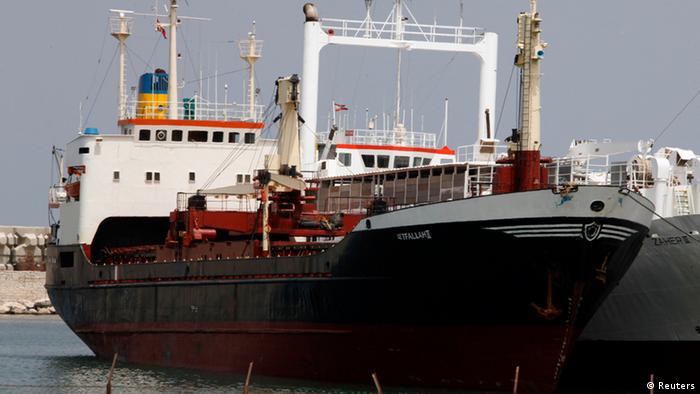 Officials in Lebanon said on Saturday that they had seized a large consignment of Libyan weapons on board a ship, including heavy machineguns, artillery shells, rocket-propelled grenades and other explosives. Eleven crew members were detained. The ship is being held at the port of Selaata, north of the capital Beirut.

The Lebanese army did not say where the Lutfallah II vessel was heading, but the ship's owner Mohammad Khafaji told Reuters news agency that it was set to dock in the northern Lebanese city of Tripoli.

The mainly Sunni-Muslim city has seen several major protests in support of the Syrian rebels.

The government in Damascus had often claimed that weapons were being smuggled to the opposition over the Lebanese border.

The Lebanese army said the Lutfallah II carried a Sierra Leone flag and had three containers on board filled with "large amounts of weapons and ammunition."

The military released pictures of the crates, one of which was marked "Tripoli/Benghazi SPLAJ," referring to the formal name for Libya during the rule of Moammar Gadhafi: the Socialist People's Libyan Arab Jamahiriya.

Another was stamped Misrata, one of the strongholds of Libyan rebels in last year's civil war.

Ship owner Mohammad Khafaji told Reuters that he was told the craft was carrying engine oil and that he was unaware that weapons were on board.

"The law doesn't allow me to open and inspect the containers," he said by telephone from Egypt. He said he had been asked to transport 12 containers of "general cargo" from Libya to Lebanon, and that the ship eventually departed with just three containers on board after a two-day delay.

Libya's new government has in the past said that it does not send weapons to Syria, but that it does strongly support Syrians "who are raising their voice asking for freedom."

In other developments, Syrian media said Damascus had stopped a "terrorist attempt" to enter the country by boat from the Mediterranean Sea in the western Lakatia province on Saturday. According to the SANA report, there were deaths on both sides.

There were further reports on Saturday, both from activist groups and on Syrian state media, of further bloodshed in the restless country, though both sides technically signed up to a Kofi Annan-brokered peace plan on April 12.

Annan is serving as a UN-Arab League special envoy to Syria. His new chief monitor - who will lead a growing team of about 15 UN observers deployed as part of his six-point peace plan - Major General Robert Mood of Norway, was set to arrive in Damascus on Sunday.

UN Secretary General Ban Ki-moon has demanded that the Syrian government immediately comply with the terms of Annan's plan. The UN estimates that at least 9,000 people have been killed in over a year of unrest in Syria.