Lavrov: No evidence of Russian interference in US presidential elections | News | DW | 31.10.2017

Lavrov: No evidence of Russian interference in US presidential elections

Russian Foreign Minister Sergey Lavrov has denied evidence exists of any Russian interference in the US elections in 2016. The statement came after charges were filed in the US against former aides of the Trump campaign. 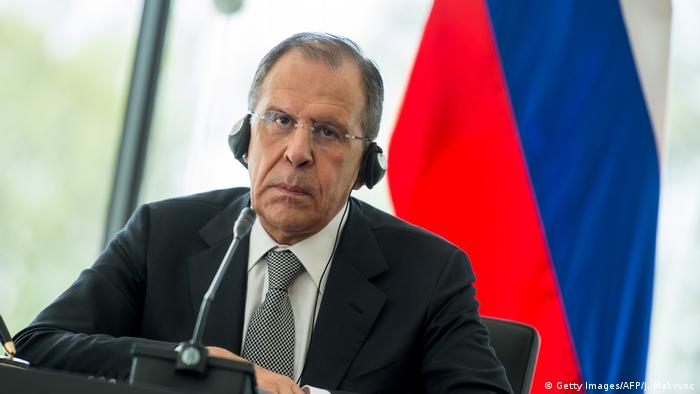 Speaking to a meeting of business leaders in Moscow, Lavrov said: "Without any evidence, as you know, we are being accused of interfering in elections not only in the US but also in European states."

The United States has been using a "pretext of a fight against a Russian threat in Washington" to muscle in on Russian business interests out of Europe. Washington was working to weaken Russia's position in the arms export and energy sectors to the benefit of the US, Lavrov added, according to Interfax news agency.

Later on Tuesday, Lavrov said Washington should investigate "the Ukrainian trace," the RIA news agencyreported. Kiev "has information" about the 2016 US presidential election," Lavrov told a news briefing.

On Monday a man accused of plotting to kill Russian President Vladimir Putin was injured and his wife killed in an attack outside Kyiv.

Lavrov's comments come after a special prosecutor's probe into Russia's possible meddling in the 2016 US presidential election and potential ties between the Trump campaign team and the Kremlin enters new territory. Trump's former campaign chairman Paul Manafort and his business associate Richard Gates were charged Tuesday with conspiracy and money laundering in connection with lobbying work for a pro-Russian political party in Ukraine.

The charges are the first from an investigation into Russian interference in the 2016 US presidential election and are not directly tied to the Trump himself.

Meanwhile, a former foreign policy adviser for Trump's campaign, George Papadopoulos, pleaded guilty also on Tuesday to lying to the FBI about his contacts with Russia.

The White House has denied collusion with Russia for several months, although court documents released on Monday reveal new evidence emerged of a plot by Papadopoulos to arrange a meeting with Russian President Vladimir Putin on behalf of the future US president.

It is the clearest evidence so far of a Trump campaign official's attempts to work with the Kremlin emerged in an indictment brought by Robert Mueller, the special counsel.

A document now in the hands of the FBI investigators shows that in the spring and summer of 2016, Papadopolous sought to forge ties to Kremlin officials, later misled the FBI and tried to cover it up.

Trump later said Papadopoulos, "the low level volunteer" has "proven to be a liar."

"Few people knew the young, low level volunteer named George, who has already proven to be a liar," Trump said.

Lavrov, meanwhile, told reporters later on Tuesday that he "does not see anything illegal" in the interaction [with Papadopoulos].

The figure offers the most detailed public accounting to date of the scale of a Russian disruption campaign via social media sites and online platforms.

Congress has summoned executives from Facebook, Twitter and Google to testify as lawmakers pursue multiple investigations of Russia's influence campaign.

US intelligence agencies described the organization as a network of pro-Russian trolls likely financed by a Putin ally, whom intelligence officials believe directed the election interference effort.

Putin has repeatedly denied interfering in the American presidential election or other votes in foreign countries, but admitted that "patriotic" Russian hackers may have been involved.

"Recently, there was an allegation that Moscow decided what minister to appoint in South Africa," Lavrov said. "In general, there is no limit to fantasy."

A report in the UK newspaper, The Sunday Times, suggested that South African President Jacob Zuma's recent cabinet reshuffle had been under Russian pressure to move David Mahlobo from state security to energy and Bongani Bongo in the opposite direction.

Mahlobo's appointment heightened speculation that Zuma wants to push through a nuclear deal with Russia before his term ends in 2019. Putin's team told Zuma to speed up and conclude the multi-billion-dollar deal and only a few hours after that gathering the latest cabinet reshuffle took place, the paper suggested.

US President Donald Trump says he had an "absolute right" to share intelligence with Russia. However, Moscow-based media contradict reports that Trump revealed classified information to Kremlin emissaries at all. (16.05.2017)

The scandal surrounding the meeting of Donald Trump Jr and a Russian lawyer is "making a mountain out of a molehill," said Russian Foreign Minister Sergey Lavrov. He denied knowing of the meeting before the news broke. (12.07.2017)