Laos: Controversial dams on the Mekong | Environment | All topics from climate change to conservation | DW | 25.12.2014

Laos: Controversial dams on the Mekong

Cash strapped, landlocked Laos plans to turn itself into the "battery of Southeast Asia" by transforming its plentiful rivers with hydropower projects. But two new dams on the storied Mekong River have many concerned. 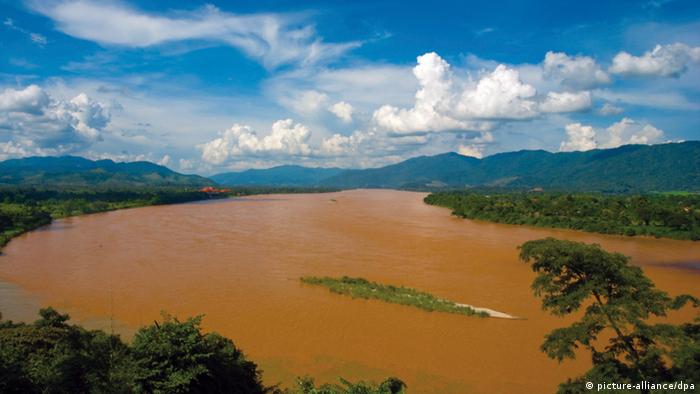 There aren't many places left in Southeast Asia where there aren't many tourists. But the part of Southern Laos on the Mekong River called Si Phan Don, or the Four Thousand islands, comes pretty close. At 9:00 a.m., the river below the fabled Khone Falls is still peaceful; just a few fishermen casting nets and me, in my boat with my guide, looking for dolphins. Yes, dolphins.

Suddenly, my guide points. "There!" About 50 meters dead ahead are three, possibly four Irrawaddy dolphins playfully gliding through the water. The dolphins are native to the Mekong and to Myanmar's Irrawaddy River, which gives them their name.

But environmentalists worry the dolphins here may soon be gone if Laos goes ahead with its plans to construct the Don Sahong Dam on one of the channels of the Mekong just a few hundred meters upriver.

"The Don Sahong dam is a big threat to the pool underneath the dam site," says Amy Trandem, Southeast Asia project director for International Rivers, an advocacy group. "By changing the hydrology and fisheries and sediment, the dam will have a large impact on dolphins, which are very sensitive to change. And most likely, they'll disappear for good." 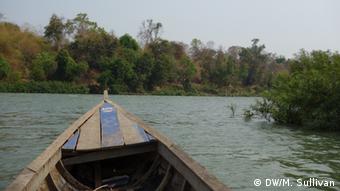 Little to see on a boat trip through Hou Sahong channel.

To be fair, there are only a handful of dolphins living here; the biggest concentration - some 120 dolphins in total - live 130 kilometers downstream near the Cambodian town of Kratie. But it's not just dolphins environmentalists worry about. It's the entire ecosystem downriver.

A fatal project - or scaremongering?

My driver points the boat up the Hou Sahong channel towards the proposed dam site, and 20 minutes later - by boat and on foot - we arrive. There's not much to see - not yet anyway - just a fast moving section of water, maybe 50 yards wide, bounded by dense jungle on either side.

The Hou Sahong is one of nearly a dozen channels of the Mekong here in the Si Phan Don region which come back together in the pool below. My first thought is: what's the big deal? Why does damming just one channel of the river here scare so many people?

Environmentalists say it's the only one that works - for fish.

"The Hou Sahong channel is right now the only channel that fish are able to migrate up and downstream on a year-round basis," says Trandem. "Other channels all have obstacles - waterfalls or man-made structures that catch fish."

Hawkins says there are at least two other channels fish use in the dry season. And he says his company is helping modify those channels in addition to building fish passageways around the proposed Don Sahong site to allow fish to migrate freely. 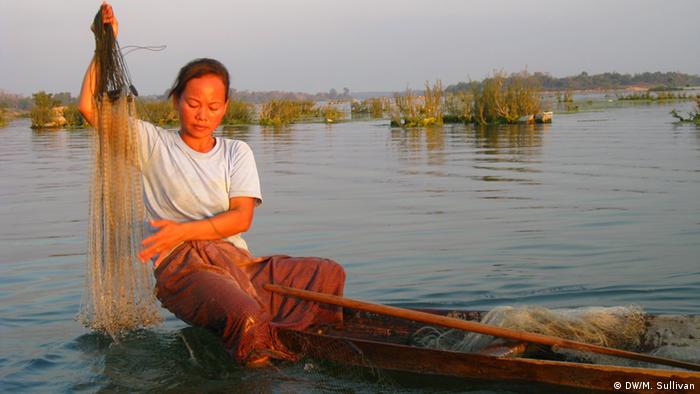 Fishing families fear for their livelihood.

"We are constructing, designing and building bypasses, identifying channels which are shallow and deepening those particular points, key points where the fish are held up. Our strategy is to keep doing that, constructing alternative pathways."

'No more fishing after dam'

Amy Trandem from International Rivers isn't convinced. And neither are many of those who live here. Almost all of them fish for a living, and while the dam might bring temporary construction jobs, what happens afterwards?

A local whose family has fished here for generations - and who doesn't want to be named - isn't optimistic.

"We export the fish in this area every season, so if the hydropower dam comes, all the people (who fish for a living will have) no more jobs," he says. "No more fishing after dam."

He says almost everyone who lives in the villages around here say the same thing - or would, if they were allowed to speak openly. But Laos is a one-party communist state where dissent isn't tolerated. What would happen if you did speak out against the dam, I ask him. He makes a slashing gesture across his throat.

"We have no against," he says. "If they do a thing, then we follow them. We cannot say no."

A few hundred miles upstream, there's another work in progress, which environmentalists fear even more: the Xayaburi Dam. Unlike the Don Sahang, this dam - which the government says is about 30 percent completed - will block the entire river.

Jian-hua Meng, a hydropower and dams specialist with the World Wildlife Fund, says the Xayaburi Dam is being built without any real knowledge of the downstream effects. 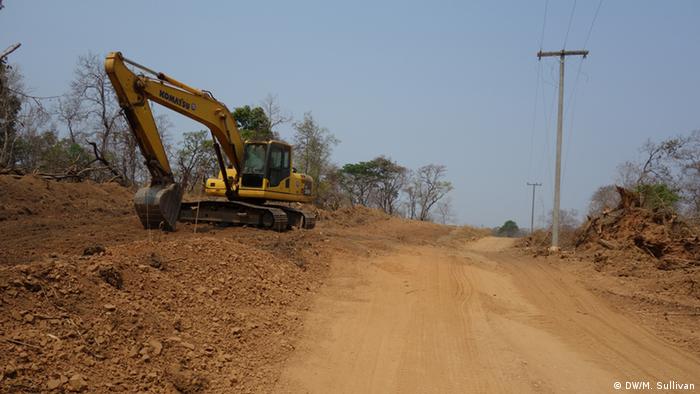 The controversial Xayaburi Dam is already under construction.

"We do see that Laos has every right to develop on its own pathway and should not be controlled by outside people them telling what to do and what not to do," Meng says. "But maybe in terms of the Mekong main stem, they have been listening to the wrong advisers."

Building dams isn't the same as building shopping centers or airports, Meng says. Water, he says, punishes every mistake you make - especially when it comes to fish migration. Fish passages, fish lifts, sluice gates have all been proven effective elsewhere, he says, but not on the Mekong - the world's most productive fishery.

Many species in danger

Hydropower on the Mekong - Progress or folly?

"The effectiveness of such fish passage mechanisms is quite OK, let's say, quite well proven for European or North American rivers, where we have small number of species that are well known," Meng says.

"But in the Mekong, we don't have five fish species which we have to take care of, we have 70, maybe even more, and we have no clue about them. So building something for them to migrate up and down with, that's just guessing at the moment," Meng adds.

Trandem of International Rivers says fisheries experts estimate that at least 43 species of fish are likely to go extinct because of the impact of the dam, including the Mekong giant catfish - the worlds largest. Sedimentation, the silt the river carries downstream to Cambodia and Vietnam - the so called rice bowl of Southeast Asia - is another problem.

Environmentalists and Laos' downstream neighbors Cambodia and Vietnam worry the Xayaburi might trap the silt that would otherwise make its way downriver, stressing the already shrinking Mekong Delta even more. Marc Goichot is with the World Wildlife Fund's Greater Mekong Program.

"Both the impacts of fish migration and on sediment are very serious. And mitigation measures haven't been demonstrated because of important data gaps and because there is no precedence of success of mitigation of this kind in any large tropical river in the world."

Scientists have discovered 367 new species in the Greater Mekong region over the past two years, including an eyeless spider and a huge flying frog. Some 26 new species have been discovered in Myanmar alone. (05.06.2014)

As Laos pushes on with plans to become a hydroelectric powerhouse for the region, wheels have been set back in motion to build a giant dam on the Mekong River. However, there are fears it could set a dangerous precedent. (06.11.2012)

But the Laos government remains unconvinced, undeterred and defiant. In a strongly worded editorial last month, Viraphonh Viravong - the Lao Deputy Minister of Energy - accused dam opponents of fear mongering. He insisted mitigation measures in place will actually help increase the fish population in the river.

He also says Laos has acted in good faith in notifying its Mekong neighbors of its intentions as specified by the Mekong Commission. Downstream neighbors Cambodia and Vietnam are skeptical. Like the environmentalists, they want both projects suspended for further review. Neighboring Thailand - whose banks financed the Xayaburi, whose electricity will be sold to Thailand - has been largely silent on the issue. The WWF's Marc Goichot fears the worst.

"The Mekong Delta is highly sensitive to changes of sediment delivery to the basin. The impacts of the Xayaburi will be cumulative, rapid and serious, with socioeconomic as well as other consequences for Cambodia and Vietnam that will be possibly massive.”

The Xayaburi is nearly half completed. Construction on the Don Sahong, on the border with Cambodia, is just beginning.

Laos has several more dams planned for the Mekong as well as dozens more on its tributaries as it tries to realize its dream of being the "battery of Southeast Asia." Traditional fossil fuels - oil, gas and coal - won't be enough to meet demand.

Hydropower - done right - can be part of the solution. But environmentalists continue to be concerned that neither of the dams Laos is building on the Mekong fits that description.

Laos - Fighting to Save Its Forests