A proposal by the Indonesian government intended to prevent wildfires has been criticized by local environmental groups. The plan would give developers new land in exchange for restoring wetland destroyed by plantations. 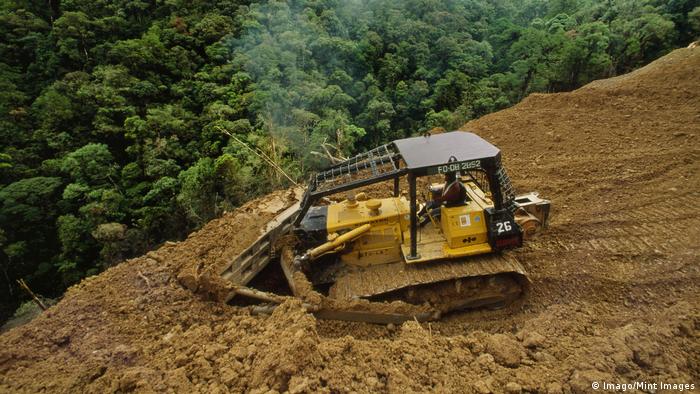 Researchers in Indonesia are criticizing a plan by the Indonesian government that would give plantation companies new land in exchange for restoring land they destroyed. The Anti-Forestry Mafia Coalition, an Indonesian civil society group, said that the land swap plan would put the country's remaining natural rainforests at risk, especially in Sumatra, Kalimantan, Sulawesi and Papua.

The policy was proposed in 2017 by the Indonesian Ministry of Environment and Forestry. It is an attempt to avoid wildfires like those that broke out in 2015 across wide areas of cleared swampland that were drained by industrial plantations. The policy would allow developers to request new land in exchange for "re-wetting" the peatland, after which it would no longer be used for plantations.

However, according to environmental groups, the "substituted" land would be previously untouched rainforest. The Anti-Forestry Mafia Coalition said that 40 percent of the designated 921,000 hectares (3,556 square miles) is natural forest.

"The areas for land swaps are spread across most of Indonesia's big islands [except Java], including Sumatra, Kalimantan, Sulawesi, Maluku, Nusa Tenggara, and Papua," said Fitra. He added that out of the 19 provinces allocated for the land swaps, only West Sumatra, Riau, South Sumatra, West Nusa Tenggara and Central Sulawesi do not contain natural forests.

"However, areas in those five provinces are relatively small, amounting to only 3 percent of the overall allocation," said Fitra.

Indonesian development conglomerates that would receive land swaps under the proposal include Sinar Mas and APRIL. Agus Purnomo, the managing director of the palm oil branch of Sinar Mas, told DW that relocating plantations would come at a loss for the company, with issues including timing, location and size of new plantations.

"It takes at least five years from replanting the seeds to harvesting them," said Purnomo, adding that his company is ready to discuss with the Indonesian government about restoring peatlands. "We need more than 5,000 hectares (12,300 acres) for one plantation block," he said. "We would not get any profit if we plant our trees in divided small areas."

Additionally, the location of the swaps is still unclear. "It is impossible for us to plant palm oil in Papua, for instance, if the land is not suitable for that," added Purnomo.

Companies can just 'walk away'

The Anti-Forestry Mafia Coalition said that the plan does not provide a strict, legally binding mechanism to ensure that the plantation companies will bear the cost for their restoration.

"Land swap areas should only be implemented after the company first restores the drained peatlands," said Fitra. "Once the restoration is considered successful, then the ministry can provide the replacement lands. Without this provision, the companies can simply walk away from the disaster they have created."

Fitra added that without strict conditions, restoration may never take place and abandoned areas would be vulnerable to catastrophic fires for decades to come.

The coalition said the Indonesian government must conduct an in-depth review of the proposed land swap areas through a transparent scheme. Deforestation should be minimized and social conflict with local communities or indigenous peoples must be avoided, it noted. Officials from the Indonesian forestry ministry did not respond to DW's requests for comment.

Restoring Indonesia's peatlands is very important to reduce the impact of large-scale fires. According to scientists at the University of Queensland, forest fire in Indonesia has already caused more than 100,000 premature deaths, destroyed the habitats of threatened species and released greenhouse gases.

Amanda Hansson, a PhD candidate at the University of Queensland's School of Earth and Environmental Sciences, estimates that Indonesia's goal to restore 2 million hectares (over 6.4 billion acres) of peatland may require more than $4.6 billion (€4.3 billion).

The World Bank says on its website that in a five-month period in 2015, man-made fire cost Indonesia as much as $16.1 billion. At the time, about 2.6 million hectares, or an area four times the size of Bali, burned in eight provinces. According to the World Bank, peatland restoration can play a vital role in solving Indonesia's fire and haze problem, but it should be complemented with strong conservation measures.

Indonesia is the scene of massive deforestation – most of it illegal slash and burn. (25.07.2018)

Refugees in Indonesia learn to beat doom and gloom

A bleak future combined with barriers to work and education is a recipe for disaster for refugees in Indonesia. But some enterprising souls have found ways out of the doldrums. Gemima Harvey reports from Jakarta. (07.08.2018)