Land grabbing in Ethiopia - foreign investors and famine | World | Breaking news and perspectives from around the globe | DW | 31.08.2011

Although one in 10 Ethiopians is going hungry, the government is leasing fertile land to foreign investors. Deutsche Welle spoke with Essayas Kebede from the Ethiopian government about so-called land grabbing. 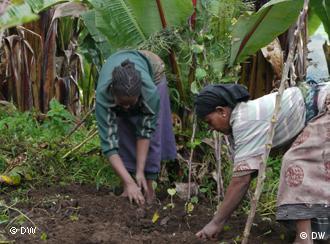 Farmers cannot own land in Ethiopia, they must least it

Countries in Asia and the Gulf - such as China, India and Saudi Arabia - have rushed to foreign countries to buy farmland to grow crops for their own people. Food price inflation in recent years has highlighted the need for greater food security.

Africa has become a prime target, despite concerns about the impact on the world's poorest people. Locals have nicknamed the practice "land grabbing."

Essayas Kebede is the director of the Ethiopian government's Agricultural Investment Agency and is responsible for the contractual agreements with foreign investors regarding Ethiopian farmland.

Deutsche Welle: Mr. Essayas, Ethiopia is experiencing a severe famine right now. Despite this, you have been tasked by the government to lease huge swaths of land to foreign companies. Critics have called this irresponsible. Are you acting in bad faith?

Essayas Kebede: Agriculture is the backbone of the Ethiopian economy. Fifteen million hectares of land are being worked by farmers and another 15 million are lying fallow. The Ethiopian government's five-year development plan aims to increase the productivity of subsistence farmers, which is why we've turned our attention to commercial agriculture operations that can help our farmers increase their revenues. 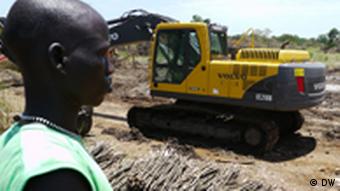 The Indian investors clear Ethiopian land, but who profits?

Of the 15 million hectares of fallow land that I mentioned, we identified 3.6 million that are suitable for commercial farming. But for that we need investors. They can come from Ethiopia or from abroad, it doesn't matter to us, but we urgently need capital and modern technology to increase our agricultural sector output. That way we can boost our foreign currency stocks and create jobs.

Are you saying that this policy can help solve Ethiopia's hunger problems?

We have to increase productivity, but we also have to increase the buying power of our people. It's the only way they are going to be able to afford food. The sale of goods produced on large farms will bring in desperately needed foreign currency, with which we can introduce modern production methods.

Ethiopian farmers are not allowed to own land, rather they lease it. Wouldn't it be better to make life easier for them with microcredits, improved market access and roads than accommodating investors from India and China?

We are in the process now of regulating land ownership questions and have already granted the first land titles. Regarding infrastructure, the government has paved many kilometers of roads and built new ones. We have established government offices that support local farmers.

A full 85 percent of our population work as small farmers in rural areas and if we really want to stimulate the economy of our country, we have to improve the conditions our farmers live and work under. The foreign companies bring technology that helps our own farmers. Investors build bridges, schools and hospitals, and people here benefit from those. 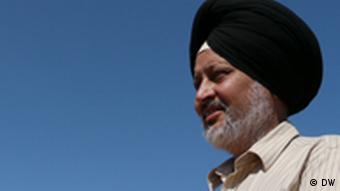 There are rumors that the Indian Karuturi Global company has leased the Gambella farm in the west of the country, which has 300,000 hectares of land, in order to push up its stock price on the Mumbai stock exchange. However, most of the farm is still lying fallow. Where is the technology you were talking about, as well as the schools, hospitals and all the jobs?

We signed an agreement with Karuturi and they are working on it. Developing farmland doesn't happen overnight. We want to help investors have successful relationships with us.

But the success doesn't seem to be happening. You have already threatened to take back 200,000 hectares if there is no significant progress within two years. Something has obviously gone wrong. How much time does Karuturi have?

When the time comes, we will sit down together. The clearing of vegetation takes time and right now, we can't really judge Karuturi's performance. He has two years to cultivate the first 100,000 hectares and then one year for an additional 50,000.

The Gambella farm is the size of Luxemburg

To increase the food supply in the country, at least part of the harvest has to be sold on the local market. Was that a stipulation in the contracts with the big multinationals?

It's not our task to take revenue away from investors. As I said, we want to increase the purchasing power of our people so that they can afford to buy corn from Karuturi. If the investors can get a good price here in this country, they will sell here.

Four decades after Ethiopia's first famine, your country is suffering again. Has the government done enough to try to break this vicious circle of hunger and poverty?

There are 1.2 billion people suffering from hunger around the world. It's a growing, global problem and we are part of a globalized world. If it rains less in Europe, we feel it here. You see, in the 70s we had a population of 25 million, today it's 80 million. So hunger is not as widespread as it was then and today our food reserves are higher. In the 70s, the government didn't have the situation under control. The current administration, however, knows what it's doing. In fact, the chances are good that Ethiopia will be able to contribute to the global food supply in the future. We have enough land.

Some 120,000 refugees fleeing drought and violence are stranded in the Dolo Ado camp on the border between Ethiopia, Somalia and Kenya. Though they're receiving food and medical care, many face an uncertain future. (25.08.2011)

Somalia continues to reel from famine and civil war. Deutsche Welle spoke with Somalia expert Markus Höhne about the country's problems and a possible way forward. (29.08.2011)

African countries have pledged around $380 million as they attempt to bring relief to millions suffering famine in the Horn of Africa. The region's worst drought in decades has already claimed tens of thousands of lives. (25.08.2011)