Somali refugees stuck in limbo in Ethiopian camp | World| Breaking news and perspectives from around the globe | DW | 25.08.2011

Some 120,000 refugees fleeing drought and violence are stranded in the Dolo Ado camp on the border between Ethiopia, Somalia and Kenya. Though they're receiving food and medical care, many face an uncertain future. 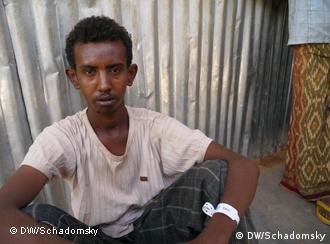 Sherif Dahir arrived from Mogadishu to Camp Dolo Ado in southern Ethiopia. The journey, made partly on foot and on minibuses, took him a week. His eyes are red-rimmed, he speaks quickly and constantly looks for help to the people around him.

"Everything is destroyed in Mogadishu," the 18-year-old says. "There is no government to protect us."

Somali has been hit by the worst drought in decades, putting 3.7 million Somalis at risk of starvation. In addition, ordinary Somalis face other potent threats - the weapons and violence of the dreaded al Qaeda inspired al-Shabaab militia who have been waging a four-year insurgency.

"They come in the night and pick up young men like me from their homes and force them to fight," Sherif says. The men are deployed against government forces and peacekeeping troops of the African Union, he adds. Those who refuse to take up arms are simply shot.

Sherif Dahir stands in line in front of the United Nations High Commissioner for Refugees transit center at Dolo Ado. Next to him, 67-year-old Kusow Mayo Hassen too waits along with his family.

After the death of his wife, Kusow along with his daughter Halima and her two-year-old daughter made their way on foot for 10 days through rough terrain, dodging al Shabab battle lines, until they reached Camp Dolo Ado. 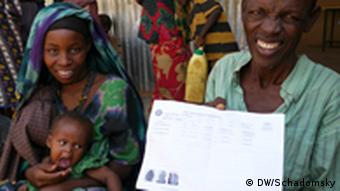 Kusow Mayo Hassen, right, with his family at the Dolo Ado camp

"I still had one camel; the others died earlier in the famine," Kusow says. "So I then sold my last animal so that we could buy some food for ourselves and the child on the way," he says.

After a month in the Dolo Ado camp, Kusow's family is being moved to the tent city of Hiloweyn, 30 kilometers (18 miles) away. It's home to some 35,000 refugees.

Kusow is visibly upset at the thought that in light of the desperate situation in his home country he is likely to spend the next months - or years - in the new shelter.

While the Kusows and dozens of families like his are moved to buses that will take them to the new site, doctors at the Dolo Ado camp are busy attending to the new arrivals.

Infants are weighed and measured in blue plastic buckets in order to diagnose any development deficiencies. 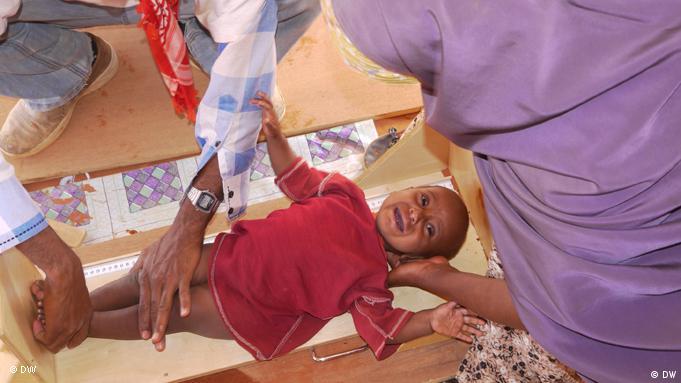 Malnourished infants arriving at the camp are checked for development problems

"Around 1,200 new refugees arrive here every day, of which we screen about 600," Phil James, an aid worker from charity "Action Against Hunger," says. Between 30 and 60 percent of the children are malnourished, he says.

The emergency medical wards at Dolo Ado are operated by French and Dutch nationals. This is where the most serious illnesses are treated. Children receive liquids fortified with vitamins and proteins as well as antibiotics against several infections. The camp has already witnessed the first cases of measles and a possible outbreak of cholera remains a constant threat.

The aid workers here are urgently awaiting the arrival of a water treatment facility from Germany's DTH development agency which offers technical assistance. The tank has been held up by customs authorities in Ethiopia. Until that arrives, daily water rations at the camp have been reduced to three liters from 10.

Read more about the refugees' plight

Moving to a new home

By late afternoon, the Kusow family finally arrives at the new camp after a long journey over largely dirt roads. This is where they are set to begin a new life.

The white tents with the blue UN logo stretch out as far as the eye can see. There are even a few small shops here that sell biscuits and a few onions. A Somali mobile phone card costs 44 Ethiopian Birr - that's about 2 euros ($3). It's a lifeline for those who can afford to contact loved ones back home.

The Kusows are welcomed by Anna Menuto from the UNHCR. "They can first claim a two-day ration of warm food," the Spanish national explains. "In addition, they'll get plastic canisters, a bucket, soap, sleeping mattresses, cooking utensils and a blanket for the night," she says. 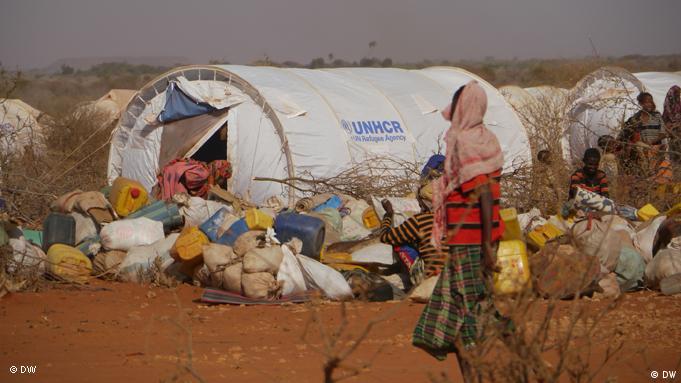 Many refugees will probably spend months or years in camps

Halima Kusow's two-year-old daughter is measured and weighed. The doctors are satisfied - she's apparently recovered well in Dolo Ado from the strenuous trek over the Somalia-Ethiopia border.

Just before sunset, the Ethiopian nurses at the camp load the medical equipment in all-terrain vehicles and drive back to the main camp. They'll be back the next day at 6 a.m. - a time when the heat is still bearable. They will examine some 600 children and a few will be moved to the emergency stations.

"My granddaughter is doing well," he says. He likes the new camp too.

"We'll get enough food to eat here and will receive medical treatment," he says. "Yes, we're in good hands here."

African countries have pledged around $380 million as they attempt to bring relief to millions suffering famine in the Horn of Africa. The region's worst drought in decades has already claimed tens of thousands of lives. (25.08.2011)

Food not getting to Somalis, refugee camp bursting at seams

As Somali refugees continue to pour in, the situation in the world's largest refugee camp in Dadaab, Kenya is worsening. It's a paradigm example of the problems of getting food aid to those threatened with starvation. (16.08.2011)