African countries have pledged around $380 million as they attempt to bring relief to millions suffering famine in the Horn of Africa. The region's worst drought in decades has already claimed tens of thousands of lives. 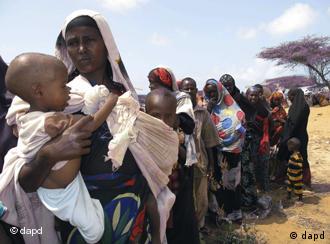 Hundreds of thousands have been displaced by the drought

African states pledged nearly $380 million (264 million euros) at a much-delayed donor's conference in the Ethiopian capital, Addis Ababa, on Thursday in a bid to put a halt to a crippling famine afflicting much of the Horn of Africa.

The AU meeting was called to plug an aid shortfall of some $2 billion needed for millions facing starvation during one of the region's worst droughts in decades.

According to the 54-member organization's official donor conference website, the aid will go towards emergency intervention and recovery projects.

United Nations Deputy Secretary-General Asha-Rose Migiro told African leaders "the conference sends a clear message to the world: the African Union remains fully engaged with this crisis, and is taking a leading role in all our efforts to save lives."

Hopes of meeting the pledge target were dealt a blow early on when only four African heads of state confirmed their attendance at the Ethiopia summit despite furious criticism of the continent's response to the crisis. African Union chairman Teodoro Obiang Nguema, Ethiopian Prime Minister Meles Zenawi, Djiboutian President Ismael Omar Guelleh and Somali leader Sharif Sheikh Ahmed were in attendance.

The United Nations has said around $2.4 billion was needed to help victims of the drought, which has left an estimated 12.4 million people spread across Somalia, Ethiopia, Djibouti, Kenya and Uganda in dire need of aid. Tens of thousands are estimated to have already perished.

The crisis has also led to significant movements of people seeking food and shelter, with around 76,000 Somalis having arrived at the Dolo Ado refugee camp since January.

Aid has already come from the United States, European Union, China, Japan, Brazil and Turkey, as well as from the Organization of Islamic Cooperation. But those pledges fell short of requested sums.

Turkey's prime minister has made a historic visit to famine-stricken Somalia, positioning Ankara at the forefront of the push for food relief. Turkey is striving to reshape its diplomatic ties with Africa. (19.08.2011)

Leaders of more than 40 Muslim countries have agreed on a major aid program for Somalia at an emergency conference. Turkey, which organized the meeting, is taking on an increasingly active role in Africa. (17.08.2011)