Labor movements around the world mark May 1 under lockdown

May Day is a public holiday and International Workers' Day in countries from Indonesia to Finland. Protests are impossible for many, so labor groups have been forced to improvise — or to defy bans. 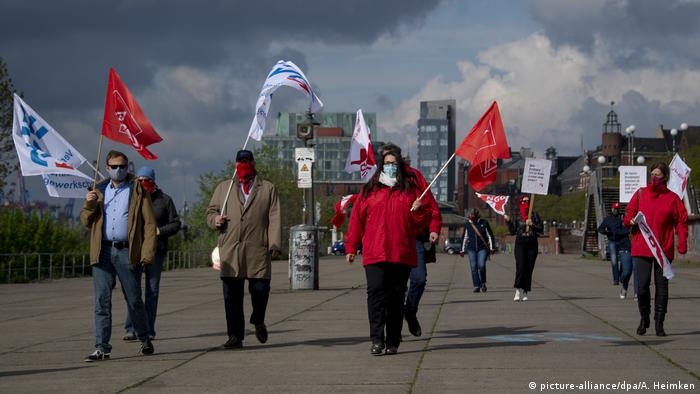 With restrictions owing to the coronavirus pandemic in place around the world, many labor groups are marking the International Workers' Day on Friday in subdued fashion.

But as a global coronavirus-induced recession rears its head, some leaders say that protests on the public holiday are more important than ever. 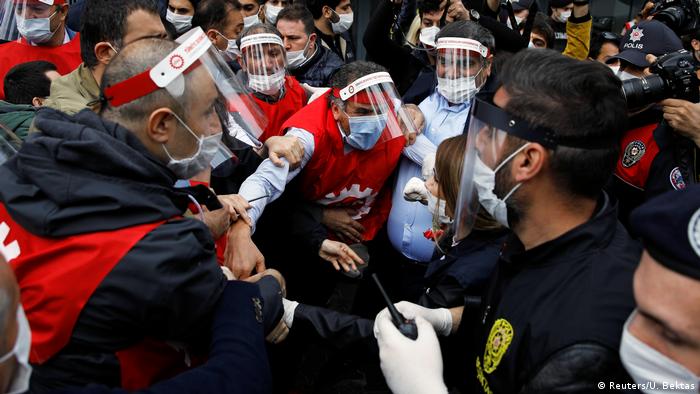 Turkish protesters were arrested by police

Police in Istanbul detained 15 trade unionists on Friday morning, blocking their attempt to defy a curfew. The groups planned to ignore the lockdown and march to the iconic Taksim Square.

The square has been the home to many left-wing protests to mark Workers' Day over the years, leading to massacres in 1969 and 1977. Police had cordoned off the headquarters of labour union DISK and had apparently offered to drive members to the square to lay wreaths, allowing them to respect the curfew.

The trade unionists were arrested for "harm to public order" and for ignoring a three-day lockdown currently in place.

DISK chairwoman Arzu Cerkezoglu defended the protest, telling local broadcaster Tele 1 "Today, across Turkey ... millions of workers work face to face with the virus in factories and on construction sites and it doesn't affect public order." 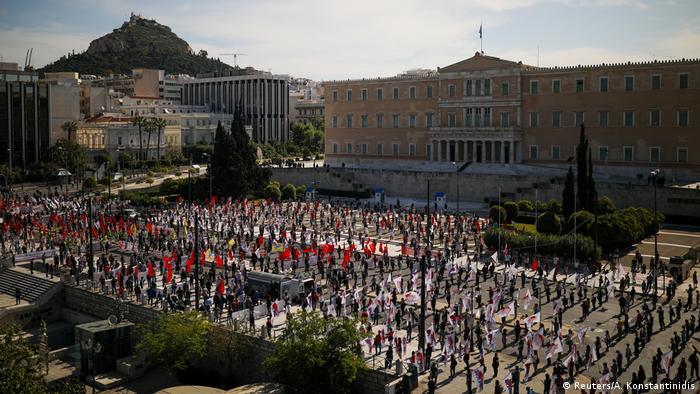 Workers and students in Athens lined up outside the Greek parliament, wearing masks and gloves and using plastic markers to respect a distance between each other.

The protest was organized by the communist-affiliated group PAME and was in defiance of a ban on public movement.

Protesters chanted slogans like "No sacrifice for the bosses."

The Greek economy has been hard-hit by the coronavirus lockdown. Some shops and other businesses began to reopen this week as lockdown restrictions are gradually eased.

Hundreds of residents also took to the streets in other Greek cities.

People throughout Germany marked the day a little differently than previous years. May 1 is typically marked with loud protests and crowded streets.

This year, events and rallies were canceled in cities throughout the country due to the coronavirus pandemic. The government has authorized around 20 small demonstrations in Berlin, each with no more than 20 participants allowed.

"The police will have to intervene early," said Geisel, referring to unauthorized demonstrations, adding that protection against viral transmission must be enforced.

Read more: Germany deploys thousands of police to crack down on unauthorized protesters

In other parts of the world, labor movements encouraged their workers to go online. Workers in France were encouraged to make their grievances heard online.

"This is an opportunity to bear the social demands that we have been defending for a long time and the crisis has highlighted," said Philippe Martinez of the umbrella trade union CGT.

Meanwhile, far-right leader Marine Le Pen ignored advice and pressed ahead with her party's annual tradition of laying a wreath in honor of Joan of Arc. Le Pen sees the Maid of Orleans, a famous French martyr, as a national symbol. Le Pen's party has been critical of President Emmanuel Macron's handling of the crisis.

Trade unions in the Philippines and Indonesia also encouraged their members to take to social media instead of the streets. Authorities in the Philippines arrested at least three people, where rights groups say around 23 million people are facing hunger as they cannot work owing to the coronavirus lockdown.

Riot police in Hong Kong also mobilized for pro-democracy protests. The rally proved smaller than anticipated in the semi-autonomous city, where large regular protests have been forced to scale down under coronavirus restrictions.

In Finland, labor rallies are traditionally followed by large picnics in public spaces to mark spring. This year Helsinki's Manta statue, the traditional epicenter of the revelry, was boarded up and only a few people gathered. Finland has a ban on gatherings of more than ten people in place.

German labor minister calls for right to work from home

Coronavirus has forced millions of Germans to work remotely. One minister wants this to continue, even after the threat from the virus has passed. (26.04.2020)

In Germany, about 600,000 care workers from abroad care for sick and elderly people. Most of them come from Poland — and right now they're having huge problems entering and leaving Germany. (18.03.2020)