Around a thousand people have ignored a ban on groups of more than 20 to gather in Berlin to mark the annual holiday for workers' rights. Authorities deployed 5,000 police officers to break up unauthorized protests. 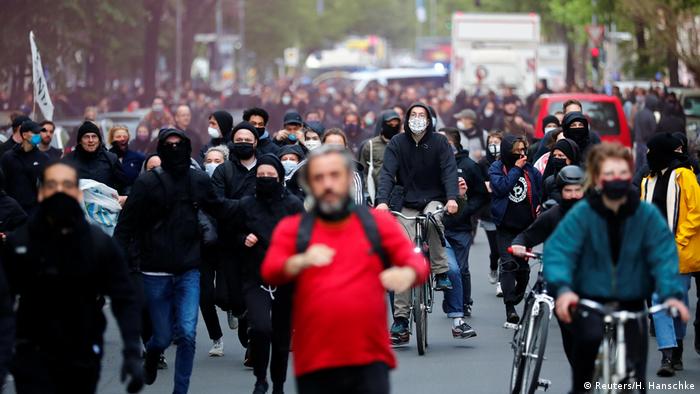 While most German workers marked Labor Day online, more than 1,000 people rallied illegally in the Berlin neighborhood of Kreuzberg the traditional center for left-wing May Day protests, on Friday evening.

The protesters ignored a ban on public gatherings of more than 20 people due to the coronavirus pandemic.

Dozens of people also tried to gather illegally in the square in front of Berlin’s Volksbühne Theater. Police erected gates around the square as a deterrent, and some individuals were detained.

Leftist groups had called for the protest to speak out against capitalism and to call for greater solidarity, especially with refugees trying to come to Europe. The protest, as in past years, was not registered with the authorities. Much of the protest was dedicated to calling for action on Moria, the overcrowded refugee camp on the Greek island of Lesbos.

At regular intervals, demonstrators would disperse and then reassemble at different locations in Kreuzberg announced by the protest organizers. Demonstrators were instructed by organizers to wear masks and to keep a minimum distance between themselves and others, but some streets were reported to have hundreds of people gathered together.

A police spokeswoman said the protest had remained largely peaceful.

"We have prevented the parade from growing bigger and are using loudspeakers to urge people to disperse," the spokeswoman said.

At least one instance of violence erupted, however, when a camera crew working for German broadcaster ZDF was attacked in the center of the city. German news agency DPA reported that four people had been hospitalized with injuries.

Police said the crew was assaulted by a group of seven people, a number that was later revised up to 15. Six people had been arrested, they said. The reason for the attack was not immediately clear.

"Freedom of [the] press, especially now, is especially valuable. Our first concern in this instance, however, is with the team members and their health." ZDF’s program director Norbert Himmler said.

While protests on May 1 have largely been peaceful in past years, infection control is paramount during the pandemic, leading Berlin authorities to send out around 5,000 police officers across the capital to break up any unauthorized protests or gatherings that violate social-distancing rules.

The first of May, the annual holiday for workers' rights, is typically marked with loud protests and crowded streets. But this year, most protest organizers including the German Trade Union Confederation (DGB) and the Social Democratic Party (SPD) are hosted online events to mark the occasion.

On the eve of Labor Day, Berlin police broke up crowds flouting coronavirus measures in Berlin-Friedrichshain, but the evening was generally peaceful, public broadcaster RBB reported.

Thursday had also marked Walpurgis Night, a festival that celebrates the shift from long, dark winter days to sunnier, longer spring days. The Walpurgis evening is typically celebrated with picnics, parties and bonfires.

In recent weeks, other demonstrators have gathered in Berlin despite coronavirus measures, among them various extremist groups from across Germany's political spectrum.

Right-wing extremists have also planned to stage a small protest on Friday, according to the German Press Agency (DPA).

A major protest usually organized by hard-left groups on Labor Day evening has been canceled, DPA reported, adding that some radical activists have called instead for spontaneous demonstrations.

A few dozen people from left-wing groups had gathered on Thursday in Berlin's Rigaer Strasse and Liebigstrasse. Police officers were reportedly seen pushing protesters in an attempt to disperse the crowds.

There is increasing dissent against social distancing rules, which had previously had broad public backing. That could have fatal consequences, writes DW's Martin Muno. (30.04.2020)

German May Day protests draw tens of thousands to the streets

German unions have called on workers to take to the streets to push for a Europewide minimum wage. Organizers also called for stronger collective bargaining rights and urged workers to vote in upcoming EU elections. (01.05.2019)

Marchers around the world have used May Day to hold rallies to voice dissatisfaction with their governments. There were mass arrests in Turkey, as well as violence in the French capital, Paris.

Russia's war in Ukraine was the dominant theme of May 1 Labor Day marches across Germany. The day also saw scuffles in the western city of Dortmund.